Dan Snyder Helps Us Demonstrate The Streisand Effect In Numbers

Having coined the term “The Streisand Effect” a while back, I’m always interested in more examples of it in action. We recently talked about how Washington Redskins owner Dan Snyder sued the Washington City Paper over a tongue-in-cheek article criticizing him, and the response may actually give us some Streisand Effect data. Paul Alan Levy sends over a neat blog post from Tech Cocktail that tries to quantify how much more attention was driven to the article Snyder was so upset about. The answer? An awful lot. 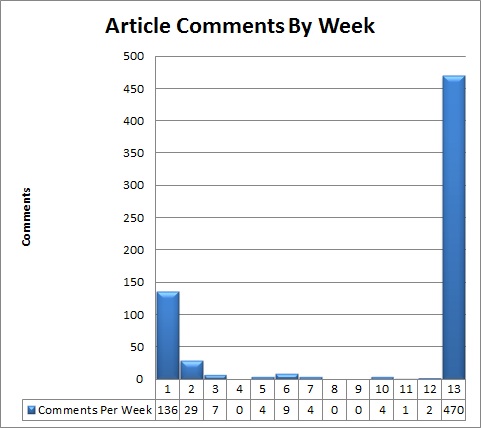 As you can see, the article got a bunch of comments early on, and then it died out, as comments tend to do. Then the lawsuit hit. And suddenly the article got more than twice as many comments as it had accumulated up until then. And, of course, the story spread via social networking services as well:

The article garnered 554 tweets and over 7,000 Facebook (FB) likes. A quick survey of City Paper articles shows that few, if any, other articles by Mr. McKenna rate more than 5 comments, tweets or FB likes.

So by suing, Snyder helped drive a ton more traffic to the article that was critical of him. And if you think that within all that traffic some folks are agreeing with Snyder’s take on things… again that doesn’t appear to be the case:

Activity on the Paper?s Facebook Group has increased and is overwhelmingly supportive, as is the Twittosphere.  Sentiment towards Snyder is unanimously negative as measured by tools like Tweet Feel which at my last count showed a 100% anti-Snyder rating, well below Hosni Mubarak who came in at 67% negative.

Yeah. Perhaps next time, before suing over some minor criticism, people might take such results into account.

LOL. There was another example of the Streisand Effect here in Mexico two days ago. There had been some silly rumours on Twitter going around that the President Felipe Calder?n drinks a little too much. (I wouldn’t jump to conclusions myself about their truth or falseness, but what happened later is suspicious.)

Some congressmen from one of the opposition parties displayed during the session a big banner that read “You wouldn’t let a drunk drive your car. Why do you let one run your country?”. A journalist called Carmen Aristegui, while reporting this incident in her radio program, asked the Presidency to give a statement on the truth of such accusation. She was fired!

What’s Streisandish here is that the firing brought the alcoholism gossip to a whole new level, even turning #Aristegui into a worldwide trending topic for a day, and a Mexican trending topic for two and a half. I guess censorship never fails to backfire.

PS. The government denies having a hand in this issue, but at the very least, there is a certain chilling effect on free speech even if it’s a free decision by a privately owned broadcasting company.

It’s worth noting that those twitter sentiment tools are pretty flaky. They just do word association, and it’s pretty inaccurate

For example, I just tried “mubarak” on Tweet Feel. Apparently a lot of people are currently retweeting someone’s gaffe that he is “the best thing to happen to comedians since George Bush”, which would seem to be negative or at best neutral – and yet because of the word “best” they are all being counted as positive.

I suspect that sentiment is still pretty anti-Snyder, but I’m not sure the Tweet Feel numbers mean a whole lot.

I wonder if it would be counted as negative if someone tweeted “I hate all those anti-semites for what they did to poor Dan Snyder”?

I live in the DC area and I can say that the radio media coverage (regardless of station) is universally negative. Except for the station that Snyder owns of course.

Here’s what’s really strange. The word is out that Tony Wylie was the man behind the lawsuit. He himself admitted it to Brian Mitchell and Snyder threw him under the bus during other interviews.

You mean to tell me that one of the most lauded PR men in sports, didn’t know that this would be the result?!?!? Are you kidding me?

Yeah it definitely appears that, in this case, the sentiment is genuinely negative, and the Twitter poll was fairly accurate. Nonetheless, twitter sentiment measures are useless for actually determining anything.

“TAM sure is great at obfuscation and logical fallacies.”

Completely agree, and I didn’t mean to dilute your point. Been waiting decades for AI and language processing to “get over the hump” and we’re still just taking baby steps.

Agreed. Though we’ve got one playing Jeopardy! now so it seems the steps are getting a little bigger at least 🙂

…”Babs” to sue Mike for coining the term “The Streisand Effect”, which then I suppose would prompt the coining of a new term like “The Streisand Wormhole” to allude to instances where people who do stupid things sue those that give those acts catchy names.

‘…”Babs” to sue Mike for coining the term “The Streisand Effect”, which then I suppose would prompt the coining of a new term like “The Streisand Wormhole” to allude to instances where people who do stupid things sue those that give those acts catchy names.’

I can see how number of commentators is at least one viable metric, but wouldn’t it be more reasonable to see what appened to the Pagehits/Views of the page? Maybe there is a straight correlation between number of commentators and number of vistors,but maybe it isn’t? I’m interested in finding how much attention was driven to the story rather than the number of people who decided they had something to say about it.

This just goes to show how you can prove anything with statistics. Your pretty bar graphs mean nothing compared to the moral facts.

Why don?t you give any space to the opposing view? You need another chart showing how the article has shrunk in and collapsed on itself in shame since dear, respected Mr Snyder pointed out how hurtful it was. Then your coverage would be more Fair and Balanced.

If you think that you’re an idiot. No one likes Snyder. He’s the guy who sued fans who were too poor to pay for their tickets.

Yeah, that’s the way to build up fan base. Sue your biggest fans when they’re down.

Sued fans, banned posters in the stadium, charges full price for preseason games, charges for tickets to observe training camp, clamped down on tailgating, charges some of the highest prices in the league for parking, got the local authorities to restrict competing local parking under the auspices of pedestrian safety, has a standing policy that employees cannot look him in the eye in his presence… Ummm… yeah, that guy.

I didn’t know Steve Jobs was like that, but I suppose I shouldn’t be surprised.

dan snyder is the reason the redskins are a joke. after this and suing season fans i am likely to start rooting for someone who gives a damn. you know, like detroit.

I live in the area, but didn’t know about the article until the lawsuit. So I read it, and I must admit, I didn’t realize just how actively hostile Snyder is to Redskins fans. The stuff I’d heard of (not nearly all of it) was stuff where my reaction was something like, “Wow, that’s stupid”, and then I’d forget about it.

How did this man get enough money to buy the team, again?

Shoplifting. He walked out of the store with the Redskins while the salesman was distracted.