When a person’s whole job revolves around managing and licensing a catalogue of copyrights, it’s hardly surprising (if still disappointing) when they freak out about unauthorized sharing. So it’s really nice to see someone in that exact position taking the opposite tack, as recently happened when a comparative Then & Now photo of Meryl Streep (which demonstrates that she may be some kind of magical ageless faerie) shot up the Reddit charts (thanks to Andy for sending this in): 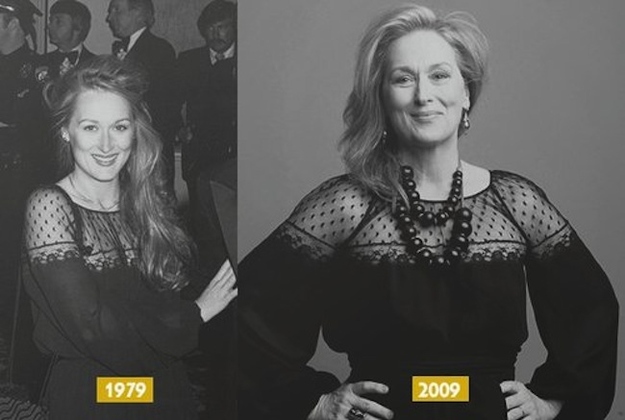 The 1979 photo is by famous pioneer-paparazzo Ron Gelella. The archive director for the company that manages his copyrights saw the image and showed up in the Reddit comments… with additional info and a link to related photos. This garnered a very positive reaction from the community: 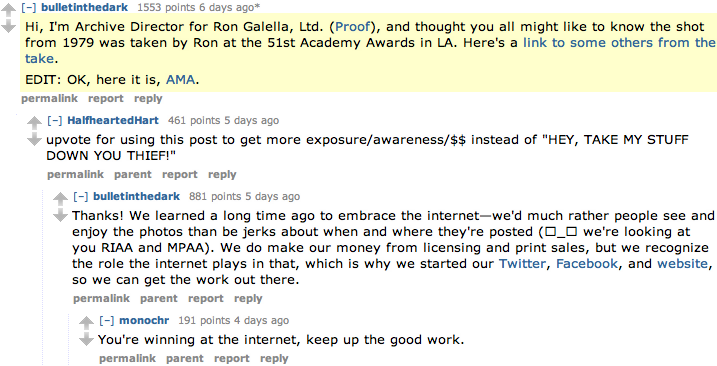 As you can see, this prompted an AMA, which is interesting in itself, featuring lots of conversation about how the internet has changed the paparazzi business and the differences between modern paparazzi and early ones like Gelella.

I wouldn’t be surprised if all this exposure led to some print sales for the company—though what would be really cool is if they started working on some additional interesting offerings. There is apparently a huge amount of interest in Gelella’s photography and perhaps even more in his anecdotes, not to mention a lot of people who want to jump into the moral debate surrounding the paparazzi. The archivist is clearly skilled at connecting with fans, and I bet they can come up with some great reasons to buy, too.

And also major props to Meryl for not going the plastic surgery route. She looks to be aging a helluva lot better than a lot of other famous women who went for “enhancements” early.

/would still date her
//yeah, and more.

Short term, they are on the right track, long term they are piddling away the value of their collection by making it effectively public domain. In fact, I would say that you could very likely use their work on your commercial sites without fear, because clearly they are not enforcing their rights.

and to the AC:
it’s not just about the “rights” of the photographer/Archivist company, but also of the natural rights of the people. Treat people fairly and kindly, they’ll be more willing to support you. DUH

Yeah, yelling at people to take down your stuff is truly a winning strategy at securing your future.

Yes, why don’t you try that.

By ?long term? do you mean ?by the time the copyright expires??

No, long term as in a few years. If the images are used over and over, presented online, and used as defacto public domain material, why would anyone want to license it? For that matter, why would anyone pay a license fee to a company that doesn’t seem concerned about non-licensed use of their material?

Why would anyone want to look at the Mona Lisa when it’s been used over and over, presented online, and used as de facto public domain material?

But think of the extra money that could have been made if only people could have been barred from seeing what the painting looked like without going to The Louvre and Da Vinci’s heirs still got to control it! It’s almost worthless now due to the public domain!

(these people actually believe that…)

Paul, as always, you are a git.

Do you think the value in the Da Vinci painting is only in the viewing? Do you not think that much of it’s value is derived by it being (a) entirely exclusive, one of a kind, and (b) the artist is long dead and won’t make any more?

You manage to be an idiot in every thread you enter now. Take the boots out of your mouth and think for a while before your next post.

b) Dead? Haven’t you heard; being dead and unable to make works isn’t a problem. If you can’t monetise your works when you’re dead, it’s because you’re a loser, a nobody and an idiot. Why do you think copyright lasts for lifetime + 70 years?

Love it – when you have no point, resort immediately to name calling.

“Do you think the value in the Da Vinci painting is only in the viewing?”

No, if you think i was saying that, you still need to take those reading comprehension classes. Its value is also in the reproductions, the transformative works created and other references created and the overall value created by the image’s availability in the public domain. You know, the things that IP maximalists would love to block.

“Do you not think that much of it’s value is derived by it being (a) entirely exclusive, one of a kind”

“and (b) the artist is long dead and won’t make any more?”

If you’d like to stop the idiotic attacks, I’ll explain why, but I’m going to guess that if I did so here, you’d just attack me again. What’s the point?

“You manage to be an idiot in every thread you enter now. Take the boots out of your mouth and think for a while before your next post.”

Would you like to actually address my points, for once? Or do you just want to attack me while adding nothing to the conversation? I’m not going anywhere. If you don’t like my comments, go away or use the report button you so despise. Otherwise, STFU.

Because obviously posting an image on Reddit and licensing an image for a commercial venture are exactly the same thing.

Also, you have no idea what “de facto” means.

(1) They might be drawing a line between Reddit and large-scale commercial uses. Refusing to enforce the copyright on Reddit doesn’t bar them from enforcing it elsewhere.

(2) The effect of taking down this photo on Reddit would, in all likelihood, result in zero increased sales. So why bother? Leaving it up gives you goodwill which leads to more revenue from …

(4) And this is assuming that Ron Galella’s intent here is to maximize profits off of his copyright. Galella is old and famous, as far as paparazzi go at least. He’s probably more interested in staying relevant than in maximizing the value of his estate.

“The effect of taking down this photo on Reddit would, in all likelihood, result in zero increased sales. So why bother? “

The question isn’t INCREASED sales, rather it’s a question of what people will pay to license what is effectively now a public domain work.

“The question isn’t INCREASED sales, rather it’s a question of what people will pay to license what is effectively now a public domain work.”

Unless you’re the kind of idiot that thinks that something being available online means zero sales, people will pay the asking price if they wish to licence them. In other words, nothing has changed. People pay for stuff that’s available for free (legally or illegally) all the time, for a variety of reasons that should have be clear by now. Doubly so here, if the images are to be reused for commercial reasons rather than sharing/fair use reasons.

If they don’t, and they instead try to make a profit from an unlicensed work, there are many legal and other channels available to fight this. Unless you’re the kind of idiot that thinks that non-profit usage is the same as for-profit business use, and also believes that this was the first time this image has been seen online, nothing has changed.

The only things that have changed are the levels of interest in the photo and the goodwill toward the photographer (and his director) generated by their appearances on Reddit, either of which potential customers may not even have known existed before the Reddit article. You can argue that sales may not have been gained by this piece, but they’ve not been lost either.

Any of Andrew’s other points you want to fail at attacking, or are you just cherry picking the one you want while ignoring the rest, as usual?

… given the usual negative consequences of short-term focused business decisions on everything but the owner’s pocket, i don’t think anyone’s going to object to a rare example of a positive outcome.

Yeah, let’s see what happens when you use their images for commercial purposes rather than in a public forum as a subject of discussion.

Though on the other-hand these guys are lucky as they have made enough money and are happy in their lives to be comfortable with this.

I can understand why a struggling and/or lesser known artist might freak out. Then there are others who just want to share. Another extreme is the RIAA/MPAA, global financial machines that make money by restricting access to culture and art while simultaneously trying to take as much from the content creators as possible.

Long term they are pissing away a chance at picking up dollars for a few pennies now and all in a pathetic attempt to CwF + RtB.

Or better said, all in an attempt to buddy up to a bunch of thieving freeloaders who never had any intent to dish out a few pennies to begin with (nor will they now that they have been effectively given the okay to pirate the photographs as they please with no repercussions).

I may be missing something but from the reddit ama it seems people are interested in the experience/story of the photos not so much the photos themselves. The photos would seem to be the draw to get ppl in the store.

Considering they have an archivist with his eye on the internet enough to catch a reddit thread while there is still active conversation going on I have a feeling they would have a different reaction if they spotted someone actively trying to profit of their content. The fact that they dont try to stifle discussions like these means absolutely nothing about how they would handle enforcing their rights in the case of commercial sites.

Isn’t that the purpose of an Archivist? To archive information so the world can continue to make use of it. Especially photographs which become historic in nature. Aren’t Archivist’s kind of like Librarians?

Isn’t this covered under ‘Fair Use’ anyway?

He gets props for specifically calling out the RIAA and MPAA.