Prenda's Latest Trick: Pretend There Are NO Defendants So No One Can Object
DailyDirt: Going To Space

Dish Turns CBS' Actions Against It; Touts Its Revoked 'Best In Show' Status With A Damning Footnote

Dish Network's Hopper DVR has certainly made more than a few broadcasters uncomfortable. One of them, CBS, decided last week that it would rather drag its own brand through the mud (CNET) and lose a reporter than give its current lawsuit target a bit of favorable press. CNET named the Hopper “Best in Show” at CES, only to have CBS unceremoniously strip Dish's DVR of the title, a decision CBS likely now regrets.

The Consumerist reports that Dish is taking a well-deserved swing at CBS, this time on its own website where its touts the Hopper being named Best in Show, along with a very noticeable asterisk. 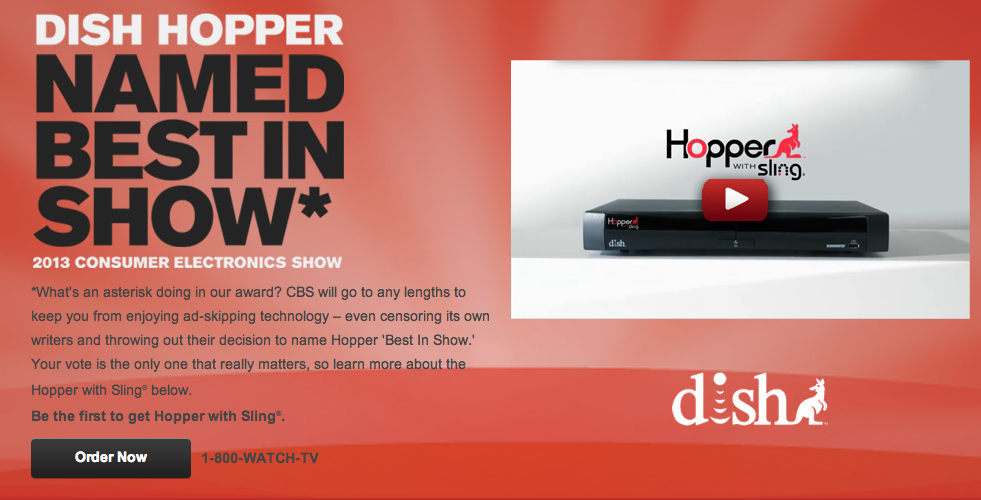 The wording after the asterisk reads:

*What’s an asterisk doing in our award? CBS will go to any lengths to keep you from enjoying ad-skipping technology – even censoring its own writers and throwing out their decision to name Hopper ‘Best In Show.’ Your vote is the only one that really matters. 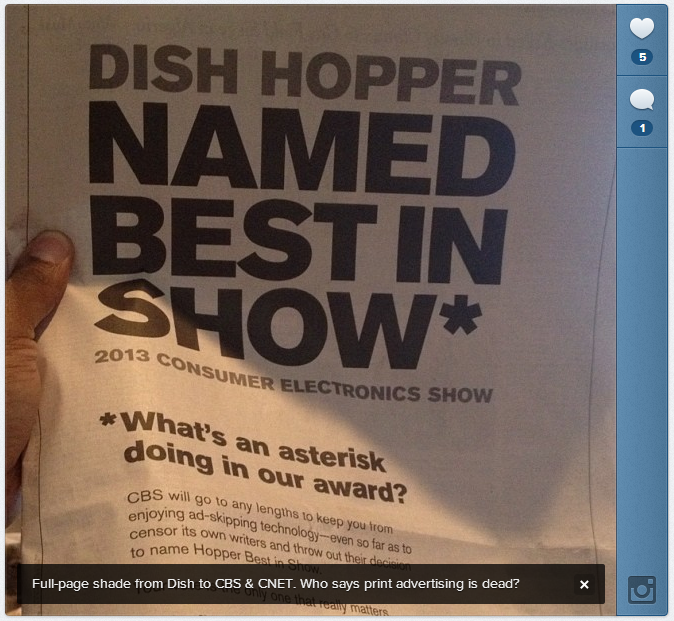 So, what did CBS gain from freezing its legal foe out of an award? Absolutely nothing.

The broadcaster was reportedly worried that having one of its subsidiaries give an award to a Hopper DVR would possibly hurt its case in court. However, now that it’s been revealed that the device did indeed win the award — even if will never receive the actual accolade — it has only turned into a public relations boost to Dish and the Hopper.

If people weren't already aware of the product, they certainly are now. And for many of those, technology that time-shifts AND skips ads is right up their alley. In addition, more people are publicly aware of the legal battle, which seems to boil down to the networks' insistence that customers watch every ad. Bad news all around, and CBS needs look no further than the still-smoking gun in its hand to explain all the brand-new holes in its foot.

Comments on “Dish Turns CBS' Actions Against It; Touts Its Revoked 'Best In Show' Status With A Damning Footnote”

I laughed as I read this.

I can just imagine CBS holding a gun and looking at its feet and wondering why it hurts so much.

Great comment. Somehow, there’s a reason for or against gun control — I just can’t figure which way…

There is a lot to be said for gun control, then they would have hit the target instead of their foot.

Would that be a MO-O-O-NSTER KILL on Target?

Really? Because with the way they try to dance so gracelessly around the issues involved, I’d say they have two left feet. 😉

A committee is the only known organism with 100 stomachs and no brains.

I can just imagine CBS holding a gun and looking at its feet and wondering why it hurts so much.

And then going on about how it’s their patriotic duty to blow itself in the foot as many times as possible, and implore the courts and congress to craft legislation to enable them to continue to do this.

They could practically walk on water. Not so much now, though.

“They could practically walk on water. Not so much now, though.”

Not surprising with all the holes in their feet.

There is this thing called a remote. It has this other thing called a mute button, I use it on every commercial, as do many other people. There is no difference.

keep telling yourself that.

You should upgrade. My remote has not only a mute button but a fast forward button. Fantastic for skipping commercials. I’ve had it for a decade (the remote) but upgraded the device (TiVo) during that time.

An even better upgrade is to Netflix, which makes the TiVo obsolete. My remote still has a mute and fast forward button, but there are no commercials to skip. I am finding quite a few TV shows from a few years ago that I didn’t watch for any number of reasons. They are very entertaining. The on-demand nature is even more convenient than TiVo.

Cable TV is obsolete and the providers of it seemingly realize this. They offer you cheaper DVRs than TiVo, which improves your experience, skips commercials, and lets you watch when you want. So why not go the whole way and make everything on demand all the time? Cheaper than all these DVRs would be to simply have one recording at the head end. Each cable system could become a miniature “netflix”.

But then the content producers would have a hissy fit. “We can’t allow consumers to have too convenient of an experience”, they would say. Customer satisfaction goes against our most basic principles. The cable tv providers would then speak up in agreement. Yes, we augment the negative experience contractually required by the content providers, but going beyond the contract requirements and offering lousy customer service, high prices, and unrelated bandwidth caps on internet usage.

Infrequently, there is a need to call it what it is, and CBS is a company that sells ads.

Sometimes, after selling ads, there is money left over to produce a show that people will watch.

But because I haven’t seen anything worth watching on CBS since “Dr. Quinn Medicine Woman”, starring Dr. Michaela “Mike”, I’m guessing that CBS is still struggling from low ratings.

I don’t care how it’s marketed, but the product works pretty well, and it’s good to see it win an award. unlike CBS’s primetime lineup. Their last primetime emmy award was in 1974 if I remember correctly.

Their last primetime emmy award was in 1974 if I remember correctly.

If you are talking about the “big” show awards (drama/comedy series) you’re only off by 21 years (2005, Everybody Loves Raymond).

And, they’ve literally locked up the “reality-competition show” award with The Amazing Race winning for the past 8 years…every year that the award has been given.

Nobody loves raymond. Especially not me. The votes were stacked.

Jon Lovitz is a better actor than anyone on The Amazing Race He played a great Hanukkah Harry at NBC’s Saturday Night Live.

Jon Lovitz is a good voice actor too. I liekd his role as Jay Sherman in The Critic.

I’ve never even heard of it. And I have one of the top tier cable packages.

Oh, I see. It’s another inexpensively produced mindless “sitcom” that doesn’t increase your knowledge or understanding of the world.

Oh, I remember now, back to the ’70’s when everyone was getting sick of network TV, just as cable was coming on the scene. Least objectionable programming. Something that nobody actually likes, but is just good enough that you won’t turn the channel. It doesn’t appeal to anyone, but it might keep you from changing channels between ads.

Almost right Top Chef won the 2010 Emmy in that category but the Amazing Race has won every other time that award was given. Seven straight and two since wins.

Craig Furguson is worth watching.

We’re really hurt and endangered by all the imaginary crimes committed against us and all the pretend laws we tell ourselves must be being broken.

Don’t talk about the Dish Hopper. Furthermore, anyone who says they are going to Target to buy a dish hopper for their kitchen will be sued for encouraging copyright affringement.

Maybe it is short for “affinity” and “infringement”.

Affringement. The liking of copyright infringement?

I think it is the superset of crimes (encoded in lawbooks or not) that CBS and other content industry folks believe we all commit, of which infringement is a part. Affringement includes not watching commercials, not buying advertiser’s products, submitting negative reviews of anything in their line-up, coughing on Les Moonves, and so on.

Funny since CBS owns C-Net and Download.com which was and remains the main conduit for file sharing sites such as Kazaa, Limewire, Morphius, Grokster, and even Napster.

“…and CBS needs look no further than the still-smoking gun in its hand to explain all the brand-new holes in its foot.”

I love that line.

Prenda's Latest Trick: Pretend There Are NO Defendants So No One Can Object
DailyDirt: Going To Space
Follow Techdirt