Unfortunately, members of Congress have been lied to directly about the extent of the collections occurring under Section 215 (and 702), so that’s one strike against the “oversight.” Now, it appears that members of Congress are being selectively provided with information about the programs. 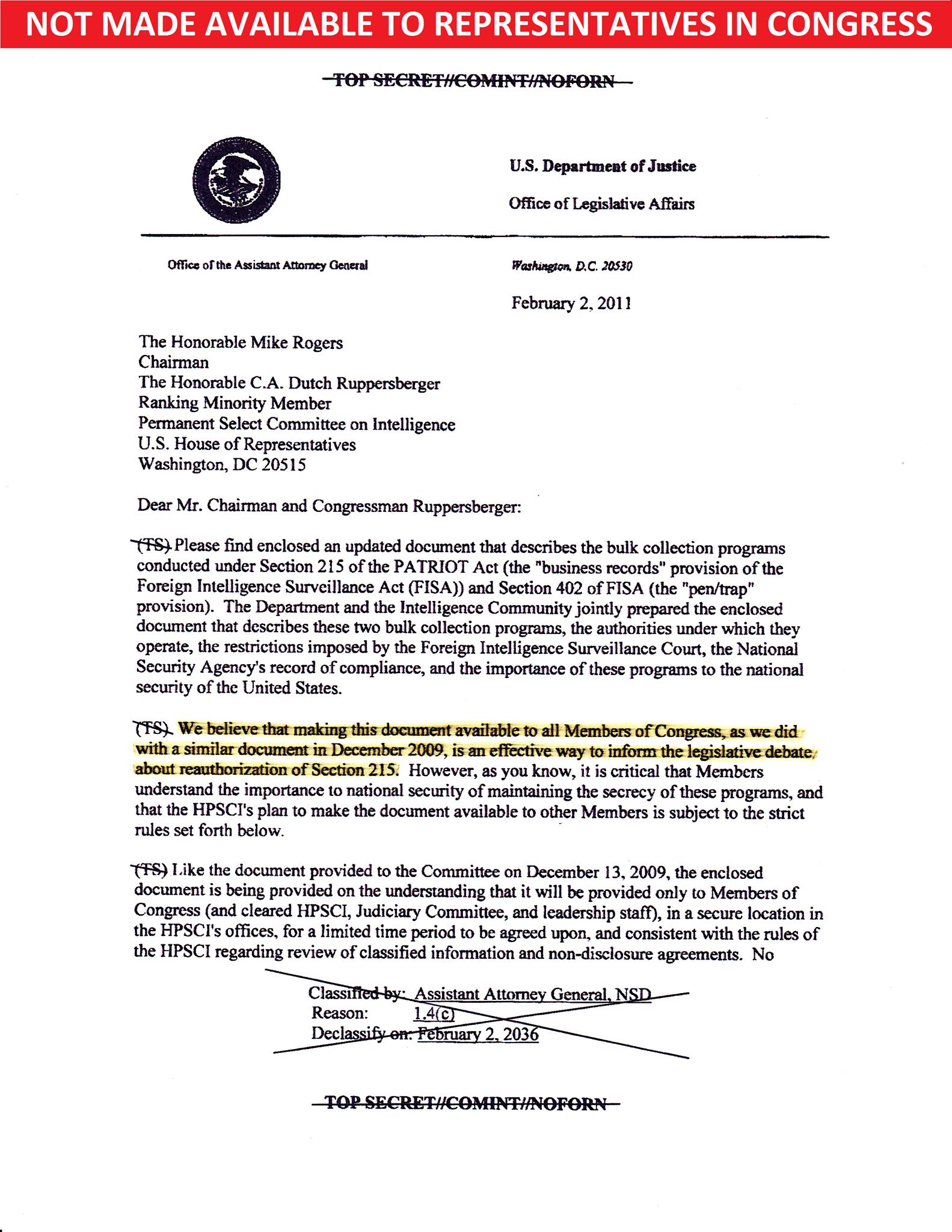 At the beginning of the second paragraph, the cover letter (dated Feb. 2, 2011) notes:

We believe that making this document available to all Members of Congress, as we did with a similar document in 2009, is an effective way to inform the legislative debate about the reauthorization of Section 215.

There’s your “oversight” for you: the assistant attorney general calling for these documents to be shared with all Congress members in order to give them the oversight capabilities NSA spokesmen keep claiming is keeping the agency in check. Except, as Amash points out on his FB page, Mike Rogers and Dutch Ruppersberger never bothered sharing these documents.

Less than two weeks ago, the Obama administration released previously classified documents regarding ‪#‎NSA‬’s bulk collection programs and indicated that two of these documents had been made available to all Members of Congress prior to the vote on reauthorization of the Patriot Act. I can now confirm that the House Permanent Select Committee on Intelligence did NOT, in fact, make the 2011 document available to Representatives in Congress, meaning that the large class of Representatives elected in 2010 did not receive either of the now declassified documents detailing these programs.

It appears the Committee was extremely selective (hence its name?) about who it would share these documents with. Incoming Congress members need not apply.

So, when Feinstein and others greeted the leaks with a shrug and a blase “We’ve known about this for years,” there was probably some truth to those claims. Certain Representatives and Senators knew. Some even tried to warn the public. Still others had no idea, not until the details began appearing, not in security briefings, but at The Guardian and Washington Post.

Maybe the NSA really thought every representative was on the same page. Maybe it knew there were “gaps” in the oversight but didn’t care. Considering its position as the most secretive of intelligence agencies, it probably figured the smaller the loop, the better.

According to this document, it was left in the hands of Mike Rogers and Dutch Ruppersberger to disperse the information to the other members of Congress. And it appears they chose not to.

“Oversight” like this, based on selective inclusion, is a joke — something that affects all Americans is guided into the hands of a chosen few, most of whom wholeheartedly support the NSA’s programs. Mike Rogers continues to mold the “oversight” into his own image, withholding these documents in 2011 and, more recently, denying crucial information on the FISA court and the PRISM program to representatives who wished to use it to get up to speed before the vote on Amash’s NSA-directed amendment.

This isn’t “oversight.” This is Mike Rogers abusing his position to control the narrative and keep the NSA running smoothly, safely hidden away from those tasked with overseeing these surveillance programs. The NSA and its defenders can talk all they want about “oversight,” but this is nothing more than Rogers carving out a fiefdom at the expense of the American public.

He wants to be Osama’s, pardon me, Obama’s best right hand man.

These Osama comments are idiocy. Obama can create his own problems just by his actions.

Now, on a more serious note: Rogers deliberately lies and upholds information from the Congress. I shall await his punishment.

Well, at least you’re all getting a little sun…

Just diffuses attention. Besides, we already know the problems! It’s ALL due to a totally corrupt ruling class that fully intends to enslave everyone else. NSA is just ONE of their instruments toward that goal.

Just save time and fretting: mark Congress off your list of agents of change, because matters are now way past that stage, they’ve ALL proven either corrupt or ineffective.

It’s time for Populism, another New Deal to again level the playing field against The Rich who own the corporations which own the gov’ts.

No person can make an informed decision without ALL the info.

He should be sanctioned and removed from the “House Permanent Select Committee on Intelligence”.

Don’t trust him.
No trust, at all.

Why doesn’t everyone just understand that the second part of the sentence is automatically inferred?

“Everybody is equal, but some are more equal than others”

They have a secret interpretation of what the word “all” means.

I don’t believe in conspiracy theories, but I am beginning to wonder just exactly what the NSAzies (or the unseen handlers) have on these various gov’t members.. including the president. With enough info, you can blackmail the entire ‘ruling class’

Viewing this on my phone, I thought it said “NOPORN”

Problem is that more than 99 percent of our population consists of lemmings. These lemmings could be reached by music though. Maybe it would be easiest to take old popular breeder music and replace the lyrics with catchy thought provoking music. Make the loser/idiot/dweeb into the guy that votes Democratic or Republican. Make the narratives ridicule current political shenanigans.

As strange as your comment reads, I have to agree.

Just when do “We The People” start to see these “LIARS” brought to JUSTICE? Where are the CRIMINAL CHARGES?? When do heads start rolling???

Didn’t you read the news. They are chasing down Snowden as quickly as they can to shut him up. As soon as they can get their hands on him they will try him and lock him up. Who else could you be talking about.

The only way that will happen is through vigilante justice. Seeing how Homeland Security has been heavily militarizing the police, how the NSA & FBI are intercepting all communications, and how coordinated our government is in punishing any dissent, well that will fail like a whale trying to fly.

Against the rules…in a House led by a Representative who was admonished for handing out lobbyist checks on the floor of the House during session?

It was “made available”… in a drawer of a locked filing cabinet in a disused lavatory with a “beware of leopard” sign on the door.. “made available” doesn’t mean “handed out”.

making the information available, as it states in the letter above, doesn’t mean and obviously didn’t mean that it was going to be discussed or any notice was going to be taken of anyone or the decisions made by Congress anyway. this is nothing but absolute horse shit! and the biggest dropper of it is Rogers. what a liar he is!!

The “oversight” in “Oversight Committee” refers to the fact that the intelligence community feels that giving Congress any influence over them was an oversight.