Once Again, Motorola Gets Slapped Around Over Attempt To License Standards Patents At High Rates To Microsoft
Twitter Diplomacy? New Iranian Officials Use Twitter To Make Surprising Moves To Cool Tensions Over Israel And Nukes

Are Video Game Companies Next In Line For Copyright Termination Battles?

We’ve seen the beginnings of a battle at major labels as artists are filing to reclaim the copyright to their recorded works. The magical 35-year mark triggered by Section 203 of the US Copyright Act arrived in 2013 for works created in 1978. Each passing year will bring with it another batch of recordings that artists can reclaim from their current and former labels.

The labels aren’t too happy with this arrangement (although they seem to be generally chill with the rest of copyright law as it stands) and have made a lot of noise about artists’ works being nothing more than works-for-hire, something not eligible for copyright termination.

Dan Rogers at Gamasutra points out that the next few years might see the same sort of defensive activity from video game companies as the termination date rolls up on some old classics. Here’s an illustrated list Rogers created showing some of titles due for termination within the next five years. 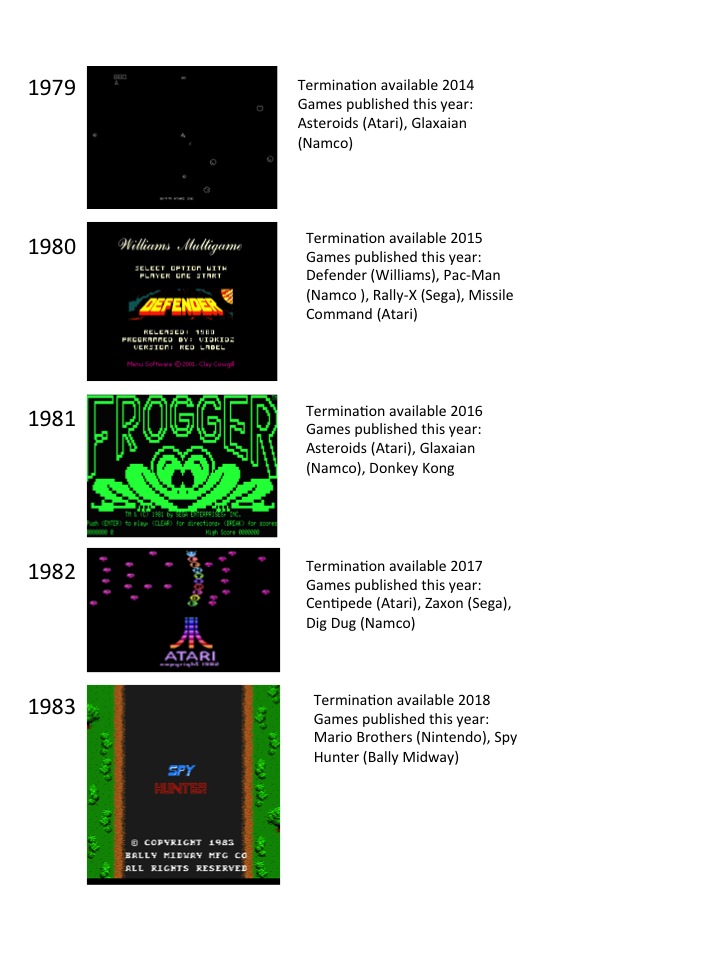 Rogers also points out that this battle may be short-lived and involve very few combatants, at least much fewer than the recording industry is facing.

This isn’t to suggest that the rights to these specific games can be terminated, and my guess is that many were created by in-house teams—thus work created by employees within the scope of their employment. But other games created during these years were no doubt created by outside, independent developers, and these rights could very well be subject to Section 203.

It’s probably a safe bet that most games created for large companies like Nintendo and Atari were work-for-hire, if for no other reason than these games were created by teams of developers, rather than resulting from the effort of two or three individuals. Not only that, but developers working for game companies are usually referred to as “employees.” Artists recording for labels aren’t usually considered to be part of the staff. Even thirty-plus years down the road, it’s next to impossible for a set of developers to jump ship and retain their IP.

And if developers aren’t locked out by contracts specifying their efforts are “works-for-hire,” the expansive definition of non-specific exclusions will likely exclude several more game creators.

(1) a work prepared by an employee within the scope of his or her employment; or

(2) a work specially ordered or commissioned for use as a contribution to a collective work, as a part of a motion picture or other audiovisual work, as a translation, as a supplementary work, as a compilation, as an instructional text, as a test, as answer material for a test, or as an atlas, if the parties expressly agree in a written instrument signed by them that the work shall be considered a work made for hire. For the purpose of the foregoing sentence, a “supplementary work” is a work prepared for publication as a secondary adjunct to a work by another author for the purpose of introducing, concluding, illustrating, explaining, revising, commenting upon, or assisting in the use of the other work, such as forewords, afterwords, pictorial illustrations, maps, charts, tables, editorial notes, musical arrangements, answer material for tests, bibliographies, appendixes, and indexes, and an “instructional text” is a literary, pictorial, or graphic work prepared for publication and with the purpose of use in systematic instructional activities.

Still, there could be few outliers with valid claims for copyright termination, and if there’s enough of those, things could get interesting. Chances are that most of these creations are locked up eternally, which works out well for game companies if not so much for the original developers. Unlike other media forms, video game IP can be almost endlessly exploitable, what with new platforms being developed constantly and the easily-triggered nostalgia of lifelong gamers. Companies aren’t done milking various 20+ year-old titles to death so they’d likely be unwilling to cough up what’s left of the cash cow without a fight.

[Speaking of all of the above (large game companies, development teams, nostalgia), if you’ve got some time to kill, this collection of 10 years of Atari’s internal VAXmail is extremely fascinating, detailing internal bickering and development twists and turns, along with some postmortems of new IP ‘field trials’ at local California arcades.]

Comments on “Are Video Game Companies Next In Line For Copyright Termination Battles?”

It’s probably a safe bet that most games created for large companies like Nintendo and Atari were work-for-hire, if for no other reason than these games were created by teams of developers, rather than resulting from the effort of two or three individuals.

Except that, you know, many were created by only a few people who did keep rights or received them through reversion clauses in their contracts with big companies like Atari and Namco and, er… Bally/Midway. Like Jamie Fenton. But why let facts get in the way of some good ol’ supposition?

Almost all early arcade and cartridge games were created by a single person or at most, 2 people working together.

For instance, Eugene Jarvis created Defender while working for Williams. Then, later, he and Larry DeMar (as Vid Kidz) made Robotron and Stargate which were released by Williams. There is a very good possibility that they could reclaim these two games, as they created them and then sold them to Williams.

While i agree with the above comment i know a few programmers who designed games in-studio and who certaintly have no chance of using those same ideas to further a series, even if its an offshoot.

But i believe as we can see from the latest “in the spirit ” of megaman kickstarter that it doeant matter as much with software. (Yes im aware that that commwnt is the beginning of a slippery slope but in this very narrow instance i believe it is ok)

According to that picture Asteroids was released in ’79 and ’81. huh?

So, can someone enlighten me? What is the copyright term of a “work for hire” like a dev team? Is it “life of last surviving member of the team + 70” or “Life of the owning company + 70” or something else?

Logic and fairness would suggest that since the specific dev team is usually disbanded on completion, it would be “release date +70”. However, that would limit the copyright term to something within a human-spaceflight-distance-worth of sensible, not to mention it being shorter than a copyright held by an actual creator, so I know it’s not that…

From a laymans point of view (in this case the programmers ). Dont bother you cant touch it, make a “spirit of” unless you want your arse sued into tje ground.

If it is a work for hire, the copyright belongs to the corporate “author” and would thus expire 95 years after publication or 120 years after creation whichever comes first (for works created on or after Jan 1 1978).

So… it turns out works for hire;
1/ Give absolutely no rights to the people that actually create the work in question
2/ Last pretty much as long as individual copyrights
3/ Still last longer than anyone who cared about the work in the first place is likely to be alive.
Yeah, my “faith” in copyright law has been restored. Thanks for the (depressing) info..

Copyright for work for hire is, I believe, 95 years from the date of publication. I didn’t go look it up again, but that’s what I remember.

Update: yes, it is 95 years from publication for corporate works (work for hire). Unpublished work for hire is copyrighted for 120 years.

None of those companies would have even thought about making a video game if they couldn’t control the rights for the next 95 years. Copyright is screwed up.

Logic and fairness would suggest 14 years… But anyway…

Logic and fairness would suggest 14 years… But anyway…

Yeah I meant under the current law. I know that applying the phrase “logical and fair” anywhere near that is stretching the definition to breaking point but still…

For works created after 1978, 95 years from first publication or 120 years from creation, whichever expires first, if the work is a work made for hire.

You may want to browse through the Digital Antiquarian blog. A surprising number of classic computer games published by now famous brand names were in fact the creation of one passionate developer or at most two, whom the publisher invited, begged or bribed to come aboard. And they can easily prove it too — it’s all fairly well documented.

Ah, the “everyday good” of copyright in action. OOTB dismisses this as yet another anomaly in 3…2…1…

It’s kinda funny since most people, at least from my experience, don’t have a problem freely pirating games older than ~15 years even those that don’t pirate games normally. And that’s if the developers haven’t already released their old content for free or next to nothing anyway.

Which is exactly why copyright should still be 15 years. Then record companies would have to compete with the Beach Boys and the Beatles and the Rolling Stones instead of just re-selling it for eternity.

And new music, by definition, would actually have to be good instead of One Direction.

Assuming that the record companies couldn’t just reclaim the rights as soon as they expire, right? No one should be able to claim it at that point. It should stay in public domain forever once it expires.

Indeed, because we the customers still have a voice and we think it’s silly for a company to hold onto a game for that long, especially when everyone starts forgetting about it.

There’s no point in fighting over these rights, NO ONE wants to pay for a 35 year old game. The only way there’s any possible value to them is to sell PC versions over the Internet that run on an emulator, but no one does this.

Plus, a lot of those old classic games are so old that there’s like a million free versions of them online. I mean seriously, any programmers ever make a mine sweeper game when learning a programming language? I have.

Copyright on games should end after 5 years, or 10 at most, because at that point the game system/computer it was built for is no longer in use.

Copyright on EVERYTHING should end after 5 or 10 years.

Even many owners themselves seem to have no problem releasing/forgetting about their old games and therefore stop caring about them. After 5 or 10 years, in less the game requires a subscription to play it’ll be making little or no money anymore.

If you want to be even more fair, no one should be able to claim the rights to that game again after the time expires so that it can permanently stay in public domain. But there may have to be an exception for subscription based games, especially WoW which is still doing really good.

But I guess some companies are just that greedy and think their games will still be making money after 35 or more years, and just because they complained, that’s what the rule is.

The game is Galaxian, not Glaxiain.

Yeh just sounds like a legal headache getting into copy right legalities. Don’t have the cash to be fighting of corporations anyway. Just buy them, play them and let others worry about the technical side of things is my plan. http://www.donkeykongcountrytropicalfreeze.com/blog/ release keeps getting put back and back now saying 2014?

Once Again, Motorola Gets Slapped Around Over Attempt To License Standards Patents At High Rates To Microsoft
Twitter Diplomacy? New Iranian Officials Use Twitter To Make Surprising Moves To Cool Tensions Over Israel And Nukes
Follow Techdirt