FBI Stops Responding To The Most Prolific FOIA Filer, Because He Might Actually Learn Something
Supreme Court Refuses To Hear Case About NSA Surveillance That Attempted To Jump The Line

Over the five seasons that the show Breaking Bad ran, it became increasingly common for people to joke about how it was really a very differently toned sequel to the comedy Malcolm in the Middle, which also starred Bryan Cranston. At times Cranston and the creators of the Breaking Bad had even cracked a few jokes about the supposed “coincidences” between the two very, very different shows. However, over the weekend a video clip was released showing a potential “alternate ending” to Breaking Bad, in which Cranston’s wakes up in bed with his wife from Malcolm and admits that Breaking Bad was all just a dream. It’s an amusing little clip that the Breaking Bad crew included on the DVD release of the series. And the video got everyone talking about it.

So, of course, Sony Pictures had to issue a takedown on the YouTube clip. Because, apparently, no one is allowed to have any fun until they pay Sony. 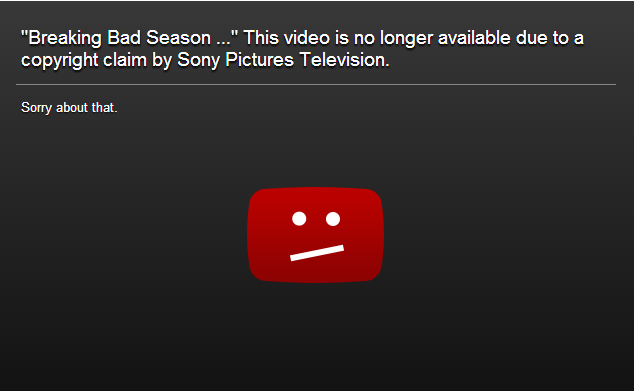 Spoiler alert: this doesn’t make anyone more interested in buying the DVD. It just pisses people off.

but then Sony can go crying yet again to politicians saying how no one is buying their media! it must be due to ‘piracy’, so get new laws enacted, ramp up old ones, get more people put into prison and made bankrupt! then they’ll buy our stuff instead! talk about thick as shit! i could never understand how anyone with the mentality below that of a moron (nothing bad intended to those people) can become the head of a multi-billion dollar company and still not understand the customers they rely on totally for existence!

To rise in politics and company management you have to be like the emperors of old, everybody pays tribute or you beat them up.

It really is impressively dumb. It did NOTHING but keep both shows which are already off the air and trying to sell dvd/blu rays in the public consciousness and show a bit of a sense of humor.

Maybe I’m giving them too much credit, but any chance they could be trying to take advantage of the Streisand Effect and get more people to see it? Yea, I know, probably not.

Buzzfeed grabbed it an republished it after the takedown.

Buzzfeed grabbed it an republished it after the takedown.

No, it’s still there.

It wasn’t available when I tried to view it on the 18th and it’s not there now.

I watched this over the weekend, absolutely loved it. “I’m the one who’s knocking.” 🙂

[Leans over to coworker]”Hey, do you have the Breaking Bad series converted?” Coworker: “Yes. Do you want it?” Me: “OK.” [Never watches it, doesnt care]

It’s absolutely fascinating that you don’t watch Breaking Bad and that you don’t care. Please tell me of other shows in which you have no interest, because it’s really very interesting, this non-interest of yours. And as I presume you suspected, it really makes you seem likejust about the coolest person ever.

How unoriginal … I hope Sony TV owns the rights to Newhart or someone might decide that Sony using their idea is infringing.

To be fair, I did see the alternate ending, it was pretty funny.

It was nice to have the two MitM actors reprise their roles just for those few minutes.

I’m glad I’m not the only one here who remembers that.

{Sometimes, I feel old here – here being the Internet}

Still was funny though.

I remember it! In fact, I was recently interested in watching the series again, so I could experience the whole buildup to the finale. Unfortunately, it’s not available on Netflix, so me no get to watch.

Good job. We’d hate for there to be something out in the public consciousness that might make people want to watch our show. Send out the lawyers, make it so the show appears to never have existed.

With your name, I’m pretty sure that should have been, “Good job, bitch!”

Appropriate time for previously written tagline:
The world is being dumbed-down in ways most people are already too stupid to grasp.

The world is being dumbed-down in ways most people are already too stupid to grasp.

Are you the leader of this movement?

he is this movement

out_of_the_blue just loathes it when due process is enforced.

LOL That was awesome I love Breaking Bad wtf Sony?

It’s interesting how YouTube hides the original title so that people looking for that video cannot find it easily by the title.

Using the above search term in Google, guess what I found? http://www.youtube.com/watch?v=GtYNX3JWzjc

FBI Stops Responding To The Most Prolific FOIA Filer, Because He Might Actually Learn Something
Supreme Court Refuses To Hear Case About NSA Surveillance That Attempted To Jump The Line
Follow Techdirt