from the hypocrites dept

For many years, we’ve written about the Business Software Alliance’s (BSA) ridiculous snitch program. This is where the organization (which represents a bunch of software companies, but more or less takes its orders from Microsoft, Adobe, Apple and Autodesk) promises to give people large cash rewards for snitching on friends and colleagues who happen to be using unlicensed software. The BSA insists that this is one of their best tools — which they then use to raid small companies for questionable “audits” that often completely destroy those businesses. The BSA forces those companies to pay huge sums of money — all of which the BSA keeps. As for the claims of big rewards for snitches, the BSA is incredibly misleading on that front. A few years back, they started promising “up to $1 million” for snitching. In exchange, we promised “up to $1 million” if anyone could show the BSA actually paying out $1 million. Someone looking into the BSA’s payments found that the highest they’d paid out to snitches at the time was around $5,000 with many getting less than that. In other words, the BSA has never had much of a reputation for intellectual honesty.

The good folks over at TorrentFreak have now also found that the BSA also appears to be a bunch of hypocrites as well. Having launched a new “snitch” campaign on St. Patrick’s day, it appears that the organization failed to license the photo of the “pot of gold” it used on Facebook. Yes, that’s right, on the very campaign where the BSA is asking people to snitch on unlicensed software, it appears to have used an unlicensed photo. The image appears to have come from CakeCentral. 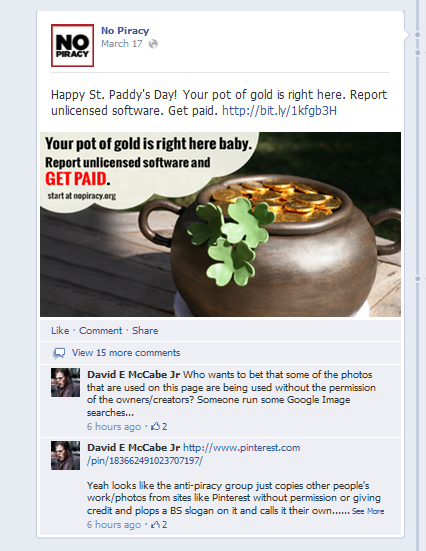 When Torrentfreak reached out to the BSA about the licensing of the photo, suddenly the image disappeared from the BSA’s Facebook page replaced by an image of an obviously fake pile of money. That seems fitting, given that their promises of giving people lots of money is equally bogus. Either way, the BSA is lucky that photographers don’t have an equivalent organization that busts down doors and suddenly demands huge payouts. I’m sure it was just an oversight by the BSA and that some intern or someone failed to get the license. But, the BSA itself never forgives such minor “oversights” by the small businesses it destroys with its snitch campaign.

Not happy with stealing from hard working developers they are now stealing from innocent leprechauns! Good lord BSA have you no shame?

“Not happy with stealing from hard working developers they are now stealing from innocent leprechauns! Good lord BSA have you no shame?”

BSA members have been caught infringing open-source licenses many times. It seems that they have a kind of one-way view of infringement: “OK for us, not for you”. Unfortunately, the government appears to agree with them. While government agents have gone with the BSA on many “raids”, never have they raided the BSA.

The BSA should be nailed to a cross for this and sued bankrupt. If it were the other way around you know they would do the same even if it was just an accident.

It is only wrong when you little people do it.

I have. Every time I get my hands on another router, firewall, or host, I permanently blacklist their network — for the same reasons I blacklist spammers, phishers, scammers and the other filth of the Internet.

There is absolutely no reason for anyone to extend the privilege of network services to the BSA (unless they have a contractual agreement with you for same). You’re not obligated to allow them access to your web servers, your mail servers, or anything else that faces the public Internet. So don’t give it to them. Blacklist (or blackhole) and remove them from your view of the Internet.

That this sort of thing happens frequently doesn’t seem to reduce its comedic value. You’d think that organizations so concerned with infringement would be extra careful to avoid engaging in it themselves.

Every time they do, they bring up one of two issues, neither of which make them look good. Either they simply don’t care about infringement when they do it, or accidental infringement is so easy that even they can’t avoid it.

You’d think that organizations so concerned with infringement would be extra careful to avoid engaging in it themselves.

Every time they do, they bring up one of two issues, neither of which make them look good. Either they simply don’t care about infringement when they do it, or accidental infringement is so easy that even they can’t avoid it.

I’d vote for the former. They don’t care about infringement…they care about their legal extortion, and that is about it. The moment Congress comes in and makes what they do illegal, or the moment that some Judge comes along and beats them up, they will be screaming to everyone that listens about the poor software companies they service, whom without them, those companies would have to go directly after their customers instead and how they are really important to world peace and everyone’s livelihood.

The truth is they are hypocrites and legal extortionists who care only about the money they are getting by abusing their customers/former customers with the most obtrusive process they can, especially if the accused has the gall to dump Microsoft and go with a real operating system (i.e. Ernie Ball.)

If this sort of thing happens frequently, then perhaps I have missed articles here regularly talking about yet another infringement such as this by the BSA and its members.

Yes, mistakes happen…though in this case it is not at all apparent what individual made the mistake. Certainly I would not lay such a mistake at the feet of the BSA because to do so would be an attempt to impart to it some sort of culpability for the action of the person who should assume the blame. This would be consistent with the position regularly espoused here decrying secondary liability.

the right thing for them (BSA) to do would be to issue a public apology to the owner of the picture they used, and if it is a professional then they could also offer a token payment for the short time they had used the unlicensed material.
I’m not expecting any of that, but it would be the proper, correct, thing to do especially for a an entity (corporation? agency?) that primarily focuses on proper licensing requirements.

They should offer a token payment regardless. I suggest one percent of statutory damages per copy sent to a Facebook user.

Forget the token payment. Why shouldn’t the BSA just license the photo?

Maybe the BSA is assuming that the owner of the photo would be as ridiculous as the BSA. Does that photo require CAL’s? (Client Access Licenses for each device that accesses the photo?) Or maybe the photo is licensed per server, per cpu, per year?

The BSA might be shocked to find that the owner of the photo might give them quite generous usage rights for a very reasonable fee. Maybe the BSA realizes that it could not withstand such a shock if it were to ask what it would cost to license the photo.

While I agree that’s what /should/ happen in cases of accidental infringement like this, at the same time, it’s Not how they would treat someone doing the same to them, so I say they should either pay to the artist the same penalties they would demand from others, or do as you suggest, and Never Again make insane demands for ridiculous amounts of money when other people and companies likewise accidentally infringe.

“In other words, the BSA has never had much of a reputation for intellectual honesty.”

Of course not. Look who runs it.

I reported them back in october. The post disappeared soon after as well.
Here is my email with the stock company.

Thank you for contacting Dreamstime and for calling this matter to our attention.
The image in question is being used without proper credit line which can make the context a bit confusing. The usage itself – image associated with a message – is allowed and the image seems to have been licensed properly (there is no watermark on the file). However, the credit line is imperative in such cases.

We appreciate you letting us know about this and we will investigate this further.

Comments: I would like to make sure that this image: http://www.dreamstime.com/royalty-free-stock-photos-girl-lollipop-image1610248

Is being used with proper rights on this particular site: https://www.facebook.com/reportsoftwarepiracy

As I see their page being rather dubious.

Thank you for your time.

A more effective way to blacklist the BSA is to only use free/open source software.

Equally true, and I’ve done that for longer than most people have been aware of the term “open source”. It boggles my mind (as it has for many years) that people would actually WANT to use commercial software.

A more effective way to blacklist the BSA is to only use free/open source software.

That may work. However, given that Ernie Ball dumped Microsoft and went with Linux, then suffered a raid that shut down his business for a while, or the other companies that have had BSA show up and complain that their Windows tools wouldn’t run on the Linux Servers, or attempt to destroy systems that were running free/open source software because they weren’t running Windows, you might have further problems blacklisting the BSA.

The better method would be to outlaw the system of legalized extortion that companies like Prenda and the BSA use.

or accidental infringement is so easy that even they can’t avoid it.

Copyright is unnatural. You have to create arbitrary mental barriers against what should be a perfectly natural act. It’s no surprise that they copy, everyone does.

However, given that Ernie Ball dumped Microsoft and went with Linux, then suffered a raid that shut down his business for a while

Uh? Didn’t they dump Microsoft because of the raid? I think you have your ordering of the events confused here.

“[…]” other companies that have had BSA show up and complain that their Windows tools wouldn’t run on the Linux Servers, or attempt to destroy systems that were running free/open source software because they weren’t running Windows […]”

Citation(s), please. Not that I doubt these claims, because they’re perfectly consistent with past BSA behavior, but I’d like to have these references handy for possible future conversations.

But they do have culpability for it. Regardless, I am just pointing out that this is a point of hypocrisy for them. If the positions were reversed, the BSA would not be nearly as forgiving and lenient as you are suggesting we should be.

“This would be consistent with the position regularly espoused here decrying secondary liability.”

Uh? Didn’t they dump Microsoft because of the raid? I think you have your ordering of the events confused here.

Yes, they did. However, I remember a report from around 2010 about them getting raided again. Can’t seem to find it, so maybe it was my imagination, but I seem to remember at the time of reading it, that their CEO complained to the BSA that the whole reason they weren’t running Windows was because of the initial raid. I may just be confused.