We’ve seen silly trademark suits over all kinds of things before. Common phrases come to mind, as do petty politicians going after parodies and the government feeling it necessary to trademark groups of American heroes lest the House of Mouse gobble them up. The point is we see a lot of dumb ’round these parts, but we rarely see that dumb mixed with sexy.

But now, thanks to The Tilted Kilt franchise going after golf club for having some of their staff wearing completely different looking kilts, we apparently can’t say that any longer. The club in question is the Kilted Caddy Club, a golf course that provides female caddies in kilts for some of their golf tournaments, because nothing helps a man concentrate on sinking that twenty-foot sloped birdie putt like a nice pair of legs. The Tilted Kilt franchise, in case you aren’t aware, provides bar/restaurants in which scantily-clad women in kilts and low-cut button-down shirts serve you sub-par food while the worst music you can imagine plays around you and your fellow degenerate friends. In other words, we’re dealing with two quality organizations here. Well, apparently one side of this equation got their kilts in a bunch to the point of filing a very silly trademark claim.

The Tempe, Ariz.-based Tilted Kilt, which has nearly 100 locations nationwide including one at Broadway at the Beach, says in court documents that the caddy club is copying its distinctive and trademarked “uniforms,” thereby, confusing consumers into thinking the two businesses are related. The Tilted Kilt has asked a judge for a permanent injunction against the Kilted Caddy Club’s use of its name and tantalizing tartan uniforms, as well as unspecified monetary damages.

Now, let’s start off with the obvious problem: the two companies aren’t in the same line of business. One is a golf course (that of course has a clubhouse bar and food, but meh), the other is a bar/restaurant. They aren’t competing against one another. That should probably be enough to toss this thing out already. Add to that the fact that the two uniforms aren’t really all that similar beyond incorporating a bastardization of a traditional Scottish kilt, and it’s all the more difficult to see this going anywhere. Judge for yourself. Here are some women in their Tilted Kilt uniforms, making their parents proud: 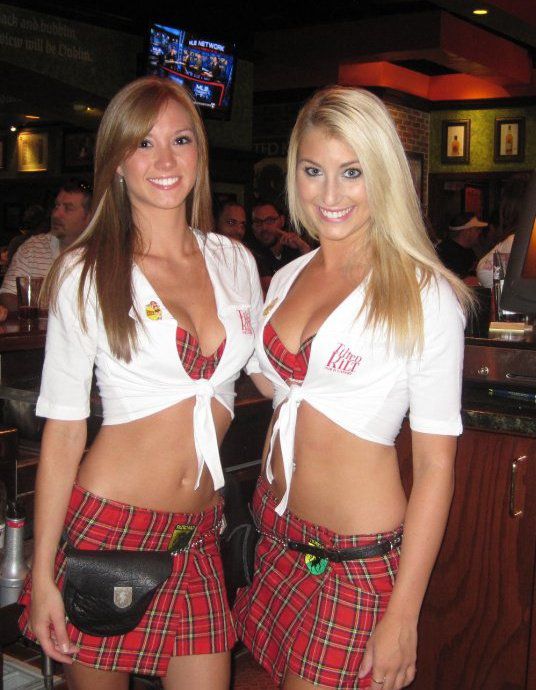 And here are some women from The Kilted Caddy Club. 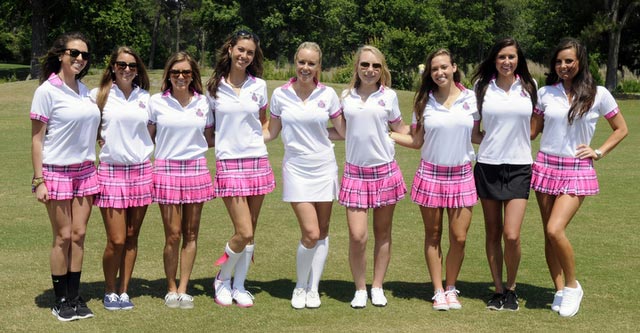 Now, while it is true that the golf course put out some advertisements for events with girls dressed in garb more similar to Tilted Kilt girls, they still aren’t competing against one another and no moron in a hurry is going to think that the restaurant company suddenly went into the golf course business and failed to use their brand name. And besides all of that, the idea of preventing a golf course, a game with Scottish origins, from having a Scottish theme, is sort of silly on its face. Still, because this is a trademark dispute, it must devolve into a silly linguistics lesson from the club’s lawyer, Dan Polley.

“The respective marks do not have any closeness in appearance, sound or meaning,” Polley said. “Coupled with the fact that our client’s services are provided solely at its Scottish theme golf course, the chance for confusion is remote.”

Or how about, rather than having everyone get their MLA handbooks out, maybe two companies not competing against each other just don’t have to find themselves battling in court. That work for everyone?

They should be getting sued for making their employees cross-dress!

It looks like the Caddy Club, which is being sued, is going to end up losing. While there are some minor differences, it’s likely to create brand confusion and that the Caddy Club must “change its name” and “change the design of their uniforms”.

Petty lawsuit? Maybe. But I don’t see Caddy Club coming up with a recognizable defense.

They have at least a plausible non-infringement arguments. To show likelihood of confusion, several factors are considered by the court, including:

Similarity of the marks.
The standard is not “oh, girls in kilts, they are similar!” Rather, compare and contrast the similarities of the mark. From the two photos provided, it looks like the two uniforms are strikingly dissimilar. The colors are different. The “sexiness” factors are different. The shape and design of the kilts and tops are different. A consumer of these sorts of goods likely would not find the two similar at all.

The relatedness of the goods or services as described in an application or registration or in connection with which a prior mark is in use.
The Tilted Kilt has several trademarks for “bar and restaurant services” and “clothing for men and women.” Neither of which is related to providing golf facilities or golf services.

I look forward to seeing your counter analysis to show that, in your words, they do not have any arguments.

You missed the most important one, the golf course girls are better looking.

The Tilted Kilts don’t look all that Kilt like.

Neither do the Kilted Caddy ones. They’re all just mini-skirts with a tartan pattern.

Girls wearing “kilts” isn’t enough to to claim there are “some minor differences” in the uniforms. The Caddy Club uniforms aren’t even arguably kilts. Those are cheerleader skirts with a pink plaid design. A kilt isn’t a kilt just because of the tartan. You see where the frilly part at the bottom has horizontal lines and the top part has vertical lines? Kilts don’t have that pattern. The Tilted Kilt uniform skirts are slightly more authentic in that they look like a single piece of fabric that is wrapped around the hips, but are also ultimately just a miniskirt with a plaid pattern.

The tops are significantly different. One is just a polo shirt and the other is a plaid bra with a tied shirt.

The Tilted Kilt uniform has what is supposed to be a sporran. The Caddy Club uniform doesn’t.

You might as well say that the Tilted Kilt is violating Hooter’s trademark on waitresses wearing sleazy uniforms at a bar/restaurant for the lack of distinction that you’re making.

“You might as well say that the Tilted Kilt is violating Hooter’s trademark on waitresses wearing sleazy uniforms at a bar/restaurant for the lack of distinction that you’re making.”

Yeah, but the Kilted Caddy guys aren’t former Hooters execs like the Tilted Kilt ‘fondling fathers’, so there is no buddy-factor involved.

I’m no expert, by any means, but those don’t look like kilts to me.

From Wikipedia: “The kilt is a knee-length garment with pleats at the rear”. They are also traditionally made from heavy wool, because Scotland is cold. A real kilt will typically be in the tartan of the appropriate clan.

What those look like are thin, cheap, miniskirts in a generic tartan pattern.

I’m not impressed. Whichever side wins, good taste and respect for the racial and cultural heritage of others loses out to trashy marketing.

The tilted things at least look like they’re meant to be kilt-shaped, but the caddy’s skirts are most definitely not.

The clan/tartan pattern-association stuff is relatively modern and did not emerge traditionally at all.

Let’s see Scotland sue both for violating Country of Origin

You can search through the registry for the patterns: http://www.tartanregister.gov.uk/

But pretty much anyone is allowed to register a tartan.

“Here are some women in their Tilted Kilt uniforms, making their parents proud:”

That is totally unnecessary. Aside from that, good analysis.

If they’re supposed to be kilts, does that mean nothing is being worn underneath?

Just another knight kilting at windmills.

When Scotland becomes independent we’ll sue both of them. 🙂

I have this feeling those prosecuting are either girls (a the jealousy) or not-so-masculine boys (ah, the jealousy again!).

Disclaimer: this is a joke. You know, just in case.

I’m pretty sure plaid skirts have been around for years , are they going to sue all the Catholic school girls from my youthful memories that wore these as uniforms.

also, not every tartan patterned skirt is a kilt.

This just seems like a bad idea for a gold course. How do you not end up with a sexual harassment suit every time you ask your caddy to grab your #1 wood?

I was going to go try them out.

However, after this story I think I’ll let folks know to avoid this chain. One thing I can’t stand is trolls.

Also, the president of TK, Ron Lynch, seemed rather skeevy and odious on Undercover Boss.

I think I need some more hi-def hi-res pictures to form an opinion.

I agree. And the dispute should be decided by a jury of the Internet based on a series filmed mud wrestling matches between the employees of the two companies.

Be sure to have the contestants instructed to take off the… ‘evidence’. It mustn’t get tampered.

Who has the best Google image results? Tilted Kilt… the winner!!! Although if we look at quality over quantity… Kilted Caddy Club…Winner!!! All those who participate… winner!!!
–
Oh damn. Thats right. We were talking about a copyright issue here; weren’t we? Sorry.

Actually it was a trademark issue not copyright.

A plaid mini-skirt does not a kilt make for either of these companies.

Tilted Kilt is lucky they’re not being sued by Sport Kilt for the embroidered badges on their kilts. They’re almost identical to the ones used by Sport Kilt. But SK is run by good people and so they don’t go around suing people.

They just replaced one of my favorite dives with a Tilted Kilt (sniff RIP Bob the Fish). I was in there once and vowed never to go back, due to the terrible food and overpriced beer. Now I have a third reason never to go.

(Also, I agree with previous commenter that the “making their parents proud” comment was unnecessary. Taking cheap shots at the waitresses does nothing to help make the point that this is a bad lawsuit. Let’s stick to taking cheap shots at people who deserve it, like the RIAA).

This could get really interesting if us guys who make a living out of wearing kilts gets to the attention of these lawyers.
I am referring of course to myself, Badpiper, Red Hot Chilli Peppers and of course not forgetting all the Scots regimental bands, ah, that would also include many US Police and Fire Service bands too!
Oh and just to throw another legal spanner in the works here. How about a possibly devolved Scottish Parliament suing the lot of them for use of a centuries old traditional ‘trademark’ dress? Well that would sort out a hole in their budget eh?

Judges prove daily what utter morons and clowns they all are.
Guess if you wear a tight silly wig long enough….