FIFA, the soccer/futbol/whatever organization that theoretically runs a sporting operation sure seems to actually be some kind of steroid-taking IP lawyer in practice instead. Much like the method by which the Olympics does their business, FIFA has always gone overboard in enforcing its trademarks. It insists on getting airline ads that don’t even mention it pulled down, it goes after breweries, and it generally behaves like a psychopathic rich kid who thinks all the toys in the world are his and his alone.

Reader John Katos writes in with the latest head-scratching example of this. Nico Rosberg is big in the world of F1 racing and he wanted to celebrate the German’s winning the World Cup with a helmet in an upcoming race. German pride, in other words, because when has that ever gone wrong?

Earlier this week, delighted with the national team’s world cup victory in Brazil, Mercedes driver Rosberg announced he will wear a “special edition helmet” this weekend in Hockenheim. The 29-year-old German revealed on social media that the livery includes an image of “the FIFA trophy”. 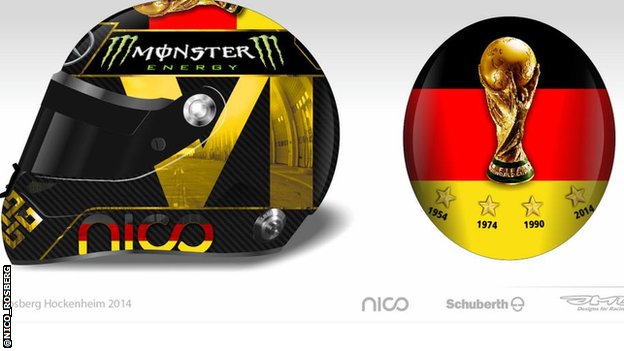 See that thing on top of the helmet? You know, the one that looks like Cthulu’s claw reaching up to grip some kind of golden testicle? Well, that’s the World Cup trophy, which, really you guys, come up with something a little better than that for the World freaking Cup. Regardless, the uber-lawyers over at FIFA saw this display of national pride and free FIFA advertising and took a dump on it.

We reported earlier that reproducing the image of the trophy falls foul of the world football federation FIFA’s strict rules protecting its ‘official marks’. The Mercedes driver’s public relations manager Georg Nolte confirmed: “There will be an update on Nico’s Germany helmet design today.

Yes, rather than working out some kind of way to license the helmet for free so as not to risk the dreaded not-protecting-the-mark penalty that seems to drive so much of this heavy-handed nonsense, FIFA just killed off the free advertising. Quite sporting of them, if you ask absolutely no one.

They could easily cover that up WITH PRETTY MUCH ANYONE ELSE’S LOGO because that piece of advertising real estate is worth a fortune.

They should just cover it with a sticker that says…

And just a suggestion. Next time, actually start with a damn CUP. Seems pretty dumb to call it the “World Cup” when it isn’t really even a cup.

The original was (sort of) a cup.This is a replacement required when Brazil got to keep (and then lose) the original for winning 3 times.

The original qualifies as a cup. This is not a cup. There should be a law should be a law. You don’t get to call your trophy a cup if it is not a fucking cup regardless if it once was or not. Same thing with belts and medals. Can you imagine if the NFL called the Lombardi Trophy the “Lombardi Belt?” How dumb would that be?

Damn it! I hate when I reword sentences have way through and then forget to proofread them.

Seems pretty dumb to call it the “World Cup” when it isn’t really even a cup.

Seriously, how the heck are you supposed to drink your victory beer out of that thing.

It’s a cup with the world in it.

What you call “free advertising” an IP maximalist calls an “untapped revenue stream.”

Now that they are done extracting all that money out of the Brazilian economy they need to spend it on something so why not lawyers?

It turns out allegedly that the complaint really came from the official auto company of the World Cup, Hyundai. After all Nico drives a Mercedes!

“the soccer/futbol/whatever..” Tim/Trevor/Whatever Geigner it’s called Football and has been called that longer than the United States of America has existed. Thank you, that will be all.

I’m sure you’re right, but like everything else to do with soccer, I just can’t work up the energy to give a shit….

There have been games called football for a long while, but they are the common ancestors to all footballs. Soccer was only codified in 1863.

As far as I can tell, “Soccer” is just the proper name for a vary specific version of football. “Football” is a generic name referencing at least six different games. When we say “Soccer” we’re just being specific.

To be fair, “American Football” seems to be the correct name to use when referencing the game played in America. So we’re not really being specific ether.

We adopted the term from Britain, who have since decided it’s too uppercrusty. Like a lot of Americanisms, it’s actually older English.

The interesting thing is the increasing adoption of the Spanish spelling and pronunciation of “futbol.”

The word soccer was actually first used in England to differentiate it from the other football game played at the time which became Rugby. It’s an abbreviation from the term Association Football, it’s just not used any more over here.

And while I have no respect for FIFA as an organisation, I’m pretty sure if a football player had done something similar using a famous FIA symbol, FIA would have reacted the same way.

Yup – soccer is a british term

They should replace the trophy with something like the following…

The World Cup doesn’t need “free advertising” after the event is over, its absolutely irrelevant. More importantly, it actually would have cost FIFA a lot to say yes.

Hyundai/Kia paid an ungodly sum to be the official car sponsor of the World Cup, for use in advertising world wide. Hyundai was not going to want Mercedes gaining a free ride of world cup association because one of their drivers just happened to be German.

If FIFA had said “yes”, complete with that big Mercedes logo in front of the helmet design, any “benefit” from free advertising would have been lost as now every FIFA sponsor knows that their exclusivity can be diluted at a whim.

Like you said, “the event is over” ….. Hyundai/Kia has no right to nor can they dispute anything – official sponsorship ENDS after the event is over. Who prints advertising after an event??? FIFA needs to get a clue – Go Nico, Go Germany!!!

Depends on the contract and how long it lasts. Sponsors can milk the fact that they sponsored it for awhile afterwards still so it probably doesn’t end right afterwards.

Even if the event is over, Hyundai/Kia’s FIFA sponsorship is paid up through 2022.

so, what you are proving, is that we have the korporate tail wagging the civilization dog…
reason #158582352 why korporate domination of OUR lives is eeee-vil…

it is NOT that it is or isn’t ‘illegal’ (again, what meaning that has when the 1% ignore laws with impunity, and the 99% get crosswise with secret laws before they get out of bed in the morning), it is that it is IMMORAL…

i know that is an ancient word that has not only ZERO meaning, but NEGATIVE meaning in the korporatocracy we all worship, but some assholes like myself still think being ‘moral’ is an admirable goal over being profitable…

too many do not think that…

We at FIFA know we’re corrupt and have no souls. We suck the money out of unsuspecting countries with the promise of tourism boosts. Then your stadiums go to shit and you the country get left with billions in debt. Go fuck yourselves.

IDK, does the World Cup (most viewed event in the world) really need advertisment? Is someone going to be watching German racing, and NOT realize that professional soccer is a thing?

Obviously they are being assholes about it, but thats sort of their whole deal.

“German pride, in other words, because when has that ever gone wrong?”

Godwin already in the posting rather than the comments? Impressive.