The ACLU’s FOIA lawsuit over documents related to the NSA’s activities under Executive Order 12333 has knocked a few more pages out the agency’s tightly-closed fist, most of which are related to its signals intelligence programs. Included in the released documents is an 89-page Inspector General’s report on the investigation of accusations made back in 2009 by David Murfee Faulk, who alleged that NSA linguists were listening in on the phone calls of military personnel, journalists and aid workers and sharing those containing “pillow talk” with other analysts.

As for the accusations of NSA linguists and analysts listening in on phone calls of American citizens located overseas for purely prurient interests, the NSA’s under-utilized Inspector General says there’s no evidence this occurred. The report runs 89 pages, most of them completely withheld, but what little the NSA agreed to release indicates a lack of evidence to support David Faulk’s accusations. 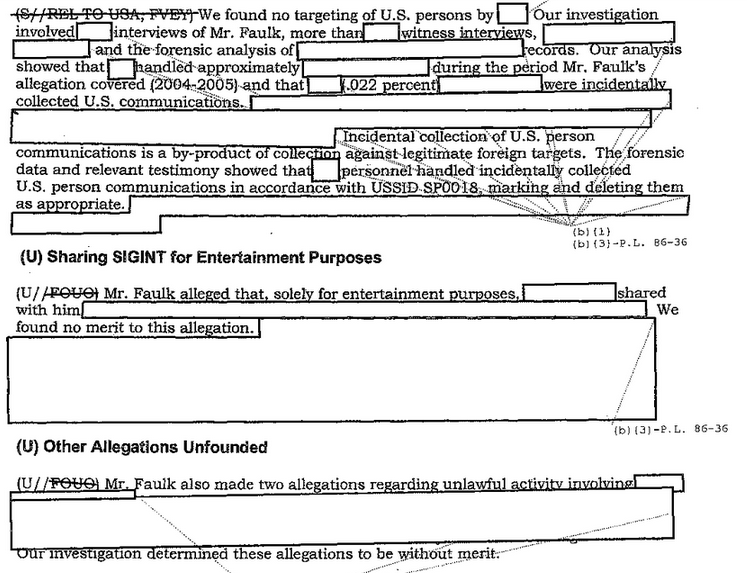 There are 68 pages withheld in full (and five pages that are “intentionally left blank”), so any nuance has been left on the redacting room floor, along with any other evidence of wrongdoing. A memo from the Inspector General’s office hints at other impropriety unrelated to the linguist’s accusations.

During the investigation of alleged improprieties at NSA Georgia (NSAG) in 2004 and 2005 and reported by a former NSA assignee in 2008, we identified some practices in [REDACTED] that are inconsistent with established NSA/CSS policies and procedures. For details concerning the investigation, see Report of Investigation Regarding Alleged Improprieties at NSA Georgia (Report of Investigation), IV-09-0003, August 14, 2009. These practices may increase the risk of mishandling U.S. persons information and, therefore, require your attention.

Well, we have that report but we can’t actually read most of it. There’s hardly anything left but the IG clearing the NSA of the specific misconduct alleged by two NSA linguists. The IG memo lists other non-compliance issues like the dissemination of raw US persons SIGINT, as well as violations of reporting procedures and retention guidelines, but the specifics of the IG’s findings remain hidden. I would imagine a legal challenge to the massive redactions in the Inspector General’s report will be forthcoming. There’s more self-interest than security apparent in the NSA’s very selective exposures, making this exculpatory information highly conspicuous in its inclusion.

One should always Inspect the Un-Inspected.

How well does that work as a chat up line? 🙂

Having just the conclusions of a report without having the context of it (what were the facts and reasoning that led to the conclusion?) is worthless. All it tells you is what the opinion of the author of the report is, but gives you no basis on which you could analyze, accept or reject that opinion.

To extend on John’s conclusion, without knowing whether the facts they had available were a complete and accurate accounting of the situation, we cannot know whether the report’s conclusions are even meaningful. Given NSA’s tight-lipped and tight-fisted attitude about information in general, and their absolute insistence about the high quality of their internal controls in particular, it seems unlikely that they would be fully forthcoming with even a security-cleared auditor. If they are not honest with the auditor, then even the best intentioned auditor will not find evidence of fault.

“We have carefully examined all the evidence the fox saw fit to provide, and find no proof that he got into the henhouse….”

There was some disturbing evidence regarding the chicken coop, but that falls outside the scope of this investigation.

“If you tell a lie big enough and keep repeating it, people will eventually come to believe it. The lie can be maintained … votes decide everything.” –Josef Stalin ..

We’ve realized that we’re having a very difficult time finding the enemy. It isn’t easy to find a Vietnamese man named “Charlie.” ? from Good Morning Vietnam

I swear there is something disturbingly familiar between the quote and the theme of this article.

Hey NSA then please explain the Camp Taji Girls powerpoint that was passed around to all the S2 Shops in 05-06, I know all of those enlisted and officers would appreciate an explanation as to how those photos got collected assembled and then passed around. Veterans know your full of shit, why because we maintained your pos equipment during those deployments.

The report says that US persons serving overseas were not targeted and that conversations were not shared “solely for entertainment purposes”. That’s not quite the same as saying “We didn’t listen in” or that “We didn’t pass recorded conversations around”.
This phrasing suggests that they both do listen in (for non-entertainment reasons) and that, when they get a “good one”, they possibly do pass it around.

It is rather amazing how easily the lie is perceived once you learn to actually read the exact meaning of the “answers” provided by US Spy Agencies… or any US Federal Agencies…. or Any other nation’s Federal Agency, for that matter.

One begins to wonder if perhaps there is a question on all federal employment applications that reads: