This Week In Techdirt History: November 9th – 15th
SiriusXM Loses For A Third Time On Public Performance Of Pre-1972 Works, This Time In New York

Funniest/Most Insightful Comments Of The Week At Techdirt

Our commenters were understandably galled by this week’s revelation of footage showing just how brazen police are about abusing their asset forfeiture powers, and so that’s where both of our most insightful comments of the week come from. In first place is John Fenderson pointing out that cops shopping for stuff they want isn’t the only problem:

In addition to the obvious fact that cops shouldn’t be stealing stuff, there’s the other problem of cops using it as a form of punishment.

When that separation goes away, a huge chunk of public safety and freedom goes with it.

In second place we’ve got Dale, who went a step further in the calling-a-spade-a-spade department:

We don’t need no stinkin’ budget!!

‘Shopping’ implies that you pay for what you take. This is armed robbery, plain and simple.

For editor’s choice on the insightful side, we start out with one more comment from John Fenderson, this time in response to chilling comments from law enforcement officials about encryption:

Who the hell are they?

Leaving aside the idiocy which is the assertion that it’s possible to weaken security against some attackers (the government) without weakening it against all attackers, I find this statement simply offensive:

“Privacy is important but in my view the security of communications methods and devices is growing beyond what any genuine domestic user could reasonably require.”

And who are they to say what anyone else “reasonably requires”? But I know what they mean: they mean that nobody except criminals would “reasonably require” privacy against governments, despite the entirety of history showing us why this assertion is laughable.

AT&T is basically saying that if they can’t charge money to unfairly prioritize traffic that is already paid for, then they won’t build out their network.

If you can’t out compete your competitors doing exactly this, then you don’t deserve to be in business.

Over on the funny side, we start out with the news that a recent Steam update pulled 17 songs out of already-bought-and-installed copies of Grand Theft Auto: San Andreas. One commenter suggested that Rockstar might just change everything in the game to asparagus in order to avoid future licensing issues like this, but Just Another Anonymous Troll saw the flaw in that plan:

Our second place comment comes from Scote in response to the news of a Spanish copyright executive claiming a $50,000 brothel bill was for work-related activities:

I should point out that there was only one whore in those brothels, the rest were sex workers.

This week, we wondered why GOP officials don’t realize that net neutrality is supported by the vast majority of Republicans and Democrats. Our first editor’s choice for funny goes to an anonymous commenter who offered an answer:

Finally, we’ve got a comment that I must preface by saying: we try very hard to block any low-quality or sketchy ads that get served on Techdirt through the ad networks we use, and in the big picture we are trying very hard to move away from network display ads altogether, but once in a while, something gets through. Sometimes it can even lead to comic irony, and Mason Wheeler caught one such instance on a recent post about anti-bad-review crusader Roca Labs (I’ve swapped out the image link for the screenshot itself): 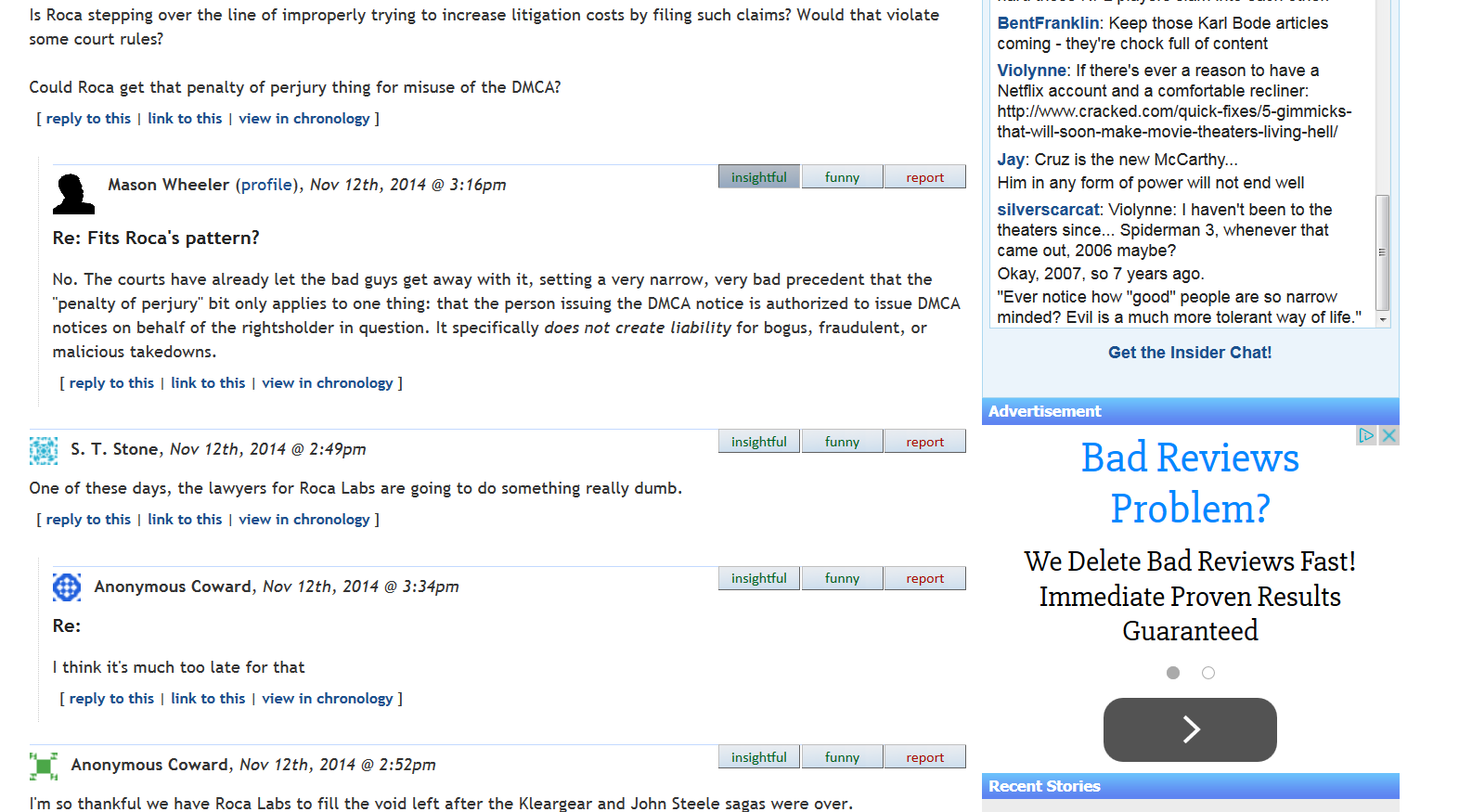 That’s all for this week, folks!

Comments on “Funniest/Most Insightful Comments Of The Week At Techdirt”

It is awesome that you chose Mason’s comment as an editor choice even if it shows a flaw in the ad process and slaps TD in the face with irony. I’d LOVE to see the usual critics point the fact when they incur in irony.

Anyway, have my hoooray!

Expect them to. Masnick could criticize Google endlessly and they’ll still call him a Google shill.

What else would you expect from people who eat paste?

It’s called targeted advertising. The add company probably figured Roca will probably read that post and so they saw it as a good opportunity to advertise. Heck, why not.

That would be creepy but clever. Seems Roca is ran by idiots and there’s no easier source to extract money from.

You forget about the Power of Stupidity. It powers Fox News every day.