FBI Still Standing By Its 'North Korea Did It!' Claims On The Sony Hack
Benihana Thinks Morons In A Hurry Will Be Confused By Rap Artist Benny Hunna's Name

Friend (and frequent Techdirt contributor) Derek Kerton passed along a screenshot of his own recent experience trying to follow a Techdirt link at the Toronto airport and having it blocked: 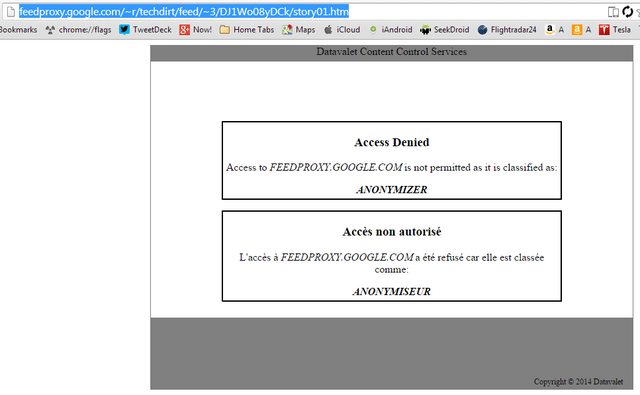 The block here is clearly not directed at Techdirt, but rather at Google’s Feedproxy service — which was formerly Feedburner, a company Google bought years ago. Many, many, many sites that have RSS feeds use Google’s service as it makes it much easier to manage your RSS feed and to do some basic analytics on it.

In this case, it appears that Air Canada has (for reasons unknown) wasted good money on a company called “Datavalet” which offers “Guest Access Management” for companies who offer WiFi access to customers. Datavalet proudly highlights Air Canada and famed Canadian donut chain Tim Hortons among its customers.

And yet, despite its sole business apparently being building systems to let people access the internet, Datavalet’s tech geniuses can’t figure out that Google’s RSS feed service is not, in fact, an “Anonymizer” but merely a system for hosting RSS feeds.

These sorts of stupid false positives are not at all uncommon in the filtering business — and Datavalet is not alone in stupidly filtering out and blocking access to things it should totally allow. This story just demonstrates, once again, the ultimate stupidity and futility of trying to block internet access. No matter how well-meaning you might be, you’re going to do it wrong and you’re going to block plenty of legitimate content, including (in this case) tons of well known news publishers who rely on Google’s feedproxy service to serve up links to RSS readers, Twitter, Facebook and more.

this is being done because it can be! governments have begun implementing website blocking, so how can it be denied when a company wants to do it? the UK was one of the first, if not the first, to implement blocks, using the ‘protect the children’ excuse, when what it was really doing was whatever it could to help the entertainment industries, mostly in the USA, rather than get those industries to start giving customers what they asked for and to help, not hinder, technological progress which is aided by the internet. instead of doing this, the UK government and others since have done what was demanded by the industries. that slippery slope wont be easy to get off now and it wont be long before the blocks come into play in the upcoming General Election there! Cameron is going to pull any and all dirty trick he can think of, not to get the country back up and running but to get the NHS and the benefit system completely demolished!!

“Google’s Feedproxy service — which was formerly Feedburner, a company Google bought years ago”

Are you sure that you have this the right way around?

So far as I can see the active name is Feedburner, not Feedproxy.

Are you sure that you have this the right way around?

So far as I can see the active name is Feedburner, not Feedproxy.

Yes. The service is still called Feedburner, but all of the RSS feeds show up under the feedproxy.google.com URL…

Interesting. My URLs still say Feedburner and always have, and I’ve never seen nor even heard of the Feedproxy URLs.

Not that people should be using Google services anyway…

when I worked for one company I had to argue that the IT dept was blocking me from sites that were needed to do my job.
the rogue website was for Netscape navigator downloads which back in the day was what we recommended they use.
I had to explain how I could not help them if I could not see the website to find the download (they changed it like every six months)
in the end I won out but for 6 weeks I had to tell people sorry cannot help you

The reason for blocking being “anonymizer” leads me to conjecture that they block any (sub)domain containing the string “proxy”, which is obviously a great way to block any proxies that allow to access blocked websites.

Air Canada doesn’t administer Pearson (I assume this is about Pearson, not Billy Bishop Airport)

The article is about WiFi access in the Air Canada lounge at Pearson. Datavalet manages access for all of their lounges.

I was in a tummies and got the same thing with TechCrunch.com. I needed to email and bitch about that. They did respond in a couple hours they’ll lol into it surprisingly.

Tummies, for you non-canucks, is an obvious typo of Timmies, a.k.a, Tim Horton’s donut shop.

Not an embryo discussion.

Datavalet is a wifi provider (associated with Bell?). You seem them in airports and tim hortons etc. Don’t think they have anything to do with aircanada other then maybe ads.

Can you fault them?

Laywers (accountants, other paid advisors) give advice to companies.

The managers run the company, not the lawyers (accountants and other paid advisors).

Sounds like I wouldn’t want to access the internet with my PC using their “free” WiFi, at least unless it were via a VPN.

It’s probably a generic “proxy” word-based block, nothing to get your panties in a bunch over. Just use your data plan if you’re not happy, what’s the big deal? It’s not like you’re paying for a service there.

They also handle a lot of hotels.
They have been known for ad insertion and as a vector for malicious code as well.

On Linux it’s /etc/hosts, on Windows it’s buried somewhere in C:\Windows\System\etc\hosts if think, it’s been a long time. Mac is probably the same as Linux

The same happens with Queensland Rai’s free WiFi with no evidence at all that they care the slightest. Of course, they also impose a 10Mb download limit…

This has nothing to do with Datavalet. It’s Air Canada that has set the filtering standard. Datavalet just carries out what their client pays them to do.

FBI Still Standing By Its 'North Korea Did It!' Claims On The Sony Hack
Benihana Thinks Morons In A Hurry Will Be Confused By Rap Artist Benny Hunna's Name
Follow Techdirt