from the terrorism is just things we don't fully comprehend dept

Jeremy Hammond — a member of various Anonymous offshoots — had the misfortune of being prosecuted in the United States. While his UK accomplices in the Stratfor hack were sentenced to 1-3 years, Hammond received a 10-year sentence (along with three years of supervised release) for his participation. The length of Hammond’s sentence was mainly due to the CFAA (Computer Fraud and Abuse Act) being a horribly-written law (and there’s a possibility it will get much worse in the future), and the FBI’s willingness to toss the hacktivist under the bus for the sins of Anonymous, while glossing over the fact that it was an FBI informant (Hector Monsegur, aka Sabu) who handed out hacking targets to Hammond.

Hammond’s lengthy prison sentence may also have to do with other bad laws written by legislators who didn’t have a full understanding of the issues they were attempting to address. A leaked document obtained by the Daily Dot [pdf link] shows the FBI put Hammond on the government’s terrorist watchlist more than a year (Date/Time Entered: 1/19/2011) before he was arrested for the Stratfor hack.

A leaked document originating from the New York State Division of Criminal Justice Services (DCJS) reveals that Hammond was considered a “possible terrorist organization member,” and indicates that he was placed on the multi-agency Terrorist Screening Database (TSDB), alongside individuals suspected of ties to Al Qaeda, Somalia-based extremists al-Shabaab, and Colombia’s leftist FARC guerilla movement.

Here’s the pertinent information is all of its teletyped glory: 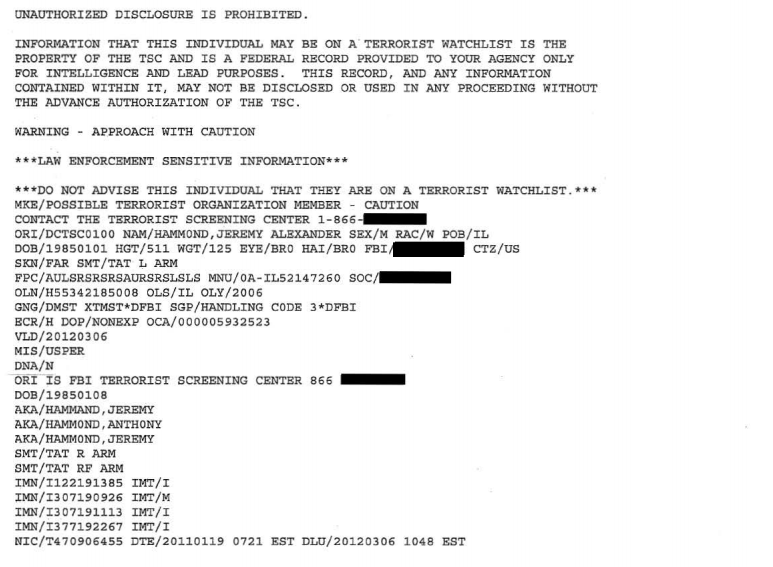 The document also includes Hammond’s rap sheet, which up to that point, only includes fraud and unauthorized computer access related to the theft of credit card information from a conservative website. What it doesn’t include is anything that might justify his addition to the terrorist watchlist — unless the FBI considers protests to be a terrorist activity.

Of course, the government agencies that have the power to place US citizens on terrorist watchlists don’t seem interested in providing justification for their decisions. Just having a vague sense of unease seems to be all the “evidence” any agent/official needs to declare a person a threat to this country. Nearly 40% of those currently on the government’s terrorist watchlist have “no known affiliation to recognized terrorist groups.”

The government has long shown it doesn’t understand hacking and is no fan of activism — generally viewing both activities as some sort of threat. So, on the watchlist Hammond went, something that presumably played a part in the prosecution’s push for a decade-long sentence for the hacktivist. His actions and motives were often far from pure, but his imprisonment appears to be a result of the FBI throwing an unwitting operative onto the judicial scrapheap before moving onto its next sting operation.

I find it more curious how little of the document was blacked out. I’d think a document like this would, by its very existence, be so embarrassing that it would be 90%+ redacted. Instead, they redacted so little that you can actually read what it says.

i’d leave your door cracked for the next few days to save your next of kin the cost of the jamb, door, knob, and deadbolt replacement when they put the house on the market following your probable death in the inevitable no-knock raid. also, invest in body armor for your baby’s crib.

aiding the terrorists! for the children! protect starving artists!

The google search gets you the publicly advertised phone number(s). For all we know the redacted number is one that has to be given out by the ‘owner’ of that number, and is not intended to be public. If one doesn’t have that number they must call and go through an operator or AVS system.

This was my thought. You can google the phone number for my workplace without a problem, but won’t find the phone number going directly to my desk that way. I assume the redacted number is to a specific person, not the agency’s switchboard.

Warning: exercising your constitutional rights might make our secret services consider you a terrorist.

That means your secret services are a terrorist organization.

‘May’? Try ‘Will’, after all, only terrorists or criminals would even know what their rights are, or try exercising them. /s

I’m glad this article mentions how 40% of the 1 million+ people placed on the Terrorist Identities Datamart Environment (TIDE) watch list, have absolutely no known ties to terrorism. That’s close to 300,000 people being placed on a government watch list simple due to ‘reasonable suspicion’, otherwise known as a hunch, with no solid evidence to backup the investigator’s claims.

It’s hard to believe there’s over a million terrorists in the world. It seems like the number of terrorists is increasing instead of decreasing. Which would imply the global war on terror is having the opposite effect of it’s stated goals, and is creating more terrorists than it’s eliminating.

didn’t you know the ridiculous list of things that make you a potential terrorist in America according to the DHS?

If your missing a finger
If you have over 7 days of food in your home
https://www.youtube.com/watch?v=X2N1z9zJ20k&feature=player_embedded
If you advocate privacy
if you pay with cash instead of a credit card
if you wear a hoodie
if you buy flashlights
if you own guns and or ammo

Everyone is a terrorist apparently, much easier to arrest people that commit no crimes if you make basic living illegal.

I’m reading the docs, and it seems like he was added to the screening center list in 03 (during his early days, when he was arrested at the RNC convention protests)

It also doesn’t list his felony mob action conviction from 2010 (the announcing that Chicago wasn’t getting the 2016 olympics – when he got home after being released, he was proud of is arrest, and the violence/damage he caused and openly boasted of it.

and it also doesn’t mention the 04 battery conviction, or the 2010 ‘storming’ of a restaurant as part of a masked group of 5 because he didn’t like one of the people eating there’s views.

He’s without question a thug and an incredibly intolerant one at that. He’s hit out at his victims for speaking out (“Snitches get stitches” is a favorite phrase of his), so is it really such a stretch that he should be on a list of people to watch?

He’s not some innocent caught up in an overzealous dragnet, but precisely the kind of person these lists are designed to help monitor. That is to say, those that just don’t care and have no hesitation to lash out at any they deem to be worthy of attack, because they don’t share their views, or just because they dared to speak out against him.

You are right on all points, but what does any of that have to do with being connected to a ‘terrorist’ organization?

because they are authoritarian kreepazoids who buy into ‘if we don’t like them for whatever reason (or no ‘reason’ at all), they are terrorists…’ mentality…
declare them non-persons, then anything goes…
we’re all non-persons, now…

A terrorist is someone who uses violence, or threat of violence, to [or attempt to] intimidate or cooerce societies to follow an ideological position which is usually political.

He has lots of convictions for violence, for attacking people based on their thoughts and beliefs, and prefaces them all with a justification based on his political ideology. That would fit him into the “terrorist” mold by pretty much any definition I’ve been able to find. Sure, he never blew anyone up, or shot them, but that’s mostly because he’s smart enough to know that never really works.

Is he a “terrorist” as most people would think of it? No. But then again, he’s not really an ‘activist’ either. My experiences with him are more that he was a spoiled brat with minor aptitude in exploiting sql databases. However, instead of turning that to the hard, thankless work of actual activism, he acted like a spoiled brat, and now plays the Martyr card, because he isn’t as smart as he thinks he is (the drug convictions alone should prove that!)

That’s right, it’s hard to see how he can correctly by labelled a “terrorist” — which is the only point under discussion here. You can be a despicable, rotten, violent person without being a terrorist.

A terrorist is someone who uses violence, or threat of violence, to [or attempt to] intimidate or cooerce societies to follow an ideological position which is usually political.

You mean like law enforcement using physical violence, or threat of violence, in order to enforce the ideological position of bills passed by a political Congress?

28 C.F.R. Section 0.85 Terrorism is defined as ?the unlawful use of force and violence against persons or property to intimidate or coerce a government, the civilian population, or any segment thereof, in furtherance of political or social objectives?.

They must believe he’s really dangerous if they’re telling agents he can’t be even slightly delayed. Further proof this has nothing to do with terrorism.

I expect that was because (1) they couldn’t come up with any sort of standing justification to hold him and (2) they were so determined to deny that any particular person is on the list, and they couldn’t detain him without implying he was on the list. Thus, the secrecy of the list takes precedence over all else.

The thing is that the document instructs the cops to try to obtain sufficient identification so that it can be confirmed whether or not he’s the terrorist they’re looking for, but don’t detain or delay him in doing so.

This despite the fact that one of the legitimate reasons to hold someone without arresting them is when the cops think he might be someone they’re looking for but aren’t sure — then they can hold the person until identification can be established (up to a maximum time — I think it’s 48 hours, but I’m not sure.) So they reason for the advice not to detain him isn’t based on the lack of authority.

one of the legitimate reasons to hold someone without arresting them is when the cops think he might be someone they’re looking for but aren’t sure […] So they reason for the advice not to detain him isn’t based on the lack of authority.

… or maybe it is. The police can’t be “looking for you” for no good reason just so they can arrest/detain you. They need some legal justification. They can fool the FISA judges but are perhaps not so confident in their ability to justify this to a real judge.

How many people from the CIA have been charged with the known hacking of the Senate system? Certainly a far worse crime than the Stratfor attack, but not a one of the CIA was even publicly slapped on the hand.

the DHS classifies protesting as low level terrorism. the founding fathers as terrorists whose ideals should be hated not revered.

Dissent is being criminalized.

Of course the term terrorism is a buzzword meant to get rid of anyone whoever is in charge doesn’t like.

You can be a terrorist if you have over 7 days of food, so most Americans are therefore potential terrorists under that guideline