Pentagon Offered 'FOIA Terrorist' Jason Leopold A Stack Of Documents To Just Shut Up And Go Away Forever
Why Do Our Senators Keep Calling Ed Snowden 'Eric Snowden'?

With Ross Ulbricht sentenced to life in prison to make an example of him in the new online version of our nation’s drug wars, it raises a similar question to the one in the offline world: does this kind of thing have any impact at all? The Economist has a chart suggesting that nothing at all is changing and demand creates supply, as the number of drug listings in dark markets continue to grow, even as some of the players are shut down via law enforcement (Silk Road, Silk Road 2) or scams (Evolution): 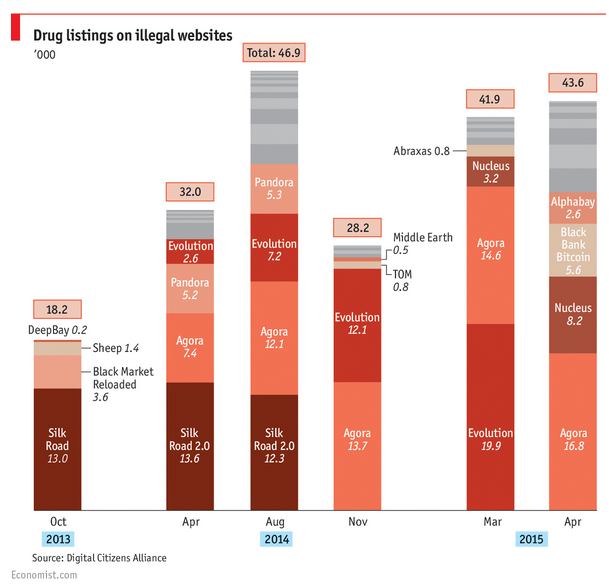 Of course, there’s one caveat on this, which is that the data is from Digital Citizens Alliance, a known MPAA front, whose role is to undermine online internet markets of all kinds. But the general point shown in the chart is likely to be fairly accurate. As soon as one of these sites disappears, others quickly step in to fill the need. That’s generally how markets work. If there’s demand, supply will follow. In fact, data from other sources seems to support this basic point. Lots of these markets close (and very few of their operators are ever arrested), but plenty more step in to fill the void.

And, of course, the standard response to all of this is that law enforcement has to keep playing this game of whacking moles because they’d like to think that this at least puts some sort of limit on the activity by making it marginally more “expensive” for suppliers in terms of risk. Still, it seems like lots of other things online, this law enforcement/mole whacking approach isn’t particularly productive, and only serves to make the issue more diverse, more underground, less regulated and less safe.

Perhaps, rather than continue down that path, it’s time to look at alternative approaches.

The ignorance of our govt i.e. the US government is astounding. The boomers politics that lead to this war on drugs being declared by Ronald Reagen’s and Bill Clinton’s politics should just be admitted as a failure already and alternative strategies developed. I feel as a millennial that the government should regulate and distribute these drugs so as to remove the underground economy and criminals from our streets. If these people can still get drugs anyway irregardless of how many doors they kick in or drug dealers they arrest or kill, whats stopping them? In addition police militarization is making our country increasingly unstable as more and more distrust the police/government in our country. Why can’t the government admit failure and enable countermeasures? Why can’t the US govt regulate and tax these drugs and get rid of the underground markets this way?

Legalize drugs and suddenly the for-profit prison system is in deep trouble, as the majority of their prisoners are suddenly locked up for something that’s no longer a crime, and the number of future prisoners will take a massive hit for the same reason.

Would mass legalization, and a shift towards treating drug addiction the same as any other form of addiction absolutely decimate the drug cartels, and drastically cut down on drug related crime? Almost certainly, but no-one in the government or prison system actually wants that, so it’ll never happen.

Too much money and power in the current system for it to be changed any time soon, and if it leads to the highest incarceration rate on the planet as a result, well, that’s just treated as an acceptable price to be paid to maintain the current system.

Do you think my generation will be successful in advancing this and the police militarization issue in future elections when more millenials start to vote?

Yes, if they actually vote.

I would like to think so, but at this rate I’m rather worried that things are going to get worse, much, before that turning point comes.

The problem is, voting for better people is a start, but when, as is the case now, the entire system is corrupt from top to bottom, voting on it’s own is not nearly enough to turn things around.

It’s also a societal problem, the US public in general seems to absolutely loathe the idea of reforming criminals, and would much rather see them suffer, and the prison system reflects this. That would have to be changed before any real reform of the prison/’justice’ system could go forward.

As for the militarization of police? Honestly I don’t really see that one being solved without a massive, ‘fire everyone and start from scratch’ change at this point. The ‘Us vs Them’, ‘The police are the good guys, the public is the enemy’ mindset among a great many police makes voluntarily giving up their favorite toys unlikely at best. They’re not going to do so on their own, and the ones who could force them to seem utterly disinterested in doing so, so that one’s not going to be easy to fix.

Just to prove your point a little more strongly, it was Richard Nixon who declared war on drugs.

The Feds began actually began their undeclared war on narcotics in 1914 with the passage of the Harrison Narcotic Tax act. A 101 years of failure for everyone except those who profit by it — the unlawful criminals and the lawful ones.

…it was Richard Nixon who declared war on drugs…

And as far as for-profit prisons: at least in my area there was no such thing until the 1990s. Once Nixon made his declaration both the feds and states started imposing jail time and enacting mandatory sentencing laws (for other crimes as well as “drug crimes”). Note that the concept of mandatory sentencing has never been declared unconstitutional but there have been individual cases whose ‘mandatory sentence’ was overturned as “cruel and unusual”.

ah ya, sometimes I lose focus and forget things like that being a millenial. The most influential presidents for my generation as per our opinion would be in this order Clinton, Reagan, Nixon. Nixon might have started it but, the others advanced his politics and policies.

Watch this space. Continually using a word or a spelling of a word legitimizes it and sooner or later it ends up in the dictionary.

But I thought unlimited supply was driving demand.

While I’m as anti-“war on drugs” as most of the people on the internet, posting a chart about the volume of drugs on SR version 30 from April and trying to make an argument that “The volume was up in April and a sentencing that occurred at the end of May didn’t have any effect on that, therefore” is sloppy at best and intentionally misleading at worst.

Make this post when you have the stats from June and then there would be a discussion to be had about making examples not working, or make a post about how the volume has risen with no reference to the Silk Road sentencing, but trying to tie the two together this early is a surefire way to get anyone worth convincing to handwave it off.

Wasn’t Ulbrict like 9 months in jail after arrest? I don’t think he was operating it from his prison cell lul. Wikipedia references his arrest http://en.wikipedia.org/wiki/Silk_Road_%28marketplace%29

Ah, but this does not include recent data from after Ulbrich’t conviction, which was bound to scare off all potential followers and handily reduce the drug market to zero overnight. You’ll see, it’s basically all gone…! All of it…!
…just a bit of patience…
…surely as we speak…
…any minute now…
…almost there…

you’re right! Ulbricht received this sentence just to make an example of him, having the nerve to do something outside of governmental control and keep away from paying taxes. what is so scary, in my opinion, is the judge went along with it! so much for integrity and honesty in a judicial system!

Sentencing someone more harshly to “send a message” is just coming down more harshly on one person for all possible future crimes of others. That’s deep.

in reality all they did was literally double the amount of darknet markets available. It’s almost like their working for the drug dealers at this point.

Their working for pharmaceticals. I think that’s an underestimated industry. It’s right up there with banks in terms of controling our everyday lives, influence and control.

You forget about Monsanto, soon you won’t be able to grow anything they don’t have control over, especially food.

This chart clearly demonstrates how big the “grey zone” is when comes to illegal drug listings. In fact, there are seven shades of it as of Apr 2015

Exactly. Plus, if the supply is not available legally, people will always step in to meet it illegally.

It’s frustrating that the RIAA/MPAAs of the world still don’t get this simple lesson after so many examples. It’s a travesty that the governments of the world don’t get it regarding something that can actually harm people while being traded on the black market.

Yeah, yeah, in both instances they most likely have a large financial motive to ignore the lesson, but here we are.

Pentagon Offered 'FOIA Terrorist' Jason Leopold A Stack Of Documents To Just Shut Up And Go Away Forever
Why Do Our Senators Keep Calling Ed Snowden 'Eric Snowden'?
Follow Techdirt