We’ve previously discussed how in 1993 Verizon conned the state of New Jersey into giving the telco all manner of subsidies and tax breaks in exchange for a promise to wire the majority of the state with symmetrical fiber. Fast forward to 2015, most of New Jersey remains on aging DSL, and the state decided it would be a wonderful idea to simply let Verizon walk away from its obligations. Of course this isn’t new: Verizon’s regulatory capture allowed it to do the exact same thing in Pennsylvania, and it’s currently busy trying to dodge New York City FiOS build out requirements as well.

But apparently, New Jersey is getting screwed harder than state residents even knew. In addition to the sham 1993 agreement, Verizon got New Jersey officials to sign off on a 2006 statewide franchise agreement that also let the company wiggle out of FiOS deployment obligations. Essentially, Newark and Fulop Mayors began noticing that many buildings in their cities were waiving their right to have FiOS installed, something not happening in more affluent areas:

“Mayor Steven Fulop of Jersey City and Mayor Ras Baraka of Newark are expected to call a press conference to discuss whether Verizon is fulfilling its obligations under the act. Public records show that 21,392 different properties in Newark have waived their access rights under the franchise agreement, opting out of any right to FiOS availability. In Jersey City, that number climbed to 25,311, nearly a fifth of the city’s properties. In richer municipalities like Trenton, Weehawken, and Hackensack, that number never climbed above 3,000.”

Verizon’s 2006 franchise agreement required that the telco make its fiber-based FiOS service available to New Jersey’s 70 densest municipalities, including poor areas in Newark and Jersey City that might not otherwise see coverage. But Verizon appears to be abusing a loophole in the franchise agreement that allows it to add buildings to an acceptable “waiver” list of exemptions should Verizon run into trouble during installs. But Verizon appears to be making it intentionally difficult for landlords in poorer cities to successfully contact and schedule installs with Verizon:

“What we understand the practice to be is that, if you’re in a wealthy high-rise next to the water in Jersey City, they will bend over backwards trying to get into that building,” says Seth Hahn of the Communication Workers of America union, which has supported the mayors in their efforts to get more cable laid. “But if you live on the other end of the tracks, they’ll send you a letter saying, ‘We’d like access to your building.’” After a labyrinth of phone calls and offerings, the landlord will often end up on a waiver list without realizing it, Hahn says.”

None of this is to say landlords can’t be difficult. In a 2013 PSC filing with the state of New York (pdf), Verizon claims many landlords refused the telco access to building infrastructure, and some even tried to charge the telco for building access. But looking at the data, it seems somewhat obvious that there’s a big discrepancy among waiver totals in poorer cities: 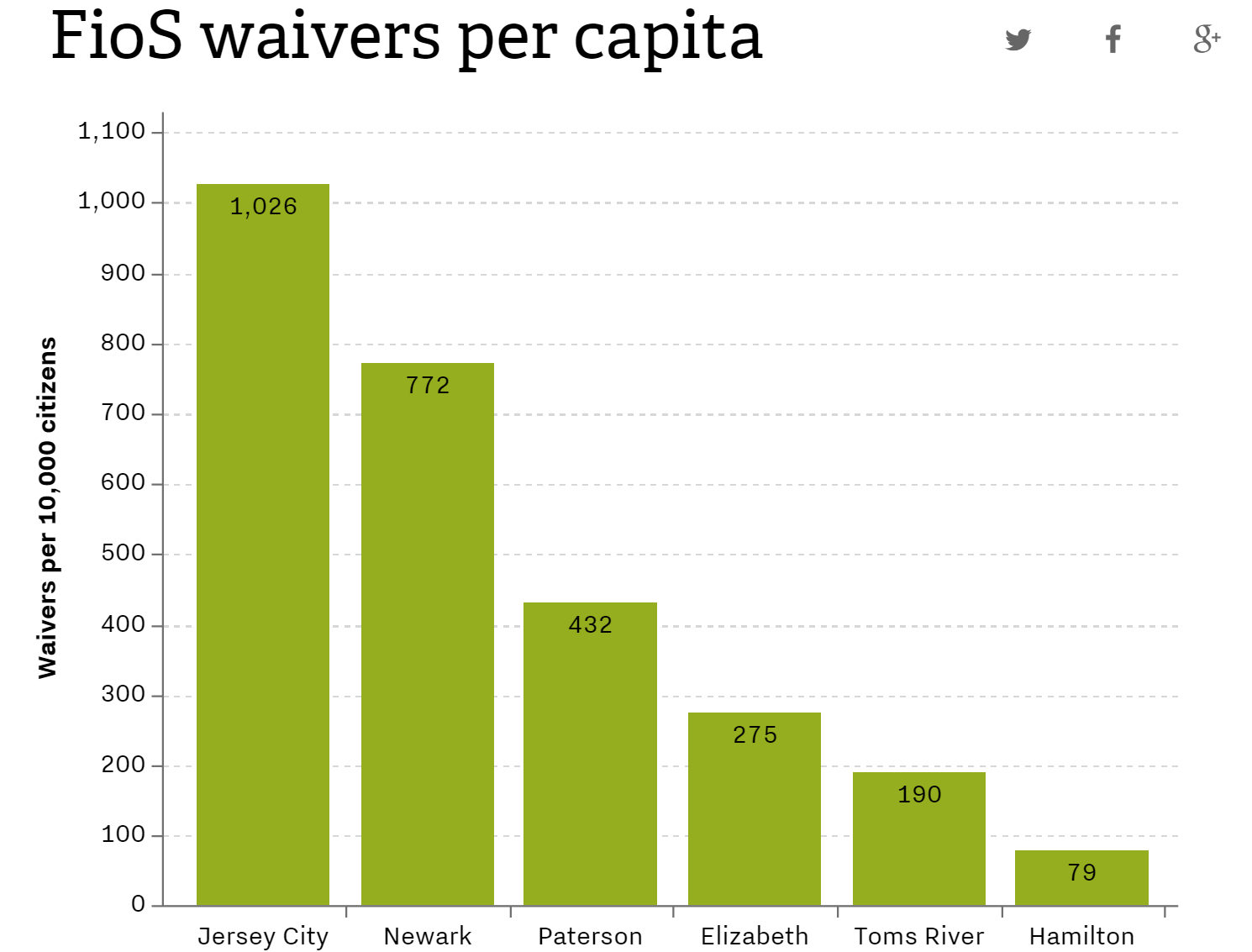 Now this could be coincidental, but given Verizon’s history on this front, claims that Verizon’s using landlords as a bogeyman to justify failure to adhere to obligations seem very likely. You’d need to investigate to be sure, but since New Jersey is already pretty lax on holding Verizon accountable, it’s painfully unlikely that the state will ever bother. And letting Verizon get away with this kind of stuff isn’t unique; this same story plays out in dozens of states nationwide. Repeatedly.

But the core of this problem is again regulatory capture and these statewide TV franchise agreements. The new laws were pushed by AT&T and Verizon in dozens of states around ten years ago, and were quickly rammed through by campaign-cash soaked state legislatures under the promise of new jobs and lower TV prices thanks to increased competition. But most if not all of the agreements were written by telco lobbyists and lawyers. As such, most of them are basically phone company wishlists, and in some places like Wisconsin, went so far as to gut all consumer protections and even some eminent domain rights.

So yeah, if you didn’t realize it already companies like AT&T and Verizon all but own many state legislatures, as evident by the fact they literally write the laws governing their behavior. The end result of that may not be surprising, but the fact that we never seem to learn from decades of this kind of behavior should be.

You keep targeting Verizon, this time with shotgun of “regulatory capture”, but unless you apply the same suspicion and cynicism to EVERY corporation then you’re a) wrong, b) a fool, c) actually a hidden partisan.

All you need to know whether any corporation is so corrupt as ingenuity allows is simply that it’s a corporation. Morality or other human good doesn’t apply to legal fictions. It’s completely stupid to assume that your individual morality applies to corporations which are created solely to escape morality: the “Limited Liability” means only money losses are possible for anything the corporations does (observably true), no moral sanctions let alone prison time will be applied to the individuals who do the acts.

You cannot pick and choose among corporations any more than you can among wasps. Their predatory nature is fixed and definitely outside your control. Government is supposed to keep them under control. The only rational policy is to advocate constant heavy anti-trust, so that executives live in fear, rather than we the people. You “libertarians” have helped neo-cons loose amoral and immortal beasts and results are entirely predictable.

Now, you’ll ALL agree with that, but two minutes later, be back to thinking Google (or whatever corporation) is your friend! You’ve been thoroughly indoctrinated with corporatism and you too have been captured by it.

Attempt #5. If able to compete on even basis (including not having my posts hidden), I’d totally run this site! Thanks for making it a challenge, kids!

Honestly, why do you even come here? If I find a site that I visit to be as filled with things I disagree with as much as you seem to here, I stop going. I genuinely envy your reserves of free time.

You realize you are old when the kids ask – what’s the YouTube or imgur link and you are still using film. …. Where do you get film these days anyways?

There. Fixed that for me.

Tried to reply two minutes after without exiting program and that was blocked! So don’t tell me that it’s just a matter of getting a cookie or the IPA known. It’s active censorship.

Attempt #13 on this! Seems the blocking be upped to okaying each comment!

There I go. You’d think a site that puts up a public comment box actually wants comments.

I do agree with most of your points , going into attack mode clearly isn’t the answer .. choose your battles wisely and when you see an opportunity take advantage of it , The story at hand is about Verizon.

Yours, on the other hand…

i doubt we want to.? pays much better not to.

Quick! Don’t say you hate Google or-
OH GOD NO!

Robo-Masnic has awoken! His fury shall rain down upon us like a drunken bus driver. HEAVE TO! Run to the hills my breathers. Take wing!

I’m a paladin of sorts, and Techdirt is just wrong! Target-rich environment for me, can’t find any merit in the writing or the obvious pro-corporate bias, let alone in piratey fanboys who only want to steal empty entertainments.

I’ve also said that this is a vice, like teasing feeble-minded barking rats.

In any case, don’t worry how I spend my time. Justify your own interest, smarty-pants.

And what a vice! Attempt #4 just to snark back at an AC! If I had any brains, I’d cut the cable literally!

Pro-corporate AND pro-pirate? How do you even think that’s possible?

Cognitive dissonance, not taking your meds and being paid to be shill is a good motivator.

His crumple-zones are full of paradoxes. Such as the benevolent capitalist.

You must be a bad shot! Even with so many ‘targets’, you can’t even hit one.

Just because you wear tinfoil armour doth not make you a paladin.

a paladin is either all good or all evil, guess which one is you

A Paladin is one of the 12 great legendary warriors of Charlemagne’s court.

The image of anything screwing New Jersey just put me off breakfast.

“…as evident by the fact they literally write the laws governing their behavior.

Corporations writing the laws that govern their own behavior

pretty much the working definition of fascism??