from the rats dept

Okay, damn it, fine, let’s talk about Harris Faulkner and her insane likeness rights lawsuit against Hasbro over a toy hamster. I’ve been avoiding this stupidity since September, when the lawsuit was filed, because how do you even broach a topic like a cable news anchor suing a toy company over a tiny little inanimate hamster? In any case, Harris Faulkner, an award winning Fox News anchor, sued Hasbro over its “Harris Faulkner” hamster, alleging that the toy not only shared her name, but was an appropriation of her “unique and valuable name and distinctive persona.” Her lawsuit, in fact, spends a great deal of time making sweet love to Faulkner’s awesomeness for reasons I can’t even begin to understand.

In her time at FNC, Faulkner has covered many major news stories. She has anchored key moments of FNC’s political coverage, including the 2013 government shutdown, the 2013 State of the Union Address, the 2012 vice presidential debate, and the 2012 election night. She has also reported on significant international news events, including the fall of Tripoli in 2011 and the death of North Korea’s Kim Jong-Il, as well as some of the most significant domestic news in recent memory, from the death of Whitney Houston, to the trial of George Zimmerman for killing Trayvon Martin, and the Emanuel A.M.E. Church shooting in Charleston, South Carolina.

Hopefully lawyers for Hasbro will be willing to stipulate that Harris Faulkner is indeed the cat’s pajamas. The problem is that, other than sharing the not-really-super-unique name Harris Faulkner, the tiny toy hamster doesn’t share any of the likenesses that Faulkner has alleged. 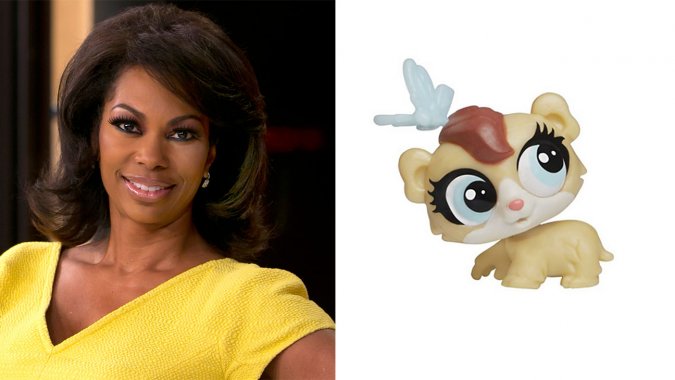 Yeah, one of them is a lovely looking woman news anchor and the other is a hamster. That, combined with the absurdity of the idea that Hasbro was somehow marketing toy hamsters to Fox News loving tots really should be all that’s necessary to understand how silly this all is. We don’t really need to write out a blow by blow explanation of how Faulkner and this toy hamster aren’t similar, do we? No, we don’t, because Hasbro chose to do it for us in their response.

Hasbro also asked the court to note that identical names aren’t enough on their own to cause a valid publicity rights violation, so this whole thing comes down to whether Faulkner and the hamster are similar in appearance. Which they aren’t. At all. As lovingly detailed above in one of the most absurdly awesome court rebuttals I’ve ever seen. However, Faulkner gets a chance to respond to Hasbro’s response, which at this point I sincerely hope she does, because I want to see what her legal team comes up with next.

the Hamster Toy is an inch-tall, cartoon-like plastic animal, which has no apparent gender…

I would have to disagree there. Look at those prominent eyelashes. By the rules of cartoon sexual dimorphism, this is very obviously a female hamster by that trait alone.

Having said that, I agree that she doesn’t actually look like the news anchor in question.

I dunno, they both look like a plastic rendering of a vaguely female form.

Wouldn’t that mean that Boy George is really a woman?

Where can I read those, silly bastard?

I heartily endorse her claim and think Hasbro should pay up.

But, see, for this to work, you actually have to appropriate my likeness or persona as well. As you are in no way even moderately funny, I feel as though I’m in no danger here….

But timmeh, “in no way even moderately funny” is to be imitate you.

Well, they are both pretty similar if you consider that they share a plastic empty-headed persona.

I totally agree with Dark Helmet. Otherwise anyone can pretend to be you. It’s just common decency, especially when the name is unique.

There are others out there who have the same name as I do. That doesn’t mean that they stole my name.

Giving toys or fictional characters names is little different from naming your newborn. There’s a good chance that someone out there will have the same name. In each case, lacking any other connection whatsoever, it means exactly NOTHING. There’s no grounds for the claim.

A quick search of my own name brings up a few other unique individuals called “Wendy Cockcroft.” How much more common is “Roger Strong?” Methinks Ms. Faulkner is making a mountain out of a molehill.

I totally agree with Dark Helmet. Otherwise anyone can pretend to be you. It’s just common decency, especially when the name is unique.

That is a hamster?

And it has more realistic hair.

Sorry, but you product design team didn’t bother to check the name or did and didn’t talk to the corporate attorneys before using it. No corp lawyer would approve the use of that name, knowing its Fox-y owner.

I think this is a blatant attempt to make money off her celebrity.

As such, I don’t think her likeness is that off base.

What’s next, a cute hamster named “Batman” with a mask and cape? “But it’s not a rich billionaire, it’s a hamster.”

How are they supposed to make money off her “celebrity”? She’s a news anchor.. No one in their target audience will have any clue who she is.

I’d bet they were either:
a) being lazy as designers, and just pulling from whatever was handy
or
b) hoping for stories like this one to create hype

Hasbro must pump something really interesting through their ventilation system…

Your batman example has a mask and cape. What’s the similarity in the case at hand? They both have two eyes? They’re both female? They’re both mammals? Other than the name, how is this toy Harris Faulkner and not any other female on the planet?

“make money off her celebrity”

Maybe, but her celebrity is pretty narrow. I’d never heard of her before this story, and neither had my friends.

Celebrity? Who the fuck is this woman? I have never heard of her until today so no, she is not a Celebrity.

She has no Copyright or trademark on her name, so it is available use by anyone. I have also found 3 others with the same name after 2 minutes searching on the internet, so its not unique.

Also Harris as a woman’s name I think all men named Harris should sue her for using a mans name. She has ruined a name that has been used for men for hundreds of years.

Those that think she is right to sue, well you need to go lie down in the middle of the road, as you are only useful as a speed bump.

Celebrity? Who the fuck is this woman? I have never heard of her until today…

Apparently, neither had 99% of the rest of us. We have now. Intentional Streisand? Can Hasbro counter-sue for providing promotional services?

The filing says she’s upset because her namesake is clearly marked as a “choking hazard”. Apparently, she feels that in real life no one is likely to choke on her.

If she was a man it might be seen as a compliment!

Fire the bimbo and hire the hamster.
The hamster is a heck of a lot cuter and I’s sure can
be a much better news anchor.

Really, dude? Couldn’t bother to read the previous comments to see I said it first?

And both your usernames start with ‘a’, so he’s clearly stealing your persona.

And you are both wrong, the hamster is overqualified.

I like how they listed stories she ?covered? as a news anchor in such a way that they actually leant veracity to her other statements regarding her feelz with regards to the naming of the toy. The way I see it, news anchors do not dig up dirt, they relay stuff dug up by others, and introduce people (though there are some exceptions to that). They other piece of relevant information is that she works for Fox, and therefore Rupert Murdoch, and if I can get past that information I am looking for what is lied about and which bits might actually be truth rather than salaciousness.

If the hamster becomes a paid mouthpiece then she will have a leg to stand on in court.

“Yeah, one of them is a lovely looking woman news anchor and the other is a hamster.”

the one on the left is the hamster, right?

This hard-to-swallow lawsuit over a choking hazard will end in a gag order.

Hence, in USA, we have four potentials with that name.

Both a FOX News anchor’s mouth and a hamster’s legs tend to run incessantly and furiously without getting anywhere.

LANHAM ACT
… White has raised a genuine issue of material fact concerning a likelihood of confusion as to her endorsement.
…

One of them is adorable looking…
The other isn’t.

“In her time at FNC, Faulkner has covered many major news stories. “
She has also had many multiple orgasms. Driven to enjoy pleasure she is a woman among women. That hamster can blow me…

Hasbro should have her lawyers pay for the lost time.

The liberal media is trying to brainwash us into believing that plastic hamsters aren’t real.

If they get the hamster on the stand and it’s revealed to be a hypersensitive, narcissistic princess, then they’ll have a case.

Harris Faulkner is a not-so-unique name?
Had you looked, I reckon it more rare than Elvis.

I beg to disagree.

One definitely has a hollow head that is full of air.

The other is a plastic hamster toy

I think you’re all ignoring the real issue here. Harris Faulkner is an awful name for a cute little hamster. If anything, the news anchor is only drawing attention to the fact that her cruel parents named a baby girl Harris, also not cute.

Sounds like the kind of Vocal Trigger Worlds the Russians would use for Sleeper Operatives in the USA; because of course, it would never be spoken in normal conversation…