Appeals Court Says US Government Cannot Deny Trademarks For Being 'Disparaging'
Techdirt Podcast Episode 55: How Much Surveillance Is Acceptable?

For much of the year Facebook has been under fire for trying to dress up its attempt to corner developing nation ad markets under the banner of selfless altruism. Facebook’s plan is relatively simple: through a program dubbed Free Basics, Facebook plans to offer developing markets a Zuckerburg-curated, walled garden version of the Internet, for free. Under Facebook’s vision of this program, Facebook becomes the axle around which online access (and therefore online advertising) spins for generations to come, with the tangential bonus of helping low-income communities get a taste of what online connectivity can offer.

But many critics have complained that such a model gives Facebook too much control. Partner companies quickly dropped out of the program, unhappy that Facebook got to decide which content was “zero rated” (exempted from wireless usage caps) and which wasn’t. Companies like Mozilla similarly argued that if Facebook was so keen on helping the poor, it should finance access to the actual internet. Others worried that having one company as a powerful gatekeeper not only poses problems for competition, innovation and speech, but helps create a central repository for subscriber data that would prove an irresistible target for hackers, governments, and oppressive regimes.

Facebook’s response to all of this criticism was to call these concerns extremist, and to imply that if you’re questioning Facebook’s motives, you’re hurting the poor.

The problem (for Facebook) is that as India spent much of the year trying to craft net neutrality rules, government regulators agreed with this criticism, suggesting that what Facebook was attempting was glorified collusion. This week, in a desperate attempt to sway the government toward Facebook’s AOL-esque vision, the company decided it would be a good idea to use Facebook users to automatically spam the Indian government. Users who logged in were greeted with a message that automatically sent a message to Indian regulators lamenting a “small group of vocal critics” trying to derail free Internet access: 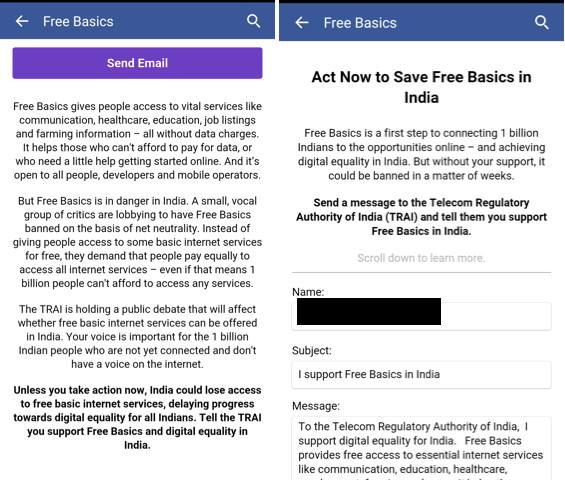 Of course that “small, vocal group of critics” is in reality quite large. And they’re not looking to ban free Internet access from a billion people, they’re just smart enough to realize that what developing nations need is real infrastructure connecting people to the actual Internet at lower prices, not a bastardized version of AOL. Facebook has consistently tried to argue that if you oppose its vision of a curated walled garden you’re a villain preventing the poor from being connected. But that’s nonsense, and it doesn’t void the reality that Free Basics is a potentially harmful idea, dressed up to look like Mister Rogers.

Curiously, several Indian Facebook users who’ve received this message claim that by simply scrolling down the notice, Facebook sends your message to the government without your tacit approval:

Got conned into signing the #FreeBasics petition on FB. DON'T "SCROLL DOWN TO LEARN MORE"! Signs you up immediately! pic.twitter.com/XqpyQSdUlN

Facebook also claims it “accidentally” spammed many users in the United States and the UK with the message, likely resulting in a few extra million “accidental” messages to Indian regulator Trai, which is busy fielding input from the public. You almost get the sense that Facebook’s getting a bit desperate when it comes to pitching its plan for global ad market domination unprecedented international love and caring.

Apple doesn’t need to BE evil…it’s business structure IS evil.
They murder chinese employees for ‘encouraging slacking off’.
They arrange for customer service staff to die in car accidents on the way home for ‘encouraging union formation’ etc etc.

Plus their products since Jobs died have gone utterly down the pan. Shitty build quality below the level of chinese knock-offs, and hidden spyware reporting your every move back to Cupertino.

No wonder you’re an anonymous coward.

Sociopath Mark Zuckerberg promoted Facebook via spam in its earliest days…and Facebook is still spamming everyone that it possibly can (mostly by “harvesting” the address books of unsuspecting users). This latest scam is merely the most recent is a very long line that dates back to the beginning — and there’s no possible that it’ll be the last.

Unfortunately, none of the biggest email operations have the courage to blacklist Facebook: they’re run by cowards who would rather tacitly support and enable spam instead of doing everything possible to block it. So in all likelihood, this latest spam run will reach its victims and overrun their mailboxes — hopefully triggering a well-deserved backlash against Facebook, but that’s TBD.

You know, as someone who used AOL for many years as a kid, I’d have to say there’s no comparison between Facebook’s plan, and AOL. Yeah AOL was interested in keeping you looking at their own content and such. However, I never had any issue simply typing a url into the address bar, and getting a site that wasn’t AOL’s content. Hell, they even gave you a built in Usenet reader that was serviceable enough. And it was possible to simply minimize AOL’s browser once you were logged in, and use a different browser instead. The charges were all the same, no matter what you looked at, the only variable being amount of time spent connected.

The automatic spam can only be triggered if you enable Javascript for Facebook. Cautious users block Javascript wherever possible. So, to all the would-be web developers out there: the next time you think “Hey, I should make this page be totally broken if the user dares to disable Javascript”, know that you part of the problem.

ii) I feel your pain and couldn’t agree more. Devs, if you must use javascript, please – at least – make your sites navigable without it.

Affiliates of GOOGL, FB, and ADBE all anonymously track you. They are all part of the problem. FOXA, as well. They track me at least 8 times/day. Probably more…

Others worried that having one company as a powerful gatekeeper not only poses problems for competition, innovation and speech, but helps create a central repository for subscriber data that would prove an irresistible target for hackers, governments, and oppressive regimes.

Comcast, we’re looking at you.

Remember when Zuckerburg recently said that he is going to give away 99% of his Facebook shares to charity? It turns out that “charity” is himself. He plan is to move the money from one pocket to another and call it a charitable donation.

As a citizen of a developing nation to me this entire thing is just too many lobbyists on both sides spewing complete rubbish and this is the proverbial storm in a teacup.

Firstly Facebook is full of it because the market this will target is the internet on mobile networks which are pretty much everywhere it’s even slightly feasible already. No matter what they claim Facebook are not going to magically cause a cell tower to be installed in some obscure remote village with no power or other infrastructure. (Old joke: The market penetration of the internet exceeds the “market penetration” of safe drinking water.)

Everywhere else it will be like the free Whatsapp services that some cell companies already offer as a way to steal market share from their competitors. The consumer likes it because it seems cheaper but otherwise NOTHING actually changes. The “Free Facebook” advert is only attractive if you are already on Facebook. The market we are talking about here is not sophisticated enough to understand which internet address is free and which one isn’t but they are VERY capable of protesting loudly and very publicly if Facebook ever block access to other sites (Google, twitter etc.). In any case the carriers would want any extra revenue they might get. So while this will probably help Facebook somewhat they are dreaming if they think it will get them some monopoly on the Internet.

Aol and Blackberry have both tried similar schemes in the past and it didn’t work then. Why would it now?

Finally I kind of doubt that any Governments will block this anyway, there is just too much chance of their opponents spinning it. But of course the lobbyists on both sides are busy trying really hard to scare their customers to fork out large amounts of money to make sure the other side doesn’t win.

Time to write an IP-over-Facebook plugin for my phone.

In the last line of the article, are you sure the strike-outs are in the correct group of words. I would assume they belong on the trailing group of words.

There’s really no point in arguing since Facebook employees live in their own filter bubble where there acts are not only right, but righteous.

Expect a future where Facebook, which I consider the modern AOL.They are indexed and used as targets for finding specific information.For certain searches that never come up with regular searches using Google.com