Another day, another story of abusing trademark law to try to silence speech. Paul Levy has the story of how the city of Mesa, Arizona, has sent a ridiculous cease and desist letter to Jeremy Whittaker, who is running for city council. Apparently, his opponent in the election is the preferred choice of many current city officials, suggesting that they don’t really appreciate Whittaker’s candidacy. But the city took things a ridiculous step too far in sending that cease and desist, arguing that Whittaker’s campaign signs violate the city’s trademark on its logo. 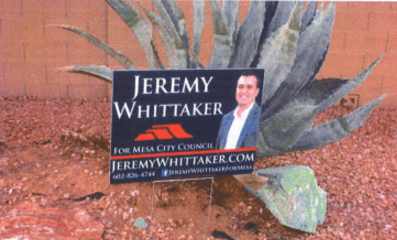 And yes, that is a version of the Mesa city logo that he’s using:

But to claim this is “trademark infringement”? That’s crazy.

Thankfully, Levy is on the case and understands all the many reasons the threat is completely bogus:

There are several reasons why this demand is wrong — Whittaker is making a purely noncommercial use of the logo which is therefore outside the scope of the Lanham Act and, indeed, protected by the First Amendment, and, in any event, nothing about his material suggests that the city is behind his campaign.  Beyond that, the logo is used to identify the city as the subject of his campaign for office, which is fair use.

And then there is this lurking problem: section 2(b) of the Lanham Act forbids the registration of any “flag or coat of arms or other insignia of . . . any State or municipality” as a trademark.  The Trademark Office has apparently been using a narrow construction of this statutory limitation to allow agencies to register logos to identify specific government services or programs.  A couple of years ago, a federal judge in New Jersey expressed grave reservations about the very idea of a government trademark in its own seal.

The lawyer who sent the demand letter is the same one who submitted the trademark registration a few years ago, claiming that it was only for limited specific programs and services.  At the same time, the city’s publicist was describing the graphic as “a new logo to replace the stylized ‘M’ that has branded the city for a generation.”    By identifying the symbol at issue as the city’s official insignia, its lawyer might have unwittingly put his client’s trademark registration at risk.

And, on top of that, Levy has sent a response letter to Mesa’s lawyers raising these issues. As with pretty much any letter Levy sends, this one is worth reading. Here’s part of it:

First, your effort to invoke the trademark laws to limit noncommercial political expression
is barred by the Ninth Circuit’s decision in Bosley Medical Institute v. Kremer, 403 F.3d 672 (9th
Cir. 2005). That case involved the use of the plaintiff trademark as the domain name for an
Internet “gripe site” in which Michael Kremer was criticizing the plaintiff company. The district
court dismissed Bosley’s claims for trademark infringement and dilution, and the court of appeals
affirmed because “trademark infringement law prevents only unauthorized uses of a trademark in
connection with a commercial transaction in which the trademark is being used to confuse potential
consumers.” … Like Kremer, Whittaker is not using the City’s various
logos to sell any goods or services, but only to identify the government body whose policies and
operation he hopes to improve by being elected to public office. Consequently, “[Mesa] cannot use
the Lanham Act either as a shield from [Whittaker]’s criticism, or as a sword to shut [Whittaker]
up.” ….

Second, even if your client could show a commercial use of its marks, Whittaker has
employed the marks to identify the subjects of his commentary, and is thus protected by the doctrine
of nominative fair use, which has been recognized by the Ninth Circuit since New Kids on the Block
v. News America Publishing, 971 F.2d 302 (9th Cir. 1992). Whittaker cannot meaningfully identify
his candidacy without making clear that it is for the Mesa City Council that he is running, just as the
artist whom Mattel sued for his parody of the Barbie doll had to use her likeness to make the point
of his parody clear. See Mattel v. Walking Mountain, 353 F.3d 792 (9th Cir. 2003). The city’s
success in letting its logo stand in as a shorthand for the city provides as well the necessity to use the
logo so that members of the public driving by his lawn signs or seeing his campaign literature
understand at a glance that he is a candidate for office in their city.

Third, your letter asserts that the placement of the city’s logos on campaign material “falsely
encourag[es] a public belief that [Whittaker is] endorsed by the City of Mesa.” We see no likelihood
of confusion, and the fact (recited in your demand letter) that some “other candidates” have
complained about the use of the logo does not show any likelihood of confusion about source or
sponsorship. It is, indeed, regrettable that your letter shows so little confidence in the intelligence
of your client’s constituents. The citizens of Mesa are surely used to the fact that there are periodic
elections for city offices and that, even if some candidates are supported by the incumbent officials
who employ you and support Whittaker’s electoral adversary (and who, indeed, are displayed on that
candidate’s web site wearing lapel pins bearing the city logo), candidates are not sponsored or
endorsed by the city government itself.

And, of course, Levy also points out the possible problems with the trademark itself, which the city of Mesa might want to take note of:

But there is one more important reason why your client should withdraw its claims: litigating
the claims could result in the cancellation of your client’s trademark. In my letter so far, I have
indulged the assumption that your client has consistently made, and on which your letter rests: that
the three-tier logo is effectively Mesa’s city insignia. But your demand letter performs a clever
sleight of hand–you say that you are writing on behalf of the “City of Mesa Municipal Development
Corporation,” which you say will be referenced as “City of Mesa”; then you go on to talk about how
the logo belongs to the City of Mesa. But it does not, and it cannot. Section 2(b) of the Lanham Act,
15 U.S.C. § 1052(b), provides that no mark may be registered if it “consists of or comprises the flag
or coat of arms or other insignia of . . . any State or municipality.” That is no doubt why, instead of
seeking to register the three-tier logo on behalf of the City of Mesa as a city insignia, you secured
Registration No. 4,073,776 as counsel for the City of Mesa Municipal Development Corporation,
and only for such specialized services as construction planning, library services, utility services and
the like. You made no claim that this would be a mark for political campaign purposes, and no claim
that it would be a general city logo. Yet the repeated contentions by Mikkelsen and Smith, and
indeed by your own letter, that this is the city’s logo, are flatly inconsistent with the limited purposes
for which this logo was registered. If we have to litigate this case, the record will only draw public
attention to how your client is trying to expand the rights conferred by the federal registration beyond
what the Lanham Act allows, and, indeed, in a manner that runs afoul of the First Amendment.
“Trademark law is not properly employed to stifle discussion.” Renna v. Cly. of Union, NJ, 88 F.
Supp. 3d 310, 322 (D.N.J. 2014)

Indeed, I suggest you pay careful attention to the Renna decision, which discusses the reasons
why First Amendment limits on govemment’s right to suppress speech about itself make trademark
rights inappropriate for municipal insignia, whether asserted as registered rights or unregistered
rights.

Believe it or not, the letter goes on to twist the screws even more tightly. One hopes the city of Mesa and its attorneys get the message and rethink their decision.

One hopes the city of Mesa and its attorneys get the message and rethink their decision.

A more important question, can any court action be completed before the election, as otherwise this is useful harassment. That is the biggest abuse of the legal system, short term harassment for political or commercial advantage.

This is a good point.

A trademark need not be enforced against one in order to file a challenge against it with USTPO, no? In other words, anyone can ask USTPO to invalidate this?

political crimes, my how those that claim to support freedom and justice for all have fallen

Oh. The lawyers are thinking only one thing. Ka Ching… Drag it out and make a boat load of money.

One hopes the city of Mesa and its attorneys get the message and rethink their decision.

Why should they? The lawsuit’s result may be doomed but it’s still worth its money: “Who do you want to elect? Your well-reputed incumbent or someone on the receiving end of a lawsuit because he wants to continue misappropriating your city’s intellectual property for his own agenda?”

Certainly protected speech and not stating anything factually wrong. Yes, they’ll go up in flames eventually but by that time election will be over and they will have harvested votes on their action, and maybe enough to make a difference.

Likely a better return of investment than other campaign measures since the court of public opinion is a lot easier to manipulate than a court of law.

I’d like to see this candidate win the election if for no other reason that to thumb his nose at this lawyer and the rest of the city counsel members.

My advice to the city is don’t bring a patent lawyer to a trademark dispute; it’s like bringing a knife to a gunfight. I’m waiting for the city response.

So because Levy is good at his job we probably won’t get to see a municipality slapped around for stupidity.

Course it will save tax payers money but sang I want to see a train wreck in slow motion.

Ahhh, Mesa, a city I lived and worked in and remember not so fondly. This really doesn’t surprise me considering politics down there and a general disrespect for the law by those in power.

I feel like Paul Levy should include a bottle of Astroglide with each letter so the recipient knows they are about to get fucked.