Despite Gigabit Hype, Comcast Is Facing Less Broadband Competition Than Ever

Despite the rise of heavily-hyped-but-highly-scattered gigabit deployments, the broadband industry is actually seeing less competition than ever before across huge swaths of the country. Once upon a time, broadband “competition” consisted of an equally matched telco going head to head with the incumbent cable provider (if you were lucky). These days, most phone companies lack the finances or competitive motivation to improve lagging DSL speeds across their footprints — speeds that don’t even meet the FCC’s base definition of broadband (25 mbps). 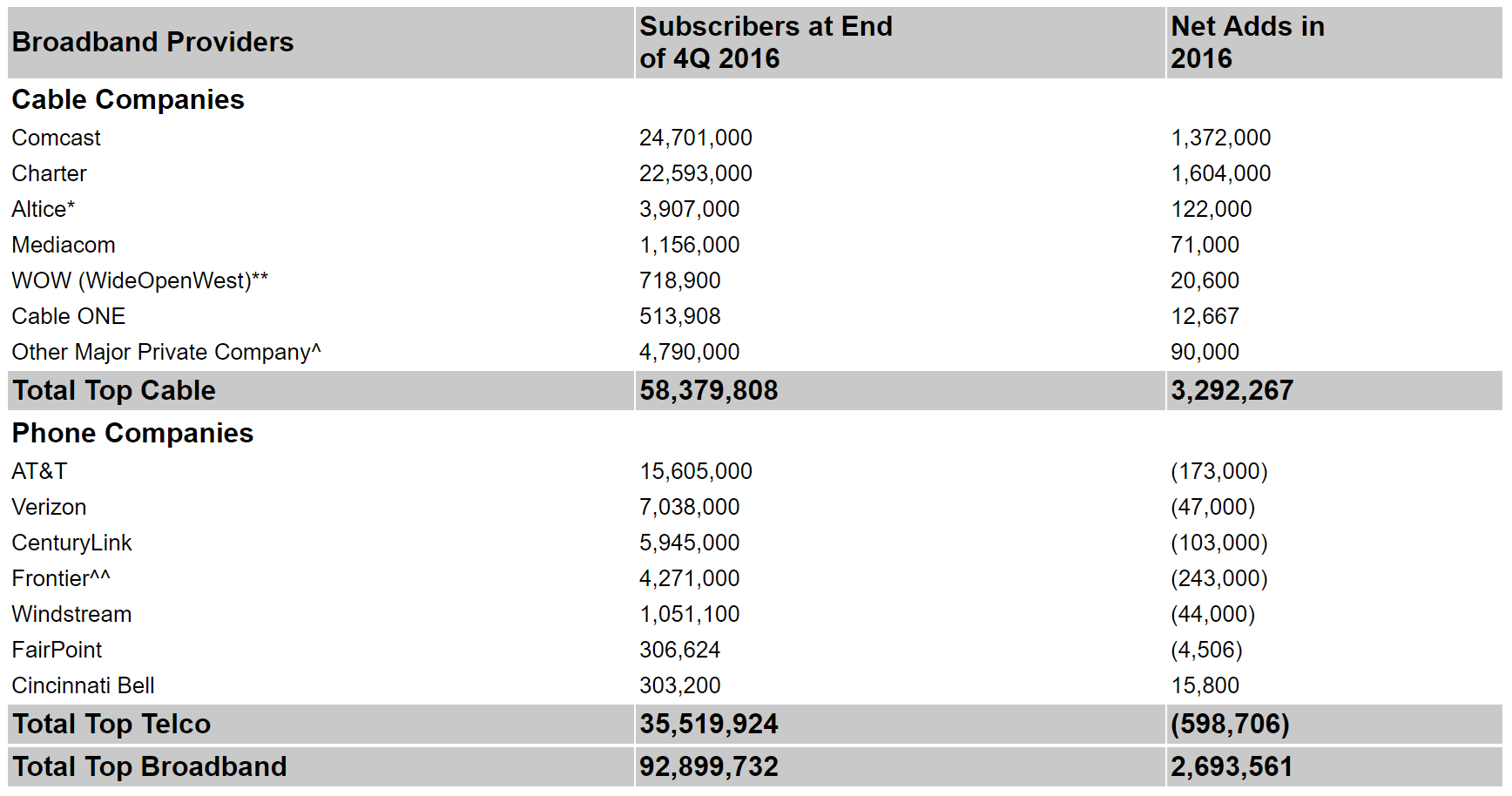 In countless markets, phone companies like AT&T and Verizon are simply giving up on unwanted DSL users, quite happily driving them to cable via the one-two punch of price hikes or apathy (their focus now is more expensive wireless, and gobbling up various media companies). Elsewhere, smaller telcos (Windstream, Centurylink, Frontier) have saddled themselves with so much debt by gobbling up AT&T and Verizon’s aging copper customers, they’re incapable (or unwilling) to invest in necessary broadband upgrades en masse.

Many of these companies quite simply don’t even want to be in the residential broadband business, resulting in a palpable, active disdain by many of these phone companies for their own paying customers. The residential broadband industry simply isn’t profitable enough, quickly enough for modern investors, so most of these companies have shifted their entire focus elsewhere. For smaller telcos like Windstream, it’s gobbling up companies like Earthlink to expand a focus on enterprise customers. For AT&T and Verizon, it’s gobbling up media empires in the quest to be millennial ad juggernauts.

All of this is wonderful news for companies like Charter and Comcast. This reduction in overall competition is eroding the resistance to the rise of completely unnecessary and arbitrary usage caps, meaning broadband (and competing streaming) services are getting more expensive than ever before. And remember, most of these companies have written and successfully lobbied for state bills preventing your town or city from doing much about it. As icing on the cable cake, new Ajit Pai-run FCC has made it clear that nibbling these companies’ earlobes is going to pass for regulatory policy for the foreseeable future.

All of this tends to get overshadowed each time an ISP proudly announces the expansion of expensive gigabit broadband lines in highly-selective areas. But for the countless markets in the States, phone companies have effectively given up — resigning consumers to at least a decade of higher prices and the cable industry’s particular knack for atrocious customer service.

Comments on “Despite Gigabit Hype, Comcast Is Facing Less Broadband Competition Than Ever”

If cable companies had really gained 2.7M subs and telcos really lost 600K subs then we’d have to scratch our collective heads as to where the United States, with 124M households all of a sudden found 2.1M of them to hook up to cable.

Data analysis suggests several things, but I’ll save you my own analysis and suggest that the sources are lying.

No, three million people did not leave telcos and go sign up with cable last year. That’s 3% of US households and that kind of a monumental shift absent aliens landing is so beyond likely it’s not funny.

What, cable companies gaming the system and lying about stats to pretend there’s no cord-cutting?

The moment laws are tweaked to foster competition by strictly permitting new entrants to use public networks, easily deal with utility poles, let the Governments pursue municipal/public networks if their constituents so wish, enforce net neutrality principles…. etc, this will be solved. Don’t expect evolution in the next 4 years at best. Forever at worst.

I expected to see Cox and Time Warner cable on that list. Is there a reason why they went missing?

Time Warner Cable was bought or taken over by Charter

How does AT&T plan on delivering their content, pay Comcast to do it for them?

Charge a steep premium for their undergrade wireless service. And data caps.

AT&T subscribers can get their content via Netflix, Hulu, etc…

I got a tech support person just the other weekend to explain why Charter’s support for consumer IPv6 has gotten worse while saying the opposite. They’re struggling to get their systems straight after buying TWC and Bright House, which apparently have implementations rolled out for their users, and pretty much indefinitely postponed their non-business roll out of IPv6 (so far they just update their FAQ page every quarter to say it’s happening that quarter…)

In another life we had an ISP that had IPv6 working for years. We bought Internet transit service from [unnamed national cable company] and asked for IPv6 transit. They said they could provide us a tunnel but not native IPv6 but one day they’d get it.

We offered to consult for them [at their rates] and they declined. The problem wasn’t that they COULDN’T or DIDN’T KNOW HOW… the problem was that they had no DESIRE to provide IPv6 and their resources were all being spent to a)fix up the copper plant, and b)build up the fiber plant, and c)pay executives more.

Nobody with spending power wanted to setup, provide, or fix IPv6.

and no one will do a damn thing about it particularly due to the amount $ being thrown at politicians to keep them quiet!!

And that’s how the French and Russian revolution began

And gave those countries Napoleon and Stalin?

They exploited it to their own selfish desires.

What I find interesting in this story is that you seem to have a good fundamental grasp of what is going on, and then suddenly you leap to a conclusion (same one as always) that it’s a lack of competition that is driving the problem.

“These days, most phone companies lack the finances or competitive motivation to improve lagging DSL speeds across their footprints”

Finances is the key word here. They money required to make the investment to widely offer one or two steps up in broadband speed (say from 10 to 100, or 10 to 1000 meg) is significant. It’s not pocket change. In many cases, it would require a wholesale rewriting of their networks to handle it.

If you don’t think it’s expensive, consider Google Fiber. They cherry picked neighborhoods, wired only where they had enough pre-orders, and still absolutely and utter lost their asses on trying to offer high speed internet. While the actual results are a company secret (odd for a public company, really), the category under which the fiber product was operating lost many times past it’s revenue. The most damning evidence is that Google stopped laying fiber.

Google is a cash rich company, socking away billions a year of free cash. It only took them about 24 months to realize that rolling out fiber internet in the US is shoveling money down a pit, even with the potential of increased eyeballs on their search and ad products. Unless they can find a method to connect new subscribers that is significantly cheaper than laying fiber, then they are out of the game, operating only what they have currently installed or purchased and doing nothing more.

The only places any company will make the investment is where they feel they will get a return on it. With the retail prices (per meg) of residential internet dropping, the incentive has pretty much gone away. Remember, residential phone service does not require fiber to run, it requires a barely function twisted pair of copper, and that’s it.

Cable companies have fared slightly better in all of this in part because every network upgrade they make is beneficial to all of their productions. Being able to deliver better picture and sound in the cable packages, being able to deliver more individual on demand streams and more pay per view channels helps to pay for the infrastructure investment. DOCSIS 3.0 (and 3.1) supports pretty high internet speeds (if you bind together enough channels), so most cable companies can offer a 100 meg connection without the price going completely off the hook. Phone companies have to make some pretty big investments to get there.

Competition would work and would be the correct answer if the costs were not there. Few companies (if any) are willing to come cold into a new territory, sling massive amounts of fiber, and then hope to get some clients. Google tried and clearly failed, even after dropping their pants price wise to get market share.

So perhaps rather then focusing on the lack of competition, you might consider looking at the incredible costs involved in actually running fiber and maintaining it in the US. That might make for a better story (but one that doesn’t come to your anti-competitive conclusion).

We signed up in late August and were told we should see it “late November, no later than Christmas”. Late Feb the contractor came through doing their micro trenching (really cool technology, actually) and I’ve now been told “mid April. Maybe. For sure by Mother’s Day. I think.” But at least Austin has some serious competition.

Right now both T-W (ooops, Spectrum) and AT&T are still stuck with copper to the house, so 100 looks like their peak. Google is almost giving out 100.

The latest chatter on the Techdirt Insider Discord channel...