Stupid Patent Of The Month: Ford Patents A Windshield

The Supreme Court?s recent decision in Impression Products v. Lexmark International was a big win for individuals? right to repair and modify the products they own. While we?re delighted by this decision, we expect manufacturers to attempt other methods of controlling the market for resale and repair. That?s one reason we?re giving this month?s Stupid Patent of the Month award to Ford?s patent on a vehicle windshield design. 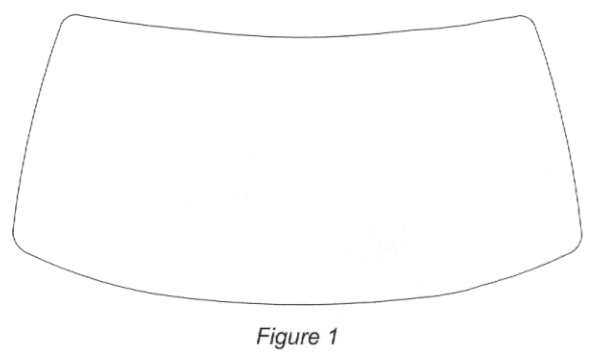 D786,157 is a design patent assigned to a subsidiary of Ford Motor Company. While utility patents are issued for new and useful inventions, design patents cover non-functional, ornamental aspects of a product.

Unlike utility patents, design patents have only one claim and usually have little or no written description. The patent only covers the non-functional design of a certain product. But design and utility patents are alike in an important way: both are intended to reward novelty. According to U.S. law, the Patent Office should issue design patents only for sufficiently new and original designs. By that test alone, it?s easy to see that the windshield patent should never have been issued.

Why did Ford apply for the patent on its windshield design? One possible reason is that it?s the automotive industry?s latest attempt to control the market for repair. If the shape of your windshield is patented by Ford, then no one else can replace it without risking costly patent litigation.

Ford has a troublesome history with independent repair shops: in 2015, it sued the manufacturer of an independent diagnostics tool under Section 1201 of the Digital Millennium Copyright Act, the infamous law that makes it illegal to circumvent digital locks on products you own. Later in 2015, the Librarian of Congress granted an exception to 1201 for some forms of auto repair, but manufacturers have continued to seek out creative ways to close out the market, whether it?s through copyright, contract clauses, or patents.

In the Supreme Court Lexmark opinion, Justice John Roberts specifically noted the danger of automobile manufacturers shutting out competition in the repair space:

Take a shop that restores and sells used cars. The business works because the shop can rest assured that, so long as those bringing in the cars own them, the shop is free to repair and resell those vehicles. That smooth flow of commerce would sputter if companies that make the thousands of parts that go into a vehicle could keep their patent rights after the first sale. Those companies might, for instance, restrict resale rights and sue the shop owner for patent infringement. And even if they refrained from imposing such restrictions, the very threat of patent liability would force the shop to invest in efforts to protect itself from hidden lawsuits.

If the Patent Office continues to issue stupid design patents like Ford’s windshield patent, it risks giving manufacturers carte blanche to decide who can repair their products. And customers will pay the price.

Republished from the EFF’s Stupid Patent of the Month series.

Comments on “Stupid Patent Of The Month: Ford Patents A Windshield”

Looks suspiciously similar to the shape of the windshield of the 1999 Subaru Legacy wagon I owned. This should be easy to invalidate as an obvious and non-novel alteration of extensive prior art.

Furthermore, arguably, the shape is functional, not ornamental: it is shaped to fit in the hole at the front of the passenger compartment.

But… but… without a patent Ford would have had no motivation to invent a slightly different shape of a windshield to install in their cars!

We have to reward them with a vague patent that applies to all windshields made in the last century, otherwise no one will have any motivation to innovate anymore!

With a possible exception of a unique printed pattern along the edge or behind the rear view mirror, I have a hard time seeing how it’d be possible to come up with any novel geometry or design for a windshield

It’s one way big companies get bad patents – they simply keep filing them until the USPTO is so sick of seeing it over and over that they finally just rubber-stamp it.

Ugh… So the squeaky wheel gets the grease. I’m sure they have to pay a fee each time too, so they’re essentially buying their bad patent at whatever the cost.

What I find amazing is that four people are credited with this ‘invention’! Damn, imagine what they could do if they had real jobs.

They’d work at Apple and sue others because of round corners.

“Why did Ford apply for the patent on its windshield design? One possible reason is that it?s the automotive industry?s latest attempt to control the market for repair. If the shape of your windshield is patented by Ford, then no one else can replace it without risking costly patent litigation.”

Design patents on simple auto parts is commonplace and this is nothing new. It’s why you pay high prices on so called authentic Honda or Lexus parts. They’re trying to control the product, not the repair market.

The design patent only protects the EXACT design. So draw in some simple lines on the base of that windshield and you can manufacture a near duplicate.

The design patent allows the ‘authentic part’ to be differentiated from the knock-off. Also you can get a design patent on just about anything (I HIGHLY SUGGEST YOU TRY IT! IT’s cheap for a micro-entity and you’ll amaze your friends.) Validity is not a big concern in the design patent world. Sue someone and you may very well quickly lose your patent.

Only a factory set up to manufacture ford windshields need fear anything here.

The design patent won’t prevent you from replacing your windshield with a close copy. This is not a method patent for the replacement of a windshields.

Before 2005 when Ford came along and invented the windshield, driving was really risky, because there was no way to see in front of the car. Windshields sound so obvious now, but back in 2005, Ford’s windshield design team was doing ground breaking work, so that we can all enjoy the privilege we take for granted of being able to see the road while we’re texting. Not all heroes wear capes…

Nowadays, only dogs stick their heads out of the side windows and get plastered with bugs. Progress is an amazing thing. People forget.

Did someone not just recently mention windshields as an hilariously ludicrous example?

Taken without context or explanation, it seems like an odd patent. There doesn’t seem to be very much here to work with.

However, Ford has a number of other windshield related patents (including a European one for a fast defogging one). It’s not clear if (as an example) this design patent is part of a larger product rather than just a nonsense patent.

Thankfully, EFF has no interest in digging at all, and didn’t seem interested to make any investigation beyond pointing their fingers and laughing. Without context, it does look odd. With context, we may not be chuckling so hard.

Why does Techdirt let Leigh make me sound so stupid?

Is the real issue, this is just a symptom and one of the more obvious ploys.

Today, I discovered that I needed an “ignitor” for my 20 hp two cylinder lawn tractor. $271 ->everywhere<- as if by magic everyone decided on the same price without any collusion.

So, being an engineer, I cut open the box to look inside.
4 transistors, one IC that looks like an old Japanese style opamp, and some discretes. Maybe 10 bucks worth of stuff including the not-watertight box (why I need one now).
It just uses a couple pickup coils on the flywheel to decide when to drive spark coils for the cylinders. Not CDI or anything fancy.

Not even the John Deer or other companies (the auto guys) but kawasaki/briggs&stratton in this case, and they don’t care if I do the work as long as they get that 27x markup.
Because, of course, there are no numbers on anything and no schematics available at all.

Suppose I want a Bullet Proof Windshield on my Ford? This patent is BS. I can see how and why the Auto Manufacturers want freeze out repair shops. They want us all to be forced to go to dealerships for repairs and be forced to deal with ridiculous prices, shoddy service, and pointless lock in. Ford especially would like to recoup losses in their stock price. Look for the new CEO to try this nonsense with more parts. As one who’s spent far too much time and money at Ford Dealerships, I’ve never had a positive experience at a Ford Dealership. Other repair shops? DEFINITELY.