from the beck-and-call dept

For years now, we’ve pointed out that ICE — Immigration and Customs Enforcement — has this weird habit of acting as the private police force of various big sporting leagues, almost always timed to big sporting events. Every year, right before the Super Bowl, for example, ICE seizes a bunch of websites. And ICE also goes way overboard in seizing physical merchandise, even if that’s at least slightly closer to its mission. But it’s been painfully obvious that ICE more or less sees itself as an arm of these sports leagues, rather than employees of the US government, and thus, the public. Last year, I filed some FOIA requests about ICE seizures leading up to the Super Bowl, but had them rejected on the basis that it was an ongoing investigation.

However, law professor Rebecca Tushnet is much more persistent than I am, and has been pursuing documents related to ICE seizures in the courts, and has had the court force ICE to hand over details — including the not-at-all surprising, but still horrifying discovery that the NFL gives ICE guidance on what to seize, and it includes obvious parodies which are clearly not infringing, as they’re protected by fair use. This is from the manual that the NFL provided ICE: 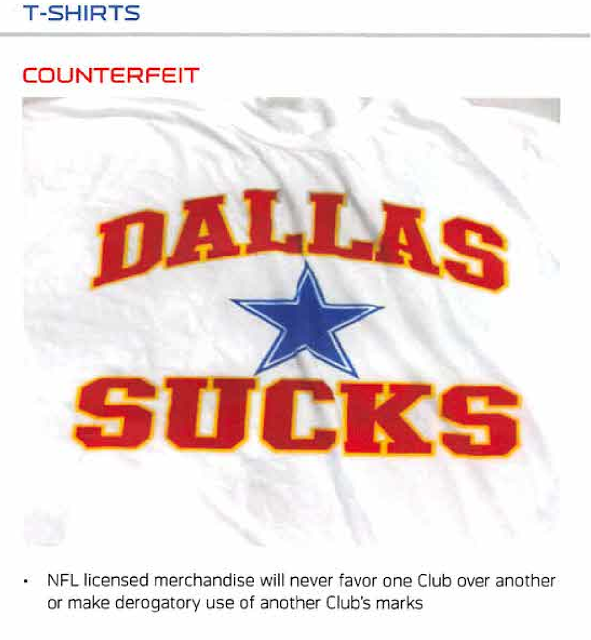 And, sure, perhaps it’s true that NFL licensed merchandise won’t favor one club over or another or make derogatory use of another’s marks… but it’s easy to argue that this is parody and thus not infringing. Just because it’s not licensed, doesn’t automatically make it infringing. But the NFL doesn’t care. And I guess that’s not surprising that the NFL doesn’t care — but it’s astounding that ICE just agrees to follow the NFL’s marching orders. Because unlike the NFL, ICE should actually follow what the law says, and not what a very wealthy sports league wants to happen.

As Tushnet points out in response to this:

So, what do we know? (1) Despite ICE’s initial claims to me via its spokesperson and a lawyer, ICE relies only on industry guides to identify counterfeits, not on any independent sources. (2) Those industry guides identify what they don’t like, not what is within the scope of counterfeit goods. (3) Most of what ICE seizes is truly counterfeit, but when it seizes parody merchandise, it implicates First Amendment interests in free speech.

Considering that this is ICE, who has a history of seizing blogs based on big industry claims, it seems quite clear that ICE couldn’t care much less about the First Amendment interests of the public. Just the profits of big industry.

Comments on “NFL Tells ICE That Parody Shirts Are Counterfeits”

And, sure, perhaps it’s true that NFL licensed merchandise won’t favor one club over or another or make derogatory use of another’s marks…

It’s not doing either. There’s no "other club" mentioned at all, so nobody’s being favored (the author might believe they all suck). It’s making a derogatory use of a club’s marks, but not another club’s.

Its a pity there is no one in washington working for us.

You just have to figure out how to create a regular person cartel. Or just say screw it and start over since the special interest government has been reanimated and has taken over the identity of the land of the free.

As long as you “think” that the political parties have ya by the balls they do.

Like Obama says… “you get the politicians you deserve”…

That would be true if there were politicians whose actions matched their words … but that has not and will not happen – ever. If any politician espouses opinions that you agree with … and if said politician wins the election, they soon forget all about the little people and spend all their time trying to get re-elected and filling their pockets rather than what they are supposed to be doing.

So, exactly how am I getting the politicians I deserve? I voted for the other persons … not that they would be doing a better job at the moment but they might not be actively trying to start another friggin war.

It’s not too hard to do. Create a company that has offices somewhere that is signatory to a treaty with the US that has an ISDS provision, and then ‘hire’ people as unpaid interns, that buy into the company with one share of non-voting stock, and pay a lawsuit insurance fee into the company coffers each month.

If any of them are mistreated by law enforcement or other government agency in the US, the company files an ISDS complaint on the grounds that corporate bylaws require that the company defend shareholders, and that defense is costing the company the profits it would normally have, but has to spend on legal measures such as the ISDS filing.

Wow. Talk about malicious compliance with the rules. Isn’t a large part of the trade agreements though focused on what you are allowed to use ISDS for and what you are not? I would think they would include language to limit its use only for the cartels against governments.

what ya gonna do about it

NOTHING cause your all too weak to try

For contrast, I’d remove the special laws that grant the NFL a LEGALIZED MONOPOLY, and shut down the whole schmear. — Because I’m a real libertarian.

Not Masnick. He has NO objection to the NFL controlling tens of billions of sheer profit on useless "sport" and still getting government subsidies to build sports stadiums — which amounts to outright fascism, only carps about what he views as too-zealous use of its monopoly in prohbiting some T-shirts.

Sheesh. Shows clearly how the range of debate is always stifled by the born rich nothing can be fundamentally wrong with a system that lands them at the top.

You keep referring the the NFL as a business. They have 501(c)(3) status: that means they are classified as a not for profit entity and do not pay income taxes on all of their bottom line.

They are freaking scam artists.

Who are you trying to reply to?

Anyone may still start another sports team or league. I would also point out that, in the way most libertarians seem to envision markets, all monopolies are legal. (And you know the markets will always tend toward a monopoly or oligopoly.)

If you want to fight locally everywhere to stop counties and cities from subsidizing stadiums and all the extra police presence, or argue that corporations should be limited in extent and time for a singular purpose, I’m all for that.

Not sure where you get your ideas about what Mike personally believes about particular things. As far as i have been able to tell, he is all for limiting the powers of some of these creatures.

Not sure how any of the above is fascism, although the way many corp/gov interactions go, it has an element of reverse fascism to it.

I don’t see how any debate is stifled, but everyone who opens up like you do generally gets a pass from much of the commentariat. But you do perhaps seem to subscribe to a form of libertarianism, which i have seen before, but not frequently at all, with which i find some common ground.

Maybe if you un-stifle yourself and engage a bit more constructively, others would join whatever discussion you might wish to have.

I would love to live in the bubble you seem to enjoy.
The monopolies people are complaining about are billion dollar plus a year businesses that are effectively state actors and or state sponsored. They ignore rules about lobbying, job offers and seemingly every other obstacle placed in the way of stiffing monopolies killing off innovation and jobs.

Take a broad look at what is being discussed and stop making straw man arguments that fit your agenda.

Quit complaining and start your own blog, you lazy ass.

Only complaining about the shirts? TD’s done stories shaming the NFL for a myriad of copyright abuse. Like how advertisers can’t refer to the Super Bowl as the “Super Bowl” but need to use euphemisms (and the NFL even tries to exert control over those euphemisms). Or the NFL’s social media policy that prevents their own teams from being able to post clips of their plays in a game.

There’s more if you search under the NFL company tag on TD.

“special laws that grant the NFL a LEGALIZED MONOPOLY”

What are these laws?

Also, aren’t they exempt from the anti trust laws?
Not sure why this is other than crony bullshitism.

The people at the top make all the rules so they’re going to stay right where they are.

Why should ICE care? American Tax Dollars pay for any wrongdoing and lawsuits. And the government agents, are almost never punished for their illegal actions.

US tax dollars pay for lots of wrongdoing, not as a side effect, but as the main purpose.

As you correctly state re the photo, “…easy to argue that this is a parody…” What is harder, of course, is to prevail with such a weak argument that the illustrated article is within the definition of a parody as that term is typically defined and applied by our courts.

I prefer the Canadian Football League’s attitude towards shirts, though…

My guess is that the NFL will find that tigers in the wild are sporting unlicensed replicas of the famous Bengal Stripes.

ICE will be ordered to confiscate all tigers world wide. But, ICE can’t do that since most tigers live outside of the U.S.

Then, someone will point out that tigers have been known to indiscriminately attack humans (mostly Africans and Asian subcontinent dwellers) and are thus classified as terrorists.

That will open the full force of the U.S. government to wipe out these terrorist pirates for copying Bengal stripes without being properly licensed.

ICE will be ordered to confiscate all tigers world wide. But, ICE can’t do that since most tigers live outside of the U.S.

I don’t think the NFL has anything to worry about. I have a whole yard stacked with rocks that repel tigers. Since I stacked them there, I haven’t seen any tigers around…

Really, really basic question: If the shirts aren’t offshore imports (and I certainly don’t know either way in this case), why would Customs… Immigration and Customs Enforcement… have any jurisdiction to even ponder the licensed-vs-parody question? Their the "import police"; there’s no plausible domestic infringement assignment for ICE, as far as I know. Tip for parodists: manufacture domestically.

And ICE will use the ‘good faith’ exception, and claim they believed them to be imports.

There are no lawyers left who understand copyright and trademark law.

From the bottom of the image:
” *NFL licensed merchandise will never favor one Club over another or make derogatory use of another Club’s marks. “

That idea ignores the existence of parody (and possibly other considerations), but it’s at least internally consistent.