Despite all of the coverage we provide on alcohol-related trademark disputes, Moosehead Breweries has still managed to separate itself from the pack with its aggressive trademark enforcement behavior. You should recall that this is the brewery that sued a root beer company called Moose Whiz and a brewery making a beer called Müs Knuckle under the theory that because it somehow got a trademark on the term “moose” it therefore means that any beverage company using that word is infringing its trademark. That’s not correct on multiple fronts, including the question of whether any customers are actually or potentially being confused by the so-called infringing uses. Add to that the somewhat strange circumstance of Canada’s CIPO approving a heritage word like “moose” in the Canadian market.

Well, Moosehead is still at it, this time suing a brewery called Hop ‘N Moose over that same trademark.

Moosehead Breweries Limited, based in Saint John, New Brunswick, sued the Hop’n Moose Brewing Co. last week in federal court in Vermont, alleging trademark infringement. The Canadian firm alleges that the moose image the downtown Rutland brewpub uses is too similar to the moose head with antlers the larger company uses in its logos and branding materials.

The lawsuit asks for a jury trial and wants Hop’n Moose ordered to hand over any profits it has made while using the moose image. It also wants the Rutland company to stop using the image and to “deliver up and/or destroy” all trademark infringing products. The filing also demands that Hop’n Moose stop using the domain address for its website, hopnmoose.com.

Here again we see Moosehead wielding a fairly generic term like a trademark cudgel. I have to admit being a little surprised that the filing goes in as hard as it does on the actual trade dress of both brands. In past trademark suits, Moosehead has thought it enough to show up with its “moose” trademark and assume that was enough. Here they are going after the image of moose in both companies’ logos, claiming that they will cause confusion. Here are both logos. 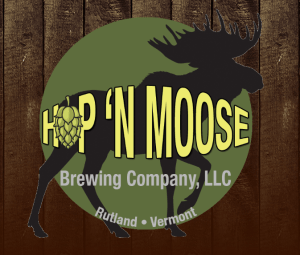 Sure, you might say there are some similarities there, but only because both show an image of a moose. One is just the head of the moose, hence the beer named “moosehead”, where the other is the silhouette of a full moose. It should be noted that Moosehead does have a trademark on a version of its moose head image that is a silhouette, except that I can’t find it being used anywhere. Even if the brewery does use that image, it is certainly not the image or logo that the public associates with Moosehead beer.

And that’s the ultimate point here. The rest of the trade dress is, again, different enough to stave off any real customer confusion. In addition, the company names are different enough, and prominently displayed in both cases, to keep customers from being confused. It’s a wonder why Moosehead keeps going down this road, but I suppose bullies are going to bully.

Being a moose (for the purpose of this discussion) I cannot comprehend how Moose Head breweries can use our species as a trademark without violating our natural rites, as being a moose is our species and not theirs.

Mankind named the species, likely long before the concept of species existed, and since corporations are people, and not moose, we believe that their use of our name to be both frivolous and demeaning. Either let the concept of moose be free, or stop it altogether.

Kinda makes me wish for the second coming of Christ. After all, with copyright being life plus 70 years, having God’s son running around, able to testify in court that his (heavenly) Father is still alive would cause all KINDS of trouble for people in terms of intellectual property.

Not to worry, you’re talking about supernatural rites.

You know…maybe companies SHOULD name themselves using a random number generator.

…No, some company would still find a reason to sue because it looks like their business number or something.

Sue all the meese, for they all infringe on your stupid trademark!

It is almost as if the only way Moosehead can make a profit is by being the only beer on sale.

Who drinks their “beer” anyway? Yech…

Maybe one of those guys that have the name moose should sue moosehead for mocking his name and cancelling the copyright, especially as the company is not that old and many kids had the first name moose.

Or maybe all those that have been sued should get together and sue as one entity to save money suing together and have the copyright cancelled, when a business has to go after a company that is completely different in every way or even when it is so obvious they are different then the full copyright should be cancelled.

And having multiple companies with similar names showing that they do not mind others using the word moose should show any court that a copyright is not acceptable especially for the name of the countries national animal.

I would love to see a story where moosehead goes bankrupt after having to pay back millions they have already spent.

I built trailers and call them Gecko trailers and had a lawyers contact me. luckily I could point out that many companies have been using the name for decades longer than there copyright demands. I listed a few dozen worldwide and they did not contact me again not even to withdraw the threat of suing me.

Yes, since my last name is Johnson and our kids are named Steven and Joan, why can’t I start a company called SJ Johnson after my kids? Or even Johnson and Johnson?

NOTE: My cousin already named his lumber and supply business Billie Joe Johnson and Son, LLC. Apparently there is a difference between selling wood and the stuff that gives you a woodie.

Their execs wouldn’t sign checks just to keep their lawyer employed. Their lawyer is certainly reassuring them that they can win this, but this is about their crappy leadership, not their legal team.

I’m surprised there’s no post from the usual endorsing Moosehead. I was going to accuse him of having antler marks on his chest.

I’m sorry but I’m with Moosehead on this one. I drink Moosehead beer and I’m very familiar with their logo and Moose images they use. The Moose image in dispute is almost the same exact moose image Moosehead uses on some of their products.

No one is confusing the two and hop n moose is a small local brew pub that as far as I know isn’t sold outside of central vt. Honestly it’s ridiculous that this large brewer is harassing this small local brewer, who runs a great establishment(good food and beer, loads of fun). Hopefully the court views this as frivolous as it is and orders moosehead to cover hop n moose’s legal expenses. I expect this frivolousness from us companies but from Canadians?