Copyright ruins freaking everything. Five years ago, today, Demi Adejuyigbe gifted the world with an incredible video of him dancing to Earth, Wind & Fire’s classic song September. If you somehow have not seen it, I’m jealous of you for getting to watch it for the first time.

It’s a reminder of the kind of gleeful content creation that only the internet enables. And it went pretty viral. So much so that Demi decided to do it again the following year. And then each year after that, with each video getting bigger and more ambitious (in somewhat incredible ways). He’d put them all threaded as replies to the original 2016 video. And I’d embed the tweets here, except for the fact that copyright ruins everything and Sony apparently decided to take down the 2017 and 2019 videos from Twitter: 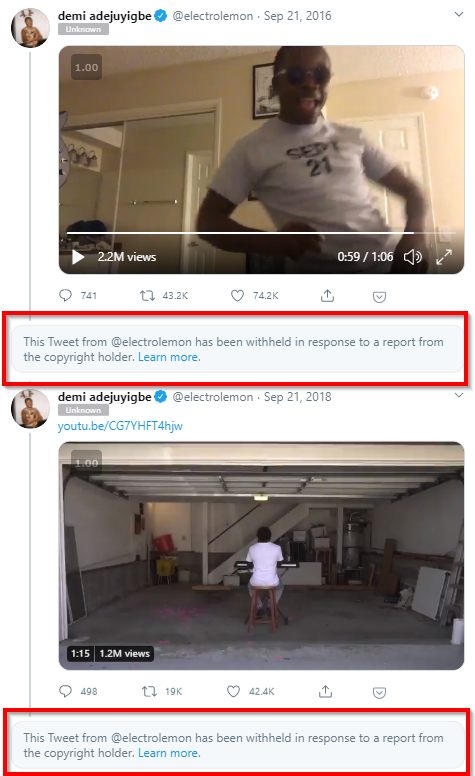 This is even more ridiculous because Demi turned his September 21st videos into a successful fund raising tool for tons of good and important charities. And Sony made them disappear from Twitter. All for copyright. To be fair, the videos are still available on YouTube, but it’s crazy that they’re missing from Twitter.

Anyway, Demi has released the latest such video and it’s very much what I needed today. I’ll embed the YouTube version since apparently that has a better chance of not being stomped into the ground by a Sony copyright claim. Please watch the whole thing, and consider donating at Sept21st.com:

Bloody stupid copyright. This clearly isn’t destroying a market for the original or anything like that. Ridiculous.

This clearly isn’t destroying a market for the original or anything like that.

If anything, his videos help expand the market???well, at least on the 21st day (and night) of September.

Well sure, he’s adding value to a song and promoting it.

Liars and thieves say this is as it should be.

IANAL, but couldn’t this be argued as being transformative?

He set a goal this year of raising $50,000 for charity. As of today, they’ve raised over $241,000. Watching these little videos brightens my day, but also tells me there are still good people in the world.

At least we know we?re getting another video next year. ????

Yes, I know it’s fun to make a video dancing to a popular song, but at this point, it’s too much of a risk. We need to encourage people to stop using other people’s content, especially songs from big publishers.

You can argue that the video is fair use or transformative or that it’s doing good by raising money for charity, but since it wasn’t approved by Sony, they’re going to issue a takedown.
So, again, don’t use any content by Sony or you’re risking a takedown or other actions.

It’s very difficult to find the link to donate to Demi’s charities which is sad. The Verge and TechDirt etc should all make that prominent.

Der,I just found it in the article, apologies!!!