Techdirt's think tank, the Copia Institute, is working with the Trust & Safety Professional Association and its sister organization, the Trust & Safety Foundation, to produce an ongoing series of case studies about content moderation decisions. These case studies are presented in a neutral fashion, not aiming to criticize or applaud any particular decision, but to highlight the many different challenges that content moderators face and the tradeoffs they result in. Find more case studies here on Techdirt and on the TSF website.

Summary: In late June 2021, Twitter briefly suspended the account of Ravi Shankar Prasad, the Indian government’s Technology Minister because his content violated copyright. Although Prasad was given a copy of the DMCA (Digital Millennium Copyright Act) takedown request, he posted a short Twitter thread that claimed this moderation action was Twitter silencing him, rather than simply responding to a takedown notice targeting alleged copyright violations. 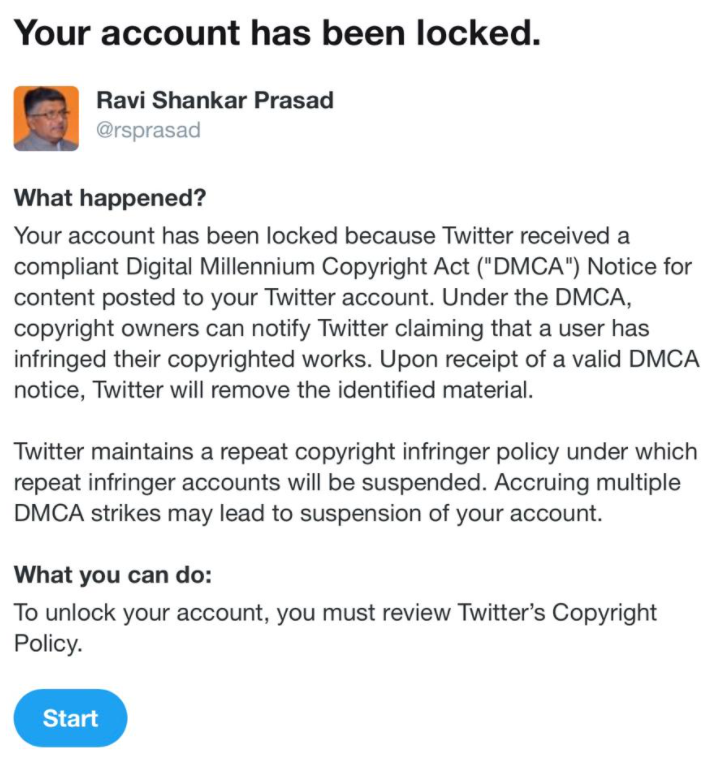 According to Prasad, the removal of his tweets and brief suspension were the result of him not aligning himself with Twitter’s “agenda.” He claimed Twitter would “arbitrarily” do the same to others who did not “tow the line that they draw.”

Prasad also claimed the takedown via DMCA notice violated Indian law. Specifically, the Technology Minister claimed Twitter violated local law by failing to provide him with prior notice before locking him out of his account. The law cited was Rule 4(8) of the Information Technology Rules 2021.

Prasad’s pushback against Twitter’s decision to suspend his account based on claims of copyright violations came after weeks of Indian government officials’ public criticism of American social media companies. Shortly after this critique, the new Information Technology Rules law went into effect on May 26, 2021.

The new law affects multiple US social media platforms. It requires them to remove certain content within 24 hours of notification and forces them to set up local offices in India where complaints can be handled by newly-created compliance, contact, and grievance officers. While the new law has been in the works since 2018, its passage was accelerated by Twitter’s refusal to block tweets/accounts associated with the long-running “Farmer’s Protest” that greeted the Indian government’s passage of laws that many farmers believe do more to aid corporate farms and large agricultural concerns than the many small, independent farmers that populate the country.

Earlier in June, the Indian government issued a “final warning” to Twitter, ordering it to comply with the new law or “face consequences.” Twitter has since temporarily removed nearly 500 tweets associated with the Farmer’s Protests. During the same time period, its offices in India were raided by Indian law enforcement after Twitter labelled a tweet from a member of India?s ruling party as “misinformation.”

Resolution: This chain of events appears to have resulted in government officials like Prasad believing normal moderation actions by Twitter are actually a form of censorship targeting a government that was recently highly critical of US social media services. This has led to even more problems for Twitter: the Indian government has filed a request with a New Delhi court to strip Twitter of its liability protections for user-generated content. For the time being, Twitter’s approach to the handling of DMCA takedown notices appears unchanged, even when it involves the accounts of foreign government officials.

If only there were some way for Twitter to operate entirely in the U.S. without having a local branch in India, so that they don’t have to obey Indian laws, but yet still allow people from India to access their service…

Yeah, it won?t work. If someone breaks a law from the host?s country (yet legal in their country), what do you do? What about vice versa?

This is the inevitable conundrum for EVERY moderately-popular web service. There are too many countries, each with their own laws, some of which contradict other countries? laws, to be able to adhere to them all. Each country will assert their sovereignty over their citizens, regardless of what website they?re using.

I suppose one could try to restrict everything and only allow what every country allows?good luck! At least it will provide permanent employment to small armies of international lawyers.

They could tell foreign totalitarians where to stick their anti-free speech laws. But there is money to be made in these countries and for corporates thats more important than taking a moral stand.

When it is impossible to please both sides (in this case, foreign government officials and content owners protecting their intellectual property), which party should be prioritized?
https://solitairespider.co/

Some things need local offices in India. Those telephone boiler rooms from which I receive calls about my impending arrest for fraudulent activity on my Social Security account, for instance, need to be there because that is where the labor is.

On the other hand, an internet service can easily plunk its servers in a colo up in Virginia and never need to have a physical presence in India. Sure, that means the service may not have the opportunity to pay taxes in India, but they can just mail that money to me at [address redacted] and everything will be fine.

This incident might come across as Twitter being overreactive, but it is just a piece of the bigger picture. Twitter is taking sides in India and is decidedly backing the Modi government to silence opposition. https://www.bbc.com/news/world-asia-india-58196793

The latest chatter on the Techdirt Insider Discord channel...