Summary: One of the challenges for any website that allows for user content — no matter the size of the website — is how to deal with trollish behavior. There are a variety of options available, including just deleting such comments, but one option that got attention in the mid-2000s was the idea of disemvoweling: literally removing the vowels from any comment deemed trollish. This was something of an update on concept of merely “splatting out” letters (i.e., replacing certain letters with ‘*’ to make them less searchable and to create some level of disassociation from the initial word).

The history of disemvoweling is not entirely agreed upon, though it is clear that James Joyce used the word to describe writing without vowels in Finnegan’s Wake, published in 1939. Many people associate the modern use of it with Teresa Nielsen Hayden, who wrote in the comments on her own blog (Making Light) about how she had removed the vowels from someone who was trolling. 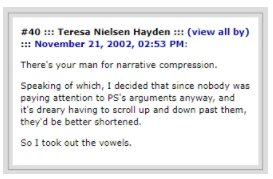 Other users then referred to this as disemvoweling. The word and its usage as a moderation mechanism appeared in other places before, including in a 1990 version of the RISKS Digest newsletter discussing a proposed anti-hacking law.

Nielsen Hayden embraced the power of disemvoweling, and supported efforts to make it easier to do. (She initially said she removed vowels by hand).

In August of 2007, the popular blog (and former zine) Boing Boing announced that it had relaunched and brought back comments, with Nielsen Hayden joining the site to help with community management. This immediately resulted in questions about whether or not BoingBoing would now embrace disemvoweling as a technique to manage trolls as well. Nielsen Hayden suggested that it might, but she did not expect it to be that frequent:

“Glad to see comments back. With TNH moderating should we expect frequent dis-envoweling?

Only if it’s warranted. I doubt I’ll have frequent cause to use it.” –Teresa Nielsen Hayden

The blog did embrace disemvoweling as a technique, though. Others on the Boing Boing team talked about how it seemed to work quite well. Xeni Jardin noted that while it did involve a fair bit of human effort, it appeared to be mostly effective.

We hired a community manager, and equipped our comments system with a secret weapon: the “disemvoweller.” If someone’s misbehaving, she can remove all the vowels from their screed with one click. The dialogue stays, but the misanthrope looks ridiculous, and the emotional sting is neutralized.

Now, once again, the balance mostly works. I still believe that there is no fully automated system capable of managing the complexities of online human interaction — no software fix I know of. But I’d underestimated the power of dedicated human attention.

Plucking one early weed from a bed of germinating seeds changes everything. Small actions by focused participants change the tone of the whole. It is possible to maintain big healthy gardens online. The solution isn’t cheap, or easy, or hands-free. Few things of value are. — Xeni Jardin

In a separate piece, then BoingBoing writer Cory Doctorow talked about it as a way to “remove the poison” from online conversations.

For example, Teresa invented a technique called disemvowelling — removing the vowels from some or all of a fiery message-board post. The advantage of this is that it leaves the words intact, but requires that you read them very slowly — so slowly that it takes the sting out of them. And, as Teresa recently explained to me, disemvowelling part of a post lets the rest of the community know what kind of sentiment is and is not socially acceptable. — Cory Doctorow

However, he also noted that it often needed tools to make it workable, as doing it by hand was not scalable:

When Teresa started out disemvowelling, she removed the vowels from the offending messages by hand, a tedious and slow process. But shortly thereafter, Bryant Darrell wrote a Movable Type plugin to automate the process. This is a perfect example of human-geek synergy: hacking tools for civilian use based on the civilian’s observed needs.

But there aren’t enough Teresas to go around: how do we keep all the other message-boards troll-free? Again, the secret is in observing the troll whisperer in the field, looking for techniques that can be encapsulated in tutorials and code. There is a wealth of troll whisperer lore that isn’t pure intuition and good sense, techniques that can be turned into tools for the rest of us to use. — Cory Doctorow

The concept did get a bit more attention after that. The following year, Time Magazine described disemvoweling as one of the “Best Inventions of 2008” (even though disemvoweling was developed before that year). Almost exactly one year after BoingBoing did it, various Gawker blogs announced plans to also begin disemvoweling troll comments with a tool built into their content moderation system.

Resolution: The focus on disemvoweling eventually went out of favor. Boing Boing dropped the practice, as did other sites that had embraced it. In 2009, a writer for Albany’s Times Union newspaper noted that a corporate lawyer had ordered him to stop disemvoweling comments on his blog posts for the newspaper, though it was not clearly explained why the lawyers were concerned about it.

Most of the discussion about disemvoweling disappeared as well, other than a brief flare up when Washington Post owner Jeff Bezos apparently suggested in a brainstorming session that they should allow some users to pay to disemvowel entire stories (and other users can pay to re-vowel them later). It appears this idea did not gain any support.

I was an independent contractor with Gawker about 13 years ago handling comment moderation appeals. I answered the email account that people sent appeals to in order to get reinstated after getting banned.

Disemvoweling was the bane of my existence in that role because to consider an appeal, I had to read the comments that got someone banned to see if the editor/writer/mod was being overzealous (some of them were heavy handed with the ban hammer – I’m looking at you Gizmodo writers).

I had to read the (often very long) disemvoweled comments slowly to understand what the person had said. I started a list of disemvoweled "naughty words" I could search for to eliminate the easy ones (e.g. if you called the author of a Jezebel post a "cnt," you probably weren’t going to get reinstated).

They also didn’t communicate much with me, so the first time I saw the effects of disemvoweling, I didn’t know it was a mod doing it. I initially thought the bans were for people being annoying by writing their posts with no vowels in them.

The system used here on TD is sort of like disemvoweling, but it recruits the community into the effort.
Community standards are followed better when the community makes them.
The message is still there if someone really wants to see it & it makes it easy to see where the line is.

I have always had the idea that once a comment here at TD gets flagged to be hidden, it should automatically get converted from text to an image so that the actual text can not get indexed by search engines.

That way, it can still be read, but can not be used as a means to "spoil" search results.

Of course, a little judicious self-disemvoweling can go a long way toward increasing impact. I can guarantee you that the people who find

written on their windshield with yelllow grease pencil know exactly what the message is.

I have never done this myself… as far as you know.

Actually that’s very helpful. By placing it on the windshield, the driver will know all the gearbox options without having to look down.

Just like a real head-up display. Of course I don’t recommend stepping through the range whilst moving, unless you are Garage 54 – Whole Lada Trouble at Novosibirsk Airport, https://www.youtube.com/watch?v=Yoe5nrqVdeo.

Let me try it out.

Yup, disemvowelling the sentences will make it sound moronic. That also applies when the sentence has all its vowels added back

Boing Boing was an ardent supporter of the great vowel airlift to Bosnia. Admittedly, such efforts are only short-term, and nations have to develop their own vowel resources, lest they run out of vowels mid-sentence.

Will Welsh trolls even notice?

They’ve long since out-sourced their forums, so evidently wasn’t much of a success.

Except the success or failure of a single feature wouldn’t necessarily be the cause for a change to a commenting system. They switched to using Discourse, which works really well and they don’t appear to have a significant moderation issue. They do hide comments that get flagged and the mods do remove comments that violate community standards.

Removing the vowels from comments was a vindictive way to censor comments. It was an overt attempt at public humiliation rather than quiet deletion of posts. But it was not effective. People who are trolls are not afraid of public humiliation. It just kept the conversations clogged up with the original troll posts, just in disemvowelled form, when what was needed was a careful pruning, removing the problematic posts entirely, and the problematic posters entirely if necessary.

Now that’s what I call a vowel movement.

Because INFURIATING TO EVERYONE! Not just the alleged "troll"!

The half-censoring euphemized as "hiding", with added flat LIE that it’s done by "the community", no Admin involved.

Your hiding of "Koby" (which looks like astro-turfing so can claim there’s opposition here) only proves that you’re WEAK and STUPID.

SHUNNED. You now have only a handful of fanboys left.

You get the key to the liquor cabinet? Or the special box?
Come back tomorrow when you?re sober. Right now you make zero sense.