Mirror Crowdfund: Our New Paper On NFTs And New Scarcities

Over the last year or so there has been tremendous hype around the concept of NFTs (non-fungible tokens). In my experience so far, people tend to fall into one of three camps surrounding NFTs. There are the “true believers”, who are obsessed with the space and believe it is going to change everything about creativity and culture (and, according to some, “ownership”). There are the skeptics, who insist that it’s a scam or the new tulip-craze bubble, and that NFTs are helping to burn down the planet with wasted energy usage. Finally, there’s a very large camp of people who insist that they just don’t understand NFTs at all and have completely blocked out the possibility that they could matter. I’ve been following the whole concept for a while now and I put myself in a weird place, potentially straddling multiple camps. I think there is a lot of nonsense in the space, and jargon meant more to confuse than to help — but at the same time, I think there really is something interesting in the potential of NFTs, though the real value may be in a different place than even NFT-boosters believe.

The thing that’s interesting to me, mainly, is how NFTs have found a way to productize a new scarcity — one that may be really interesting (even as many of the current uses are missing that). Long term Techdirt readers may recall the series of posts I wrote back in 2007, exploring “The Economics of Free,” in which the core point was about understanding what was scarce, and what was not just abundant but infinitely available — something I refer to as “infinite goods.” One of the points raised in that series was how new infinite goods not only completely upended traditional business models, that they also created new scarcities, and the really interesting business models were in finding those scarcities and leveraging the infinite goods connected to them to make them more valuable.

At the time, many of the new scarcities I was talking about were things like time and attention. But NFTs are actually highlighting a new set of potentially interesting scarcities related patronage and support, which previously had been amorphous concepts but which can actually be quantified to some level today. At the very least, I think this presents some interesting possibilities that go way beyond the state of the current NFT market (which, no doubt, is filled with significant hype, fluff, and nonsense). Just because there may be some level of exaggerated frenzy around NFTs, which turns some people off, that does not mean we should completely ignore and dismiss some of the underlying ideas that make NFTs so interesting.

That’s why today we’re launching a crowdfund on Mirror.xyz, a decentralized publishing platform with built in crowdfunding tools, to write a deep-dive paper entitled Newly Finite Themes that will explore the ins and outs and details of NFTs. The paper is not going to be an unfettered boosterism of NFTs, nor will it be condemning the entire concept. The plan is to explore every aspect of NFTs — including the the economic, legal, cultural, and (yes) environmental implications — and produce a thorough paper that will highlight which parts of NFTs are actually interesting and have real potential. In some ways, this will be a follow up to my 2019 Protocols, Not Platforms paper that helped inspire Twitter’s Bluesky initiative.

As part of this process, we want to experiment with the very technologies we’ll be writing about — something we are enabled to do by Mirror (and yes, to back the project on Mirror, you have to use ETH). When the paper is complete, it will be minted as an NFT. Backers of the crowdfund will get a token that will entitle them to some of the proceeds when that NFT is sold. In addition, backers who support us at a level above 1 ETH (up to a total of 15 such backers) will get a separate NFT showing their support for a protocols over platforms approach to the internet. Finally, Mirror has a very cool new feature, enabling the top three backers to be rewarded with individual NFTs commemorating their key role in enabling this paper, and giving them Executive Producer, Producer, or Associate Producer status for the paper — though this is only available to those who back within the first few days of the crowdfund.

All of the details can be seen on our Mirror crowdfund page. 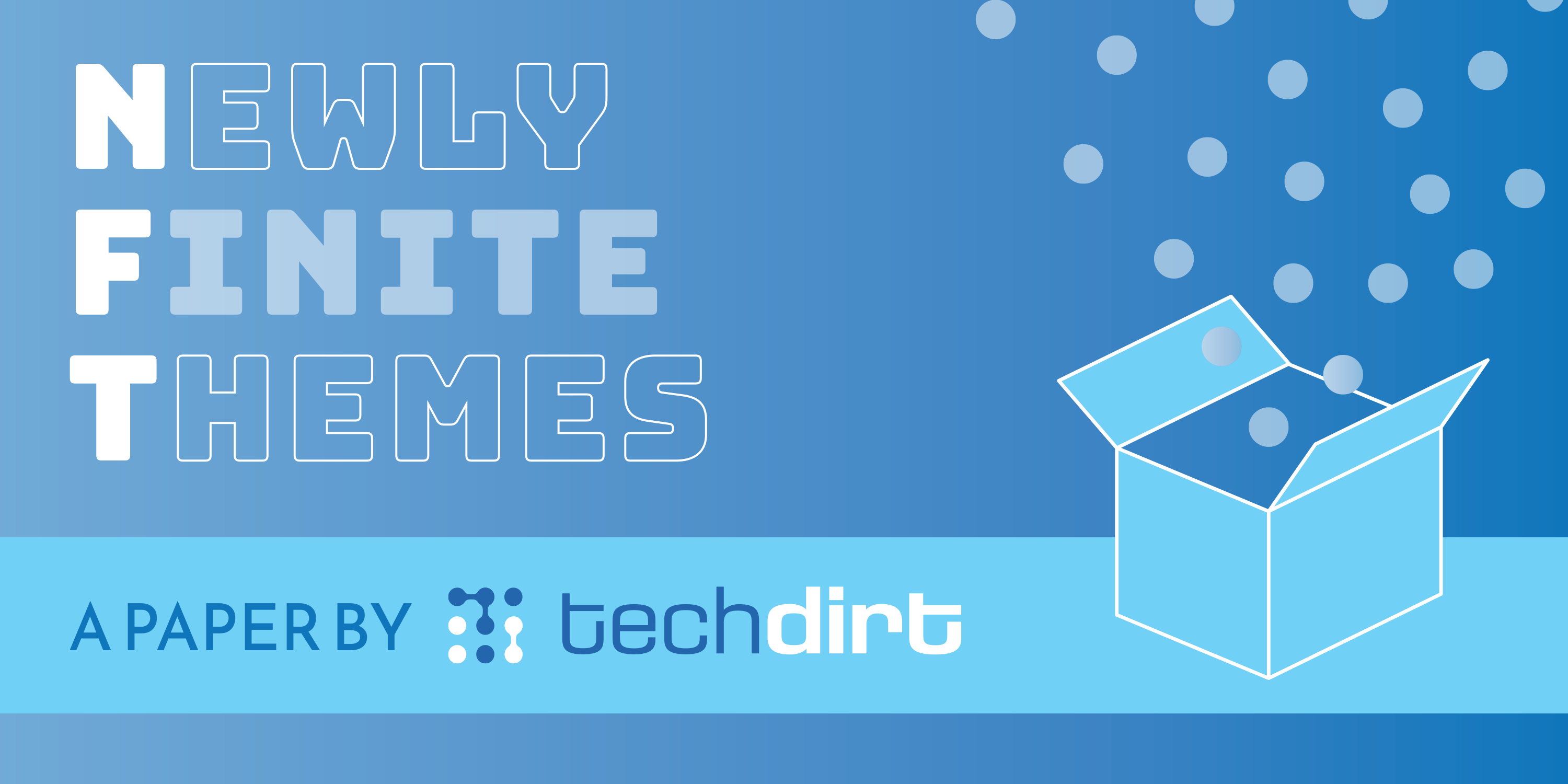 Comments on “Mirror Crowdfund: Our New Paper On NFTs And New Scarcities”

Removing the Gold and silver that Backed and supported our Money, create an NFT??
That now our money is worth about as much as the paper its on?

If it was a crowdwritten paper and everyone who contributed thought would get a share of some hypothetical NFT, then you might have had something.

That’s not how any of that works.