Normally, when we talk about beer in these pages, we’re typically talking trademark infringement issues. Because of the creative way those in the exploding craft brewing industry have gone about naming their brews and designing their labels, far too often this results in disputes between parties over what is too similar to what, or who’s design is too close to another’s. While this specific story doesn’t involve trademark law or disputes, it does still exist due to the creative practice of labeling.

Flying Dog is a well known name in the craft beer industry. Not huge, but certainly not small, Flying Dog’s labels have a certain aesthetic motif in the artwork that is easily recognizable. As part of the process for using those labels on cans and bottles of beer, the brewery has to gain a certificate of label approval from the ATF. It also then has to gain the approval for labels from individual state agencies as well. For its forthcoming “Freezin’ Season” ale, Flying Dog was able to get the afore-mentioned approvals at both the federal and state levels in every case, except for North Carolina. There, the North Carolina Alcohol Beverage Control Board (ABC) denied approving the label, thereby disallowing Flying Dog to sell bottles within the state entirely. Why? Well… 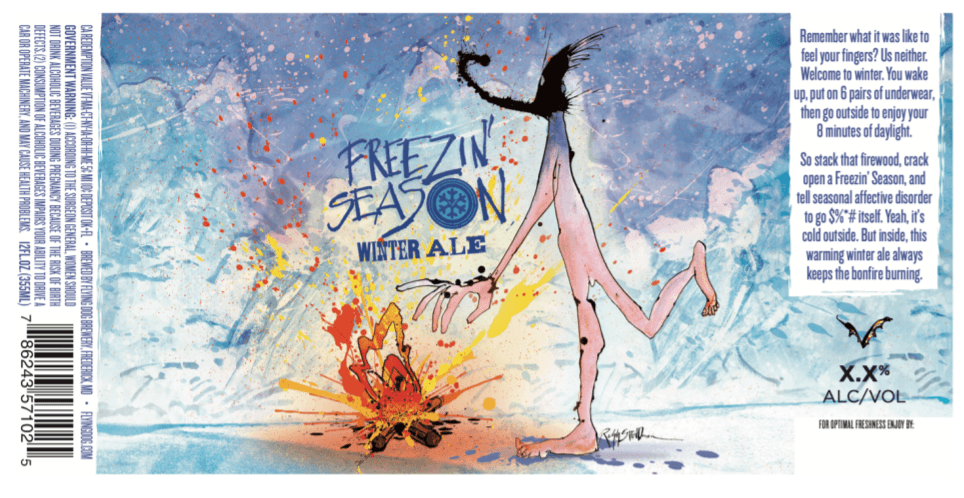 Still having trouble figuring out what the problem is? Well, it’s that little protrusion from between the outlined figure’s legs. Is it a penis? Gasp! Maybe! Flying Dog hints that it’s actually a little tail nubbin, but I’m not sure I believe them. Nor does that really matter, actually, since this beer label is absolutely constitutionally protected speech and the ABC’s refusal to permit its sale in commerce not only serves as a violation of Flying Dog’s speech rights, but also is prior restraint.

The offending label—like all Flying Dog beers—contains a distinctive cartoon image by illustrator Ralph Steadman, whose work with the Maryland-based brewery dates back to its roots in the gonzo-lands near Aspen, Colorado. It’s not clear exactly what the state’s regulators object to—though the naked, humanoid figure on the beer’s label does sport a small appendage between its legs. Caruso says he suspects that “tail-like thing” is what triggered the ban.

“The regulation is, on its face, in constitutional ‘bad taste,’ as it is in clear violation of the First Amendment,” attorneys for Flying Dog, including veteran First Amendment lawyers Greg Doucette and Marc Randazza, argue in court documents. They say banning the beer label is an unconstitutional viewpoint-based restriction on speech, similar to restrictions that the U.S. Supreme Court has repeatedly struck down.

It’s hard to imagine what the counterargument in court will be, honestly. The puritanical viewpoint of North Carolina’s ABC ought have no bearing on whether or not another entity’s speech rights should be infringed. Given the approval for the label in literally every other state and the federal government, it’s difficult to see how the state could even mount a serious case that there is anything offensive here.

Thine own eyes should have you reaching the same conclusion. Even if we assume that the depiction includes a small, cartoon penis, it’s certainly not pornographic in nature. Nor is it detailed enough to warrant concern amongst anyone at all. It’s just a tiny blip on the artwork of a beer label.

And, yet, it appears this is a regular thing in North Carolina.

This is not the first time that North Carolina’s beer regulators have attempted to censor a product being sold in the state. WECT Channel 6, based in Wilmington, North Carolina, reported in 2019 that the state ABC had blacklisted about 230 beer and wine brands since 2002 for having labels or names that offended the board’s sensibilities. Among the “inappropriate” products banned from the state are beers with names like “Daddy Needs His Juice,” and “Beergasm.”

Ironically, the North Carolina ABC reportedly told Utah-based Wasatch Brewing Company that its “Polygamy Porter” could not be sold in the state because “polygamy is illegal.” But the board also banned a beer named “Kissing Cousins” despite the fact that it is literally legal to marry your first cousin in North Carolina.

This is all very, very funny, but it’s also a very real problem for Flying Dog. In its suit (embed below), Flying Dog states that it is currently taking orders on the seasonal beer in preparation for the winter months and it cannot currently sell in North Carolina due to all of this. Given that it also states that bottled beer is 90% of the company’s business, even a single brew being disallowed in a single state means we’re talking about very real money.

This lawsuit should be a fairly easy winner. And, frankly, it appears as though it’s well past time that North Carolina get a lesson in free speech when it comes to beer labels.

We all know that’s a drawing of Mike and he is secretly behind getting this label blocked.

" between parties over what is too similar to what, or who’s design is too…"

"had blacklisted about 230 beer and wine brands since 2002 for having labels or names that offended the board’s sensibilities."

So they didn’t sue for violating their 1st Amendment rights why??
Its not pretty or easy to do, but being able to show a long term pattern of the board using their sensibilities rather than actual legal thingys… I’m thinking many 0’s on a check.

Someone might want to inform the board that polygamy is illegal, but violating the Constitution is much worse.

" the fact that it is literally legal to marry your first cousin in North Carolina."

lightbulb I think I know why the board is like this. 🙂

Waves hi to Marc and T. Greg incase they wander by cause they’d talk to me on twitter.

..it is literally legal to marry your first cousin in North Carolina.

Wait, what were we talking about? Oh yeah, prudes…

Ironically, the North Carolina ABC reportedly told Utah-based Wasatch Brewing Company that its "Polygamy Porter" could not be sold in the state because "polygamy is illegal." But the board also banned a beer named "Kissing Cousins" despite the fact that it is literally legal to marry your first cousin in North Carolina.

… you can’t advertise a product that mentions cousins kissing in a state where you can legally have sex with your cousin if you marry them first. Honestly the jokes practically write themselves at that point.

We have these rent-taking agencies for corrupt officials all over the country in the U.S., dating all the way back to Prohibition. Now it works the same way for marijuana.

You want to do something, you need a license. You want a license, you need to apply on the right day at the right hour in the right office that would be closed that hour if you weren’t paying the right person, and no, they’re not announcing the hour in advance. You want to keep the license, you better not have any official mad at you, wonder how you smooth things over. I mean, just total corruption, with the only argument to be made being "it’s better than locking everybody up for having fun". And that it is.

EAGLE FOODS INTERNATIONAL is dedicated to providing the best quality Himalayan pink salt products to our clients worldwide. We make it possible through the up-to-the-mark manufacturing facility and hard work of our operation team. We believe in long-term relationships with our clients, which is why compromising on quality isn’t an option.

EAGLE FOODS INTERNATIONAL isn’t only a Himalayan pink salt manufacturing facility since we’re performing multiple operations under one umbrella: from the extraction of raw pink salt from our mines to processing and refining, and then exporting it to our clients worldwide.

So, please don’t compare us with third-party vendors or pink salt exporters because they can’t offer you consistency and guarantee of the same quality standards every time. On the other hand, we’re shipping the same quality of Himalayan pink salt products (edible & crafted) to our clients now, just like we delivered to our first-ever client.

So they didn’t sue for violating their 1st Amendment rights why??

Filing a lawsuit requires money, time, and the willingness to fight. Lots of businesses barely have one of those things.

yup, that’s same basic reason most criminal court cases in America are settled by Plea-Bargains — too expensive & difficult to fight the government even when one is innocent.

Plus, we all need to thoroughly respect & support our noble government regulators — they desperately battle each day to protect us snowflakes from the massive hordes business evil-doers.

If only there was a min penalty for violating a constitutional right they could have found representation and slapped these slack jawed idiots down before it got to this point.

Unmarried sex between cousins is illegal? That’s a pretty specific law. Does it mention gender?

It’s possible that unmarried sex is also legal so long as the ages are high enough, I can’t be bothered to look into it but if you can marry your first cousin in the state it wouldn’t surprise me if even that wasn’t actually required for the sex to be legal since it’s clearly considered acceptable after that step.

Sorry TOG, I was being facetious/rhetorical.

Looking at this from a country where it /is/ legal to marry a first cousin (if unusual), it’s a bit strange.

They have a few risque (relatively speaking) brands. Raging bitch is the one that immediately came to mind. They also had a "doggy style" which is no longer being made. Then there’s "The Truth" that had a caricature of Donald Trump, that has since become more generic evil politician.

Fair enough, it can be hard to tell at times with text.