Hong Kong Government Arrests Four Members Of Pro-Democracy Hong Kong Alliance, Shuts Down Its Online Presence
Billy Mitchell Lets His Site Lapse, With A Critic Of His High Score Claims Swooping In To Take It Over

Summary: On the 32nd anniversary of the Tiananmen Square protests, internet users noticed Microsoft’s Bing search engine was producing some interesting results. Or, rather, it wasn’t producing expected search results for some possibly interesting reasons.

Users searching for the most iconic image of the protests — that of the unidentified person known only as “Tank Man” — were coming up empty. It appeared that Microsoft’s search engine was blocking results for an image that often serves as shorthand for rebellion against the Chinese government.

As was reported by several web users, followed by several news outlets, the apparent blocking of search results could be observed in both the United States and the United Kingdom, leaving users with the impression the Chinese government had pressured Microsoft to moderate search results for “tank man” in hopes of reducing any remembrance of the Tiananmen Square Massacre, which resulted in the deaths of 2,500-3,500 protesters.

The apparent censorship was blamed on Microsoft’s close relationship with the Chinese government, which allowed its search engine to be accessed by Chinese residents in exchange for complying with government censorship requests.

This led to Microsoft being criticized by prominent politicians for apparently allowing the Chinese government to dictate what users around the world could access in relation to the Tiananmen Square protests.

Resolution: Shortly after the apparent censorship of the iconic “Tank Man” image was reported, Microsoft claimed the very timely removal of relevant search results was the byproduct of “accidental human error.”

However, the company refused to offer any additional explanation. And, while searching the term “Tank Man” produced search results in Bing, it did not generate the expected results. 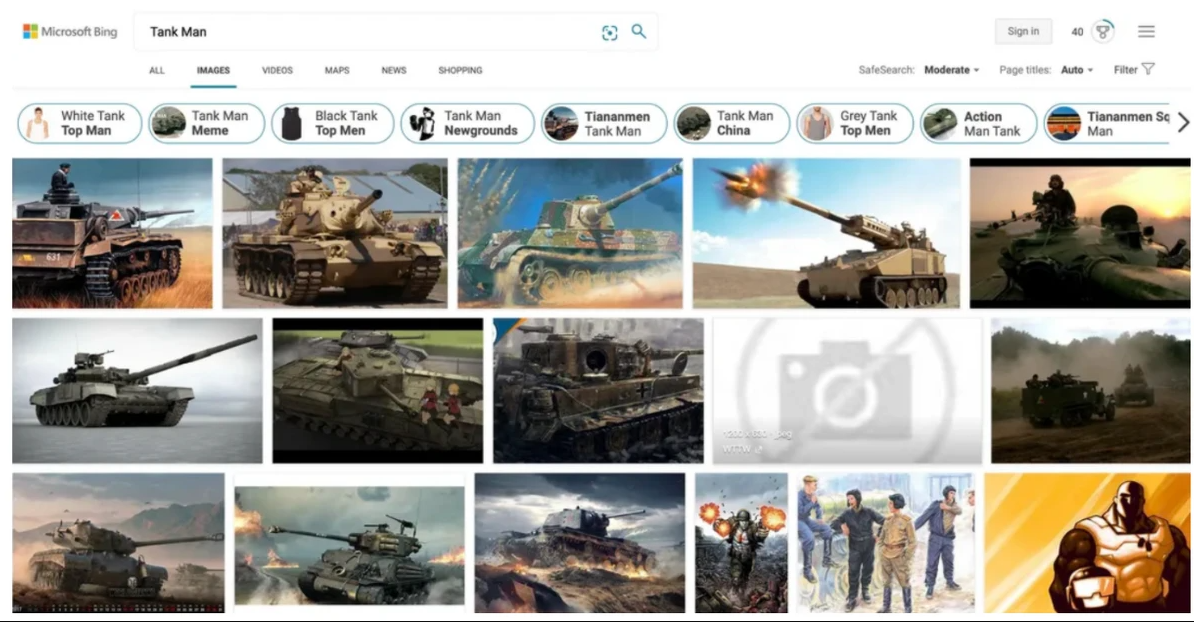 Image via The Verge

Several hours after the first “fix,” things returned to normal, with “Tank Man” searches bringing up the actual Tank Man, rather than just tanks or tanks with men near or on the tanks.

More clarification and comment was sought, but Microsoft apparently had nothing more to say about this “human error” and its conspicuous timing. Nor did it offer any details on whether or not this “human error” originated with its Beijing team. It also didn’t explain why the first fix resulted in images very few people would associate with the term “Tank Man.”

We don’t want our relation with China to tank, man.

More clarification and comment was sought, but Microsoft apparently had nothing more to say about this "human error" and its conspicuous timing….

When the mysterious "glitch" occurs, and there’s no explanation, we know that they’re lying. This is obvious if it favors a repressive government. But for some strange reason, when it’s utilized over here in the United States for political censorship, suddenly a lot of folks begin apologizing for the tech corporation.

when it’s utilized over here in the United States for political censorship, suddenly a lot of folks begin apologizing for the tech corporation.

No, it’s just that when you want to progress from "I don’t believe Twitter" (an opinion) to "Twitter is lying" (a statement of fact), it requires this pesky thing called evidence.

Nobody fucking cares. Close this shitty website down. I’ve been telling you to do it for years and you’re still here writing stupid stories that get a handful of comments. My facebook page gets more comments then your stupid fucking blog site.

‘Human error’ that kicked in on the anniversary and resulted in the removal of a search result that china really would rather people not know/talk about? Yeah Microsoft should have just admitted that either they folded temporarily to pressure or an employee went rogue and blocked the search result against the company’s wishes, because an excuse that laughably bad just leaves the company looking even worse than if they’d just owned it.

" And, while searching the term "Tank Man" produced search results in Bing, it did not generate the expected results"

To be fair, Bing is a shockingly poor search engine in a lot of ways. I have had it set to my default for a couple of months to gather some additional MS reward points and I’d say 8 times out of 10 I have to switch to Google to find what I’m looking for. I don’t do much image searching, but whether it’s a technical query, searching news or just a general search on another subject, it rarely returns what I’m actually looking for. Sometimes, the opposite, such as when I’m looking for info on facts relating to a particular issue and the first page of results is just right-wing opinion pieces, whereas Google’s first results will be the primary sources.

The "human error" is Microsoft bigwigs bending the knee to China.

What has always struck me about this clip is how hard the tank driver is trying to avoid hitting the protester. This shows how much humanity and empathy Chinese people have compared to US Americans. If that tank driver had been a US American he would’ve just driven over the protester, killing him dead (Especially if the protester had been black, that American tank driver would’ve crushed him into a bloody smear on the pavement). But then some people are more civilised than others.

Strange how every single one of those "back to normal" images is referencing the reporting on the disappearance of the image from bing and not the image itself.

But for some strange reason, when it’s utilized over here in the United States for political censorship, suddenly a lot of folks begin apologizing for the tech corporation.

Which politics are being ‘censored’ Koby, and as always be specific.

Yea, The Japanese bombed Chung King and other Chinese cities from the air, killing dozens at a time. The US strafed the roads out of Dresden after "Bomber Harris" annihilated that wooden city the night before. Lord Louis Mountbatten was so delighted with the result that my father spent weeks at Culver City film studios designing a firestorm so as not to burn the Palace in the Shitamachi Prefect. 15 sq.mi. and 88 thousand people died that morning… But wait https://imgur.com/a/KioLQHo

but owning it is going to piss off china even more than fixing the worldwide bad search results. noes!

You are free to complain…until the orange Chinese panda gets you Tienanmen Squarely in his sights.

I’ve been telling you to do it for years

Hi antidirt. Glad to see you’re finally moving onto the acceptance part of your grief, but it looks like you’re still struggling with the bargaining part. Does your wife know that you still need to insult the site in order to get an erection? How’s that Paul Hansmeier fund coming along, by the way?

Apparently you do, since it got you so angry. A person who doesn’t care wouldn’t be mashing the keyboard in a fit of rage.

"I’ve been telling you to do it for years"

Nobody gives 2 shits about what you want. However, someone with a passing relationship to reality would understand that by hate reading every article and whining about what you read, generates more traffic than just not coming here. Me replying to you here and mocking your childish inability to control your own impulses increases traffic here, and thus ensures you will never get your wish.

That does seem to be the modus operandi of your type – you’re unable to stop doing things to yourself that directly cause the problems you whine about.

"My facebook page gets more comments then your stupid fucking blog site."

Are the comments from similar drooling morons, or from people laughing at you the same way we do here? Not that "not as popular as Facebook" means anything to intelligent people, but without context we can’t tell if you get support over there, or that your idiocy just provides comedy value to a wider audience.

Which is only a problem for those whose greed overrides their morality.

What is your point here? There is plenty of information online about all the things you just mentioned. Might not be taught in schools (although I did learn a little about the Nanking massacre at school) but it isn’t being hidden.

China creates "outrage" for anything on a long list of stuff China does not like. The local population cant really access Western websites at all. So when a basketball says something semi pro Taiwan or Hong Kong the censors are the ones creating the "Outrage Storm".

This is on top of the current storm of, If you are a Tech Mogul, Actor, or other highly popular person, you better follow the party line or we can come for you even if your a billionaire.

If Jack Ma can be jailed and stuff for a minor comment, you have no hope but to pull the party line in China.

Do you realize how frightening to the regime that image is? Soldiers refusing to crush the rebellious is a nightmare that haunts authoritarian regimes because it shows their power is dependent on the army obeying their orders.

CCP propagandist, or idiot? Hard to tell but I’m going with A.

"Peoples Liberation Army" The PLA took some convincing to start running down the Chinese. LATimes ran a cartoon of Bush The Elder screaming from a bell tower at the tank driver to just drive!

Can’t it be both?

I understand and to some point agree with the sentiment, but you’re not going to be able to make a real argument against institutional racism among US authorities with that.

The two A-bombs are a distraction, a B-29 Navigator friend told me 106 Japanese cities were burned, and he (they) burned EVERYTHING above the 38th parallel. Another of my mentors was shan@rand org.
Even the image of Queensland Times front page wanders in & out and crosses up facts. AIG insurance had more to do with the design of Operation Meetinghouse than LeMay who takes the rap: midnight 9-10 March 1945 is sheep-dipped and lied about everywhere. Douglas Aircraft/ Rand was commissioned to research and develop Strategic weapons (mass urbancide) and analyze their use, CalTech’s Vista Project (1950) put the lie to "Strategic" and the PI (Oppenheimer) got buried.

Late in 1997, about 400 UCLA students converged a protest against Armand Hammer & Occidental petroleum in front of his Westwood headquarters, eventually 12 or 15 locked hands in steel tubes across Wilshire Blvd. LAPD had a few horse cops stomping around, TV helicopters were incessant for hours, cops started cutting kids out of the pipes. We locked up the boulevard from 3 to 6PM on Friday. Not one frame or mention was made on LA’s 3-5 TV new channels that night or that week. Never happened. https://nvdatabase.swarthmore.edu/content/uwa-people-block-occidental-petroleum-colombia-1995-2001

Are the comments from similar drooling morons, or from people laughing at you the same way we do here?

Five bucks says it’s average_joe replying to himself like the incel who frantically rubs his semen smears over his own bedroom wall.

It takes some gall to boast that your country’s morally superior trait is "Yeah, we kill our people too, but we have a fleeting thought to give that person a slightly less painful demise."

Hong Kong Government Arrests Four Members Of Pro-Democracy Hong Kong Alliance, Shuts Down Its Online Presence
Billy Mitchell Lets His Site Lapse, With A Critic Of His High Score Claims Swooping In To Take It Over
Follow Techdirt