The Tech Policy Greenhouse is an online symposium where experts tackle the most difficult policy challenges facing innovation and technology today. These are problems that don't have easy solutions, where every decision involves tradeoffs and unintended consequences, so we've gathered a wide variety of voices to help dissect existing policy proposals and better inform new ones.

Welcome To The New Techdirt Greenhouse Panel: Content Moderation At The Infrastructure Level

from the it's not the same dept

Today we’re launching our latest Techdirt Tech Policy Greenhouse discussion in which we bring in a bunch of actual experts to discuss and debate complex and nuanced subjects regarding tech policy — this time about content moderation at the infrastructure layer. We’re excited that we’re doing it in partnership with our friends over at the Electronic Frontier Foundation (EFF)! Also, we’re going to conclude this new series of posts on Techdirt with two virtual events. On October 6th from 9am to noon PT, we’ll have many of this series’ authors discussing and debating their pieces in front of a live (though virtual!) audience (register to attend here). The following day, on October 7th, EFF and Techdirt will be hosting a smaller workshop event to take some of what we learned and discussed the previous day, and see if we can come up with more concrete steps and approaches to make sure providers, policymakers, and others understand the risks and challenges of infrastructure moderation, and how to respond to those risks. 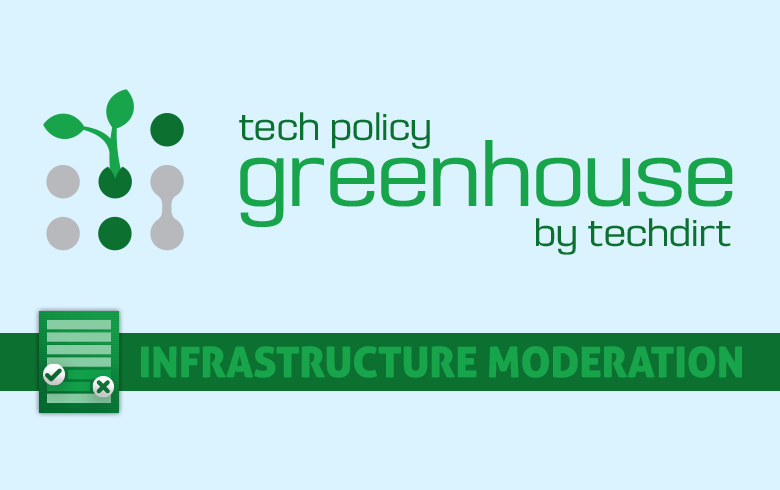 As you may recall, in the past we’ve had such Greenhouse discussions on broadband in the age of COVID, content moderation, and privacy.

The latest edition will again dip into the content moderation well, but will focus on a part of the discussion that is all too often forgotten (leading to potentially damaging consequences). Specifically, we’ll be talking about content moderation not at the “edge” of the internet (i.e., the user-facing services like Google, Facebook, and Twitter), but at the infrastructure layers deeper in the stack. This could include content moderation via hosting companies, domain registrars, ad networks, payment processors, app stores, and much, much more. Since so much of the discussion (and anger) around content moderation focuses on those edge providers that everyone is familiar with, it seems that nearly all proposals tend to just focus on correcting perceived content moderation ills for end users. But, at the same time, it seems that most of the policy proposals we see would apply equally (if not more so) to infrastructure providers.

Some of this is by design.

The “original” content moderation debate on the internet revolved around copyright — with the record labels (mainly) demanding ever more draconian regulations and standards to force content offline. However, as the technology evolved, we increasingly saw the legacy entertainment companies recognize that they could get more bang for the buck by targeting infrastructure intermediaries. They started to threaten ad networks and domain registrars for infringement that happened on websites that neither of those entities had power over.

Indeed, the biggest concern with moving moderation decisions down the stack is that most infrastructure players only have a sledge hammer to deal with these questions, rather than a scalpel. They can’t remove just the “bad” content. They can only remove (or, at least threaten to remove) all service, which can wreak havoc on a site. And we’ve seen how that pressure can be used to extreme ends. People focus on more recent examples, but over a decade ago, caving to pressure from US government officials, Amazon and others dumped Wikileaks.

That said, the infrastructure companies are still private entities, and do (for the most part, with a few exceptions) retain the power to run their businesses how they wish — including the right to refuse service to certain customers. And there are reasons why infrastructure providers may not just want, but actually need, the ability to do some amount of moderation — for example ISPs have good reason to run spam filters for their customers, and there have been cases where serving companies have (understandably) wanted to pull down malware bot networks using their infrastructure.

In other words, there are a lot of nuances here, and plenty to discuss and debate and explore better paths forward.

Finally, we should note that, beyond partnering with EFF for this project, we are also supported by the grant we received last year from the Knight Foundation to explore this very topic, as well as sponsorships from Cloudflare, Internet Society, and Golden Frog.

Comments on “Welcome To The New Techdirt Greenhouse Panel: Content Moderation At The Infrastructure Level”

Will Cory Doctorow once again be making an appearance?

“However, as the technology evolved, we increasingly saw the legacy entertainment companies recognize that they could get more bang for the buck by targeting infrastructure intermediaries.”

“They can’t remove just the "bad" content. They can only remove (or, at least threaten to remove) all service, which can wreak havoc on a site. And we’ve seen how that pressure can be used to extreme ends.”

This is TheMysterousMrEnter’s technocracy episode on Tumblr specifically about top-down moderation, nuke the entire service if it has one bad thing on it.

We have read of professors off the job because they spoke a single racist word … if you interpret what they said in Chinese as English. We have heard of students refused an education because they once copied the speech of someone of a different race entitled to speak a certain word – ONCE. We have heard of entire services shut down because of a site they provide service to because the site had such content on it.

I don’t think that there should be any question among the guardians of modern morality that it would be worth burning every library in the world rather than to allow a single bigoted sentiment to be read. And we KNOW they are there. What on Earth are they waiting for?

you burn in hell.. or come here..ill drag you to hell myself..who##

The Tech Policy Greenhouse
is a special project by Techdirt,
with support from: