The Snowden leaks exposing NSA dragnet surveillance prompted a lot of litigation. Cast a wide enough net and you’re bound to snag it on some people’s rights. The Wikimedia Foundation was one of several parties who sued over the NSA’s seemingly unconstitutional collection efforts, targeting the agency’s “upstream” harvesting of all data and communications straight from internet backbones.

To keep the case in court, Wikimedia had to plausibly allege its data and communications had been scooped up by the NSA. Fortunately, Ed Snowden had provided some pretty solid evidence for the Foundation. A leaked NSA presentation showed Wikipedia was included in the agency’s HTTP dragnet: 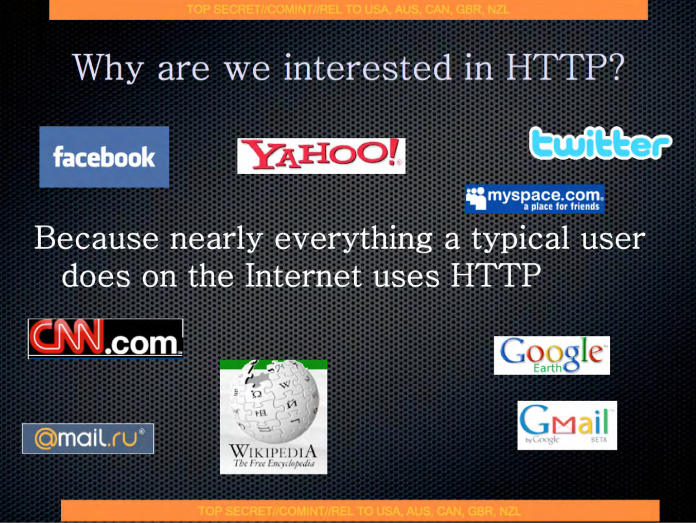 Well, that leaked presentation, which included the Wikipedia logo as part of the traffic the NSA could snag from internet backbones wasn’t enough to impress the district court, which dismissed the lawsuit. It was revived by the appeals court a couple of years later, which said it had alleged enough plausible harm and possible targeting to pursue its First and Fourth Amendment claims.

It went back down to the lower court, which did the same thing it did the first time around. The suit was again dismissed, this time because the district court felt the Foundation didn’t bring enough factual allegations to the table. But then, how could it? The NSA basically said facts could not be introduced or argued.

On remand, the district court ordered jurisdictional discovery. But when Wikimedia sought evidence related to Upstream, the NSA invoked the state secrets privilege.

That’s from the Fourth Circuit’s second pass [PDF] at the Wikimedia lawsuit. This time around the Appeals Court says it disagrees the lawsuit should have been dismissed for lack of standing, but that determination makes no difference when the government says the subject matter is too sensitive to be sued over.

After a discussion of what may or may not be inferred from the limited amount of information disclosed or discussed publicly about this NSA collection, the Appeals Court says no one will be discussing it any further, at least not in this Circuit.

Wikimedia argued the government can’t use the state secret privilege to evade its obligations to hand over information about dragnet surveillance, citing FISA and appellate precedent.

Relying heavily on Fazaga, Wikimedia claims that the third condition unambiguously encompasses the circumstances at hand: Wikimedia is an aggrieved person that made a motion before the district court under Federal Rule of Civil Procedure 37(a) to compel discovery of “materials relating to electronic surveillance.” Id. at § 1806(f). Wikimedia thus reads § 1806(f) as a free-floating right to obtain information related to the government’s electronic surveillance pursuant to any (and all) federal statutes or rules.

Reading the third condition in context reveals that Wikimedia’s gloss makes for a shiny but ill-fitting shoe. Both parties agree that § 1806(f) may apply regardless of who initiated the suit. But we agree with the government that § 1806(f) describes procedures for determining the admissibility of electronic surveillance information only when the government seeks to use such evidence in a particular proceeding—whether civil or criminal. Thus, even assuming that Wikimedia is an aggrieved person, we conclude that it can’t use § 1806(f) to force the government to introduce electronic surveillance information into this case,

Even if the court were to agree with Wikimedia’s interpretation, it wouldn’t change anything. Determining that the NSA engaged in unlawful surveillance of Wikimedia would only require suppression of evidence collected unlawfully. That’s not what Wikimedia is seeking here. It’s asking the court to review evidence of NSA collection activities to determine whether or not Wikimedia can continue its lawsuit over alleged unlawful surveillance.

This may be a Congressional problem, albeit one created in an attempt to solve a problem, the Court points out:

Congress provided for judicial review of executive branch surveillance, but it did so to “strike[] a fair and just balance between protection of national security and protection of personal liberties.” The government’s reading of § 1806(f) fits that schema exactly. In that provision, Congress permits the government to use electronic surveillance evidence in court against a litigant while withholding materials related to that surveillance from that individual in the interests of national security. But in the same breath, Congress also allows an aggrieved person to challenge the government’s use of such evidence and have a court evaluate the lawfulness of the government’s actions.

Far from giving the government exclusive control over challenges to surveillance, we think this reading of § 1806(f) acknowledges the court’s role in preserving the compromise Congress made between individual rights and national security.

But the compromise requires more from plaintiffs like Wikimedia, the court continues. And it goes farther than shutting down legal challenges of FISA-approved surveillance. Sometimes, the government just gets to win.

[T]his problem isn’t unique to FISA. Every state secrets case presents the possibility that a plaintiff will be denied—in the interests of national security—a remedy available by law.

And no one gets to ask questions about secret surveillance techniques because they’re secret, says the Fourth Circuit, closing the loop on the state secrets discussion and terminating Wikimedia’s lawsuit for the second time.

Wikimedia claims that the NSA is acquiring all communications on a chokepoint cable that it is monitoring. There’s simply no conceivable defense to this assertion that wouldn’t also reveal the very information that the government is trying to protect: how Upstream surveillance works and where it’s conducted. Indeed, “the whole object of [Wikimedia’s] suit and of the discovery” is to inquire into “the methods and operations of the [NSA]”—“a fact that is a state secret.”

The district court thus correctly held that, in the face of the state secrets privilege, Wikimedia can’t continue to litigate the Wikimedia Allegation to support standing.

This probably isn’t supposed to come across as a judicial shrug, but it sure feels like it.

To sum up, evidence of the Wikimedia Allegation establishes a genuine issue of material fact as to standing, but the state secrets privilege prevents further litigation of that issue.

The house wins. And it didn’t even have to show its cards. Wikimedia may actually be able to allege an injury that gives it standing, but it can’t do that without the government discussing its surveillance programs, which it won’t. And the court can’t make it do it.

The subject says it all.

As has been said many times, the law, the constitution and the people mean next to nothing in the USA now. The security services are everything, especially when courts back them every time and throw everything else out the window!

The so-called judges have once again taken written law into their own hands, and have unilaterally appended the words "unless a spy agency is involved" to the end of the 4th amendment.

If the government is unwilling to participate for reasons of secrecy, then a summary judgment should be issued in favor of the plaintiff. That would maintain the secrecy and eliminate the inherent conflict-of-interest that allows the government to violate the Constitution while preventing any action against them.

Something something gave up all sorts of rights to be safe and now are shocked just shocked that we no longer have the rights we thought & there is no way to reverse the course.

Victim: We have good evidence that our rights are being violated.
Judge: I want more, NSA would you like to provide evidence that you’re violating their rights that can be used against you?
NSA: Ahahahaha, no.
Judge: Well, you heard them, they’re refusing to provide the evidence that I required you to provide, so lawsuit dismissed.

Perhaps not summary, but if the defense declines to present evidence to rebut the plaintiff’s allegations, the trier of fact is entitled to presume the allegations are true.