Techdirt's think tank, the Copia Institute, is working with the Trust & Safety Professional Association and its sister organization, the Trust & Safety Foundation, to produce an ongoing series of case studies about content moderation decisions. These case studies are presented in a neutral fashion, not aiming to criticize or applaud any particular decision, but to highlight the many different challenges that content moderators face and the tradeoffs they result in. Find more case studies here on Techdirt and on the TSF website.
Clearview Suffers Brief Bout Of Better Judgment, Drops Subpoena Demanding Activists' Communications With Journalists
Misquoting Einstein Is Fast And Stupid, But Not Accurate

Summary: Content moderation questions can come from all sorts of unexpected places — including custom soda bottle labels. Over the years, Coca Cola has experimented with a variety of different promotional efforts regarding more customized cans and bottles, and not without controversy. Back in 2013, as part of its “Share a Coke” campaign, the company offered bottles with common first names on the labels, which angered some who felt left out. In Israel, for example, people noticed that Arabic names were left off the list, although Coca Cola’s Swedish operation said that this decision was made after the local Muslim community asked not to have their names included.

This controversy was only the preamble to a bigger one in the summer of 2021, when Coca Cola began its latest version of the “Share a Coke” effort — this time allowing anyone to create a completely custom label up to 36 characters long. Opening up custom labels immediately raised content moderation questions.

Some people quickly noticed some surprising terms and phrases that were blocked (such as “Black Lives Matter”) while others that were surprisingly not blocked (like “Nazis”). 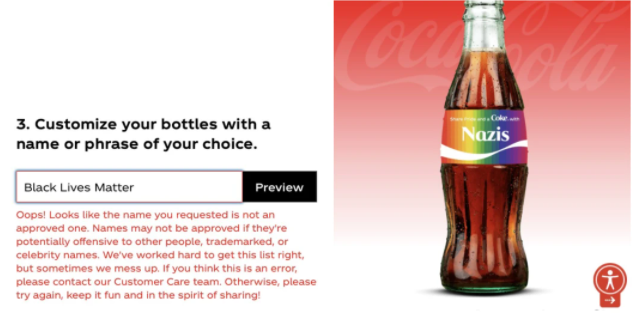 As CNN reporter Alexis Benveniste noted, it was easy to get offensive terms through the blocks (often with a few tweaks), and there were some eye-opening contrasts:

For example, “Black Lives Matter,” is blocked. But “White Lives Matter” isn’t. Coke included a special rainbow label for pride month, but you can’t write “Gay Pride” on the bottle. However, you can write “I hate gays.” “Hitler” and “Nazi” are banned, but users can customize bottles with the phrases, “I am Hitler” or “I am a Nazi.” — Alexis Benveniste

The fact that “I am Hitler” was allowed while “Hitler” by itself was not suggests that Coca Cola was using a filter that included blocking entire phrases, rather than just a list of words (enabling simple adjustments to get through — which might explain why “Nazi” is blocked but “Nazis” apparently was not).

Coca Cola insisted that the automated blocks in its web tool were not the only system of review, just the first filter before being passed on to production, and that “actual bottles are not made with words that are inconsistent with the program’s intent.”

Resolution: Coca Cola admitted to CNN that the process is constantly being adjusted. “We’re continuously refining and improving our Share A Coke personalization tool to ensure it is used only for its intended purpose.” The company also noted that it added language to the preview screen to say that “proposed language may require further review.” The company did not explain why terms like “Black Lives Matter” were not approved.

Hey Koby, I’ll buy you a coke if you turn in your homework a day early.

Reminds me of the time Mountain Dew held an online contest in 2012 named "Dub the Dew".

It left the naming open for Internet submission and polling. Unmoderated of course.

I’m sure you can imagine the winners.

And what about foreign words? I was able to get POCHVA (sheath/vagina) printed on my can of Coke. 😀

I think we see now why "Black Lives Matter" is banned. Maybe Techdirt can file a trademark on White Lives Matter to see how long the site takes to block it? (I don’t think it actually has to stand up in court … trademarks are all about the fight; there is no truth)

Disclosure: Not Koby, but I’ll give it a whirl…

What’s wrong with this? Coke is just exercising it’s property rights. Why should they allow just any message to be on their labels? Coke owns their labels.

If you want to print a message that Coke doesn’t like, open your own soda bottling company, create a recipe that is loved worldwide, establish your own shipping partners, and send out your own vending machines. Simple. Quit demanding that third parties exist in the same world with a message that they hate.

Hitler did nothing wrong.
Gushing Grannies.

See also: Know your Meme – Dub the Dew
I don’t want moderation so find your own damn links.

4chan did it, Bronies did it, 4chan drove the Bronies out of the top 10, then the actual hacking of the site adding a rickroll & 911 conspiracy theories.

Anyone who puts one of these things forward as a marketing idea needs to be fired.
The internet will always win, you aren’t smarter than the last 7 idiots who did this same thing & ended up shutting it down after Hitler came to town.
The execs who approved this going forward should have to return any bonuses they earned because this was stupid & all they needed to do was ask a 14 yr old to look for any flaws.

Well, 4chan did have all top 10 winning names. The marketing team had the final say on what their drinks actually got named so classy names such as "Diabeetus" didn’t get their own Mountain Dew flavor sadly!

Or, you know, just print a label at home and glue it to your bottle.

Surely pasting your own label on Coke’s distinctive bottle would lead to some massive trademark suit. You can’t really think peasants have the right to say things!

How well? A plumber might order up a bottle of PIPES and get the entire Coca-Cola company sued for trademark dilution.