Study Says Official Count Of Police Killings Is More Than 50% Lower Than The Actual Number
This Week In Techdirt History: October 10th – 16th

The last time we found niche grocery chain Trader Joe’s playing intellectual property bully, it was over one enterprising Canadian man who drove across the border, bought a bunch of good stuff from Trader Joe’s, and then resold it at his Canadian store called “Pirate Joe’s”. While that whole setup is entertaining, Trader Joe’s sued for trademark infringement in the United States, which made zero sense. The store was in Canada, not the States, reselling purchased items is not trademark infringement, and Trader Joe’s was free to open up Canadian stores if it chose.

Fast forward to the present and Trader Joe’s is trying to stretch trademark law yet again, this time to go after one man’s website that is selling parody t-shirts with a picture of Joe Biden and the moniker “Traitor Joe”, all mocked up to look like the store logo. Trader Joe’s sent a threat letter to the man, Dan McCall, who was represented by friend of the site Paul Alan Levy.

I recently had the pleasure of representing Dan McCall again — author of such wicked parodies as NSA – the Only Part of Government That Actually Listens (we got to sue the NSA for a declaratory judgment of noninfringement); Ready for Oligarchy (over which we came with hours of filing suit against Hillary Clinton’s exploratory committee); and Bernie Is My Comrade (Sanders’ committee had the smarts to retract quickly). Last week, I sent a response to a demand letter sent on behalf of Trader Joe’s from a BigLaw attorney lawyer who, considering his claim to be a “seasoned intellectual property litigator,” really should have known better than to subject his client to the Streisand Effect.

You can see the image in question below. 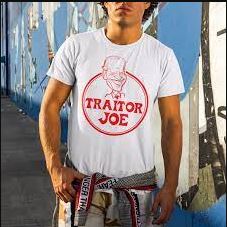 I’ve included Levy’s response embedded below so that you can read it in full. Now, if McCall sounds at all familiar to you, it’s because he’s made a habit out of annoying large institutions by creating parody logos of their branding. Hillary Clinton, Bernie Sanders, the NSA, and DHS have all come calling for him at some point. This is part of the context of Levy’s note that competent counsel really should know better than to send this threat letter: McCall and Levy have been through this before and they’ll get through it again.

As to the merits of supposed trademark infringement, well, the response letter does a fairly thorough takedown of any such arguments. Levy starts off by pointing out to Trader Joe’s that literally nobody is going to think it endorsed or produced this t-shirt. In fact, the company’s own threat letter notes how this puts the company in a bad light, so why would it also think the public would think the shirt came from Trader Joe’s?

But the real trump card in all of this is that the t-shirt is protected speech as parody.

Trademark law aside, McCall’s use of the image to comment on the President of the United States, while playing on the name of a leading grocery store chain, is speech squarely protected by the First Amendment. Consequently, any application of trademark law to quash such uses would be highly suspect. Although McCall’s products are sold, their contents are noncommercial speech, which qualifies for full First Amendment protection.

There’s a bit more in there, including an odd copyright claim over some of the imagery and the fact that Trader Joe’s invoked the DMCA against McCall even though his company, Liberty Maniacs, is not an interactive website allowing user input, but that’s more icing on the cake type stuff. What is made clear in all of this is that Trader Joe’s has a legal team that is making quite spurious threats that would be highly likely to be defeated in court.

The sad thing is that I imagine more often than not legal thuggery of this sort works simply because the target either can’t afford a lawyer or more likely can’t afford to fight back, as even if they win they’re still going to be out a hefty amount of money. It doesn’t do you any good to be vindicated in court if the process leaves you bankrupt, something you can be sure is very well understood and exploited by those that would weaponize the legal system like this.

But the real trump card in all of this…

I see what you did there!

I wouldn’t be a bit surprised if McCall was hoping Trader Joe’s would sue. Given their past litigious history it’s just like waving a red flag in front of a bull. Nothing like the Streisand Effect to get free publicity and boost sales!

I would eat Mr. Berliner, he sounds so delicious!

Maybe they should go a bit lighter on the paprika, https://www.youtube.com/watch?v=XOEniYBxdjY

So the group goes around looking to get sued… then when they get sued the anti-copyright zealots champion the cause of "Liberty Fanatics" because they believe literally any business attempting to protect their IP as the US law demands is a disgusting immoral drain on society.

My understanding of these predictable lawsuits are that, regardless of what might be actually permitted (or not) under copyright law, in practice, corporations will pursue these actions so as to demonstrate their willingness to do so, thus:
1) Discouraging others from taking the risk of using their IP, even if fair use
2) Drawing a line that gives them the appearance of distancing themselves from a thorny political stance without actually taking one one officially

And of course we can’t possibly change course now.
It would be wrong to demand that a case have actual merit before a lawyer puts his name on it & if he does then he should be punished for failing to do his job.

The lawyers job isn’t to make the client happy, the lawyers job should be to keep the client from making a flaming ass of themselves in a court of law on the record with a case that is a non-starter.

Imagine a world where Mr. Levy could just forward a copy of this insane rambling demand pretending to be a legal document to the state bar where biglaw douche is & the bar actually do something to the douche.

The lesson humanity has failed to learn from time & time again is that if you let them get away with it enough (even with good intentions) eventually they will shoot every dog on sight & every dark skinned driver who twitches the wrong way will end up dead because we always defer to them.

Lawyers are too expensive for their billable hours to be written off as part of a marketing campaign.·

I was hoping it was this, to be frank. https://www.youtube.com/watch?v=nTx_1rli-Lw

Traitor Trump seems more appropriate. I’ll take a t-shirt with Traitor Tower on it. Now we know what the big T stands for.

I actually find neither very funny albeit for somewhat different reasons. Name-calling cheapens the political discourse, and we have had more than enough of that already.

But then funny and legal are different things, even though there is an increasing and surprisingly effective tendency to employ absurd legal filings as performative entertainment for fund raising purposes.

Wait no, a big T tower is where the Teen Titans live. That’s likely to cause confusion!

"protect their IP as the US law demands"

Last time I checked, US copyright law explicitly allows parody, and thus demands them NOT to sue (or at least accept that there’s a fair use provision built in that makes it unlikely that they will win).

"Name-calling cheapens the political discourse, and we have had more than enough of that already."

It’s not as if we knew Trump had been on his fiscal last legs before russian money started flowing through all of his enterprises – right before this "self-funded man" began a presidential campaign largely funded by shady russian oligarchs and loans guaranteed by the russian state bank.

It’s not as if Trump in his stint as president decided to abandon a US middle-east presence and influence the nation had spent over twenty years building up, handing the kurds, Syria and thus every on-ground asset to Putin in a walk-over.

It’s not as if he showed up to every meeting with his NATO allies in malice and contempt while whenever Putin was around you’d think he was on Putin’s PR staff, the way he was singing praises.

It’s not as if he went the distance trying to overturn his own government on his way out, short of actually marching in front rather than shouting incitement from the rear.

No, we can’t call him a "traitor" because the US has a very specific and narrow definition of that term. But we can certainly state that Russia has never had a better US president than Trump, ever.

Are you sure that you are employing "It’s not as if" in a manner conveying your intended meaning rather than the opposite?

I suspect there was an implied /s tag there…

Damn, I forgot the /s. I must have come off sounding like Rudy Giuliani…:/

It could be both. They could be taking a political stance where they want to distance themselves from a certain political ideal without coming straight out and doing so. It could also be a lawyer who is perfectly happy to take on attacks on fair use if they can bill for the hours. Those are not mutually exclusive possibilities.