Digital Democracies: How Liberal Governments Can Adapt In The Technological Age
Facebook Whistleblower Testifies Before 'Grand Committee On Disinformation'; Which Includes Countries That Lock People Up For Criticizing The Gov't

A recent report from the Institute For Local Self Reliance took a look at how transparent U.S. ISPs are about broadband prices, line restrictions, and hidden surcharges. And the results are about what you’d expect. As in, most U.S. ISPs do a fairly terrible job (quite intentionally) of making it clear how much you’ll pay for broadband, what your upstream and downstream speeds are, and whether there’s any hidden restrictions or fees you’ll face once you sign up.

Why? For one, big ISPs don’t like making it easy to do direct price comparisons, lest people clearly understand the real impact of limited competition and regional market failure. They also routinely engage in false advertising where they advertise one lower price, then hit you with a bunch of bullshit fees. Big ISPs also tend to hide anything that doesn’t make them look good or could showcase their network underinvestment, such as pathetic upload speeds: 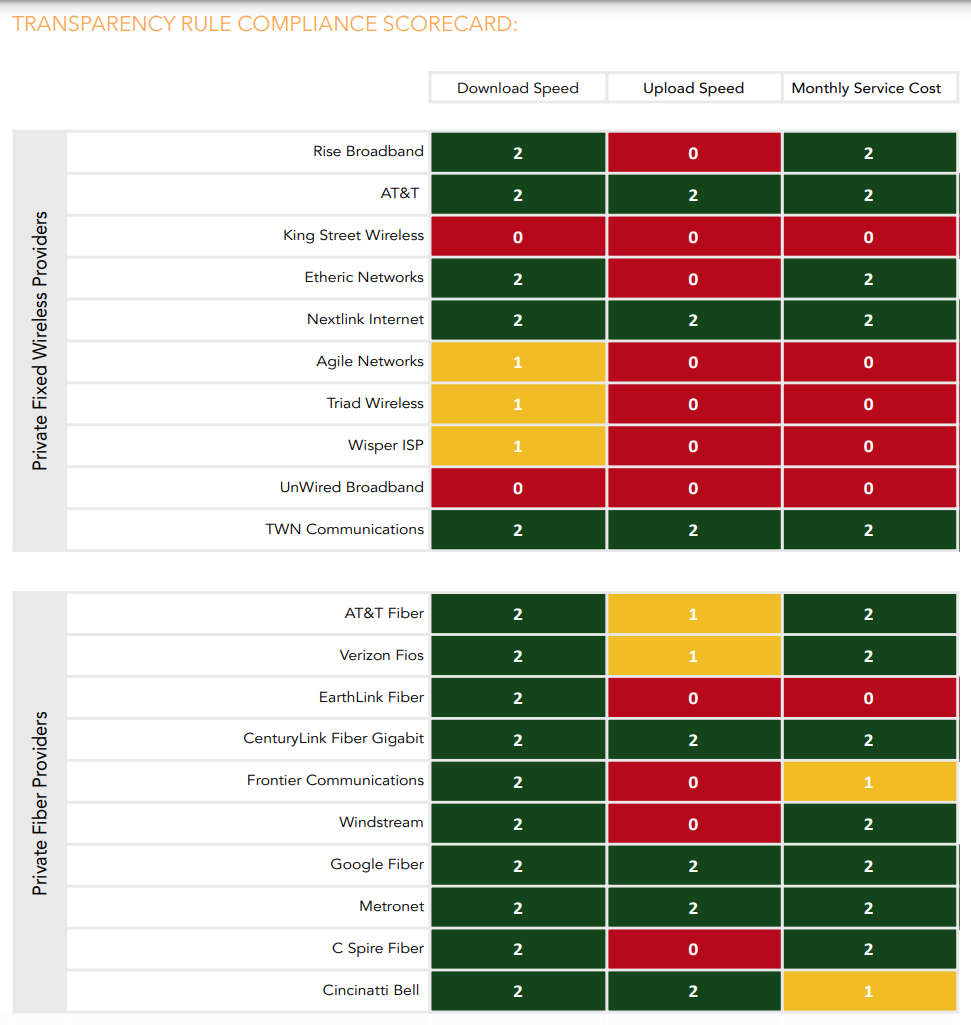 This is, the report notes, much less of a problem with local community broadband networks. Previous studies out of Harvard had noted community broadband generally offers lower, more transparent prices than large ISPs, and that’s showcased again here:

Again, this isn’t just a failure of competition, but a failure of regulatory oversight and telecom policy. The FCC’s 2015 net neutrality rules included a provision requiring that ISPs be transparent about pricing and line restrictions. And while the net neutrality aspect of their 2015 order was repealed by the Trump FCC, the transparency component was not. Still, despite the transparency rule having now existed for six years under two different political parties, the report notes how nobody at the FCC has bothered to enforce it:

“The Transparency Rule, however, is largely unenforced. It is commonly accepted that without effective government regulation or competitive market pressure, ISPs are in a position to abuse their power. The Internet access industry is governed neither by regulation nor market pressure in most communities. Because providers donâ€™t have to answer to regulation or worry about their customers switching providers if they offer less than satisfactory service, providers are rarely held accountable for information that is missing or hard to find. Were providers held accountable for making accessible disclosures, customers could less easily be exploited.

The broadband component of the recently-passed infrastructure bill added some additional language requiring that ISPs provide a sort of “nutrition label” for their connections clearly disclosing all restrictions and sneaky fees. But again, rules are only useful if they’re enforced, and the FCC historically under both parties… just hasn’t bothered doing so. Big ISPs like AT&T aren’t just politically powerful campaign contributors, they’re effectively tethered to law enforcement and intelligence systems, reducing any incentive to hold them accountable for pretty much anything of note.

Comments on “Report: US ISPs Aren't Transparent About Prices And Speeds, And Regulators Generally Don't Care”

Wow,
Anyone know a police officer or Citizen that would like to wonder Around in a car and test all the links, and how far they go out, for a reasonable wage?
And then watch some of them get a Great payout by the Corps to not do the job properly.
Then we get the good ones to report this and they can keep the bribes, which should be very good.

but the truth wont hurt them so why even mention this? until members of Congress grow pairs, do what is needed to help the people they represent rather than just the companies that give campaign contributions, nothing is ever gonna change! the companies (and inparticular, the bosses of those companies) are gonna continue to make massive killings, in more ways than one and the people are just gonna continue to be kicked in the nuts!!

I was wondering where the like of comcast and charter were, but i see they are just in another table, as cable broadband.

Digital Democracies: How Liberal Governments Can Adapt In The Technological Age
Facebook Whistleblower Testifies Before 'Grand Committee On Disinformation'; Which Includes Countries That Lock People Up For Criticizing The Gov't
Follow Techdirt