Report: U.S. Has 9th Most Expensive Broadband On The Planet

We’ve long illustrated how U.S. broadband is dominated by regional monopolies, which, in turn, are often coddled by state and federal governments (aka corruption). That broken market (and regulatory capture) results in all manner of problems, from spotty coverage and slow speeds, to repeated privacy violations, net neutrality violations, and some of the worst customer service of any industry in America (no small feat if you think about it).

Of course, it also results in the U.S. having some of the most expensive broadband anywhere. A new report by CompareThe Market finds that U.S. broadband is the 9th most expensive country for broadband in the world, with people paying an average of $66.13 USD per month. That’s in line with prices paid in such countries like Honduras and Guatemala: 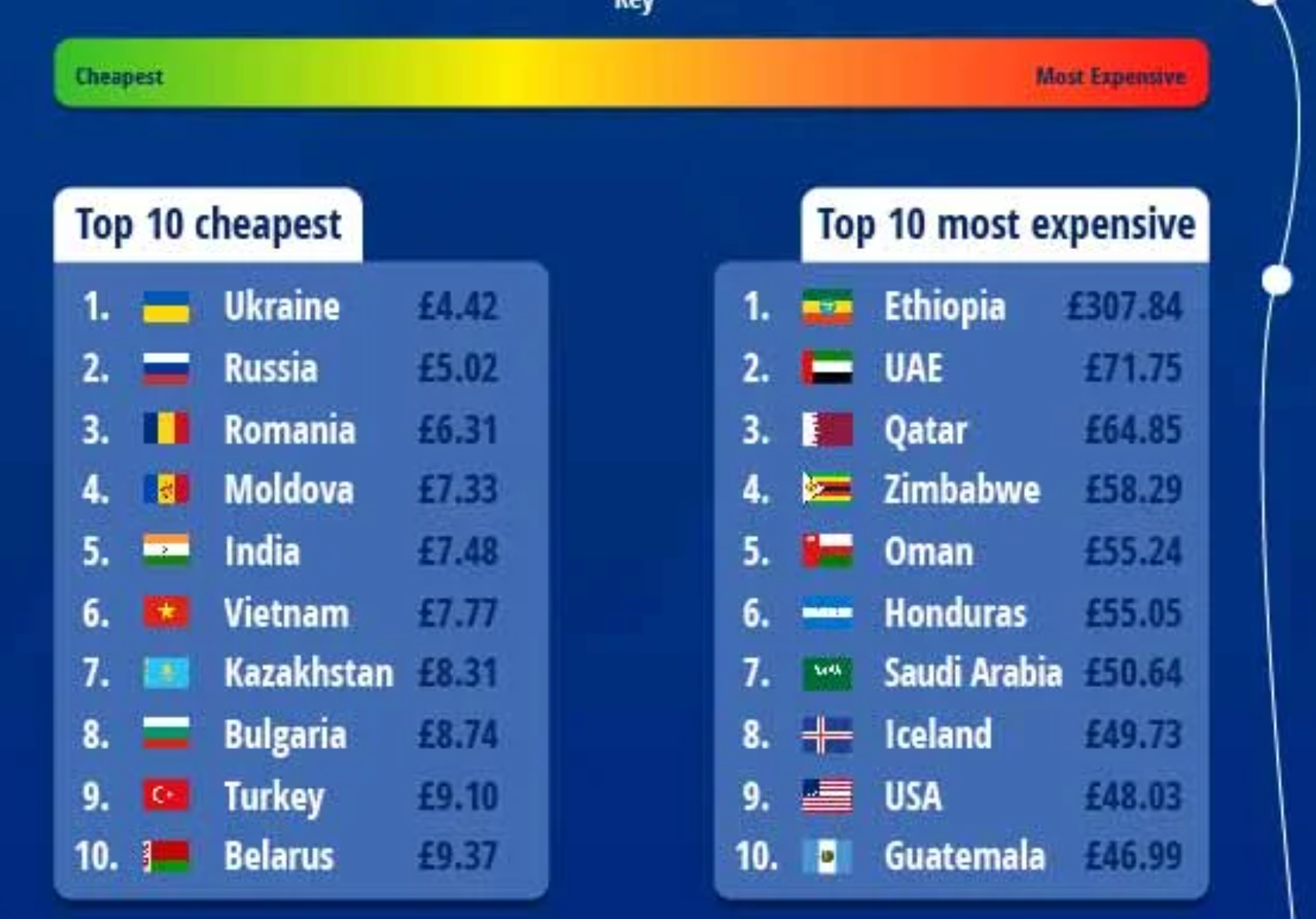 Like so many reports, the data breakdown just dumps this information at the readers’ feet without explaining why U.S. broadband consistently ranks among the worst broadband nations in the world (whether we’re talking about speed, price, or availability). And while for years the industry (and those paid to apologize for regional monopolization) tried to argue that it was simply because the U.S. was so big or because U.S. ISPs are saddled with too much regulation, that’s never been true. The U.S. broadband market isn’t free. It’s heavily monopolized and overseen by corrupt policymakers (regulatory capture).

In 2021 the issue is no longer geography, or even technology. It’s the fact that we’ve let a handful of giant telecom and cable monopolies not only cordon off regional fiefdoms, but all but dictate both state and federal telecom policy the vast majority of the time (including literally writing state laws and local ordinances). Instead of tackling this problem head on, feckless U.S. policy makers (enabled by a lazy and timid press) generally mumble about the causation free “digital divide,” then repeatedly just throw more money at the problem.

When that doesn’t work, everybody just shrugs and repeats the process the next time data shows the U.S. continues to be violently mediocre in broadband. There’s a vast coalition of well-funded organizations, individuals, think tanks, consultants, and companies tasked with ensuring this dynamic never actually changes. As the data repeatedly attests, they’ve been winning that fight for the better part of a generation now.

Comments on “Report: U.S. Has 9th Most Expensive Broadband On The Planet”

I don’t think this really gives the whole picture. It would be better to show the price as a percentage of average monthly income.

Average Income is tricky as well. I mean, there’s this anecdote about how there are a dozen poor people in a bar, but in walks Jeff Bezos, then Average Income increases dramatically.

Is it a perfect comparison? No, but it is good enough to highlight where prices are inflated unnecessarily for various reasons.

… good enough to highlight where prices are inflated unnecessarily for the sake of greed and avarice.

there’s this anecdote about how there are a dozen poor people in a bar, but in walks Jeff Bezos, then Average Income increases dramatically.

You’re right! That IS mean. Perhaps we’d be better talking about the median instead.

Aw, heck. That’s problematic too, when you consider Starlink coverage of medians…

Okay, how about a mode…

Statistics, the study of mean deviants.

We have the most expensive internet when you can even get it. I manage internet connection contracts for 60+ locations at our company and I have the joy of occasionally having the local monopoly internet provider just not care. Below is an actual email I’ve received when asking about getting an internet connection installed into a building we own where I knew I would probably need to pay a fee to get services trenched in. Another fun note with this address is according to the FCC broadband map this location meets their definition of serviced by that ISP.

"This location currently is unserviceable by [ISP]. However, itâ€™s very close to a few locations that are serviceable. At the moment we are unable to do a survey to verify what would be needed/ costs to trench and bring the lines to this location, due to the distance from the nearest tap."

… so the culprits for our U.S. problem here are identified as either:
"feckless U.S. policy makers (enabled by a lazy and timid press)" or
"a vast coalition of well-funded organizations, individuals, think tanks, consultants, and companies" .

And more importantly, what would be a credible solution to counter those causative culprits ?

Decades of us merely fretting about this monopoly problem have obviously accomplished nothing. Solutions, please.

There is no "either", they are both guilty. One enables the other and vice versa.

OK, then if both are the cause of the problem — what do you see as a fix to their destructive monopoly-sustaining behavior?

Fix? One step would be to outlaw lobbying and campaign contributions from organizations and corporations. But that ship sailed long ago, the US is mostly saddled with politicians who are more interested in power and money than governing and they will never give that up willingly.

"And more importantly, what would be a credible solution to counter those causative culprits ?"

Seriously, as long as the winning candidate will be the best funded the result will always be politicians who see themselves as employed by the biggest wallet rather than the voting citizenry.

There are other things as well – like voting primarily for a party rather than an individual thus largely removing the personality cult and the gab-gifted grifters from the selection process, and of course ranked-choice voting to make sure you have a shot at stepping away from a mere two-party system.

But money must be removed from politics first, or everything else just becomes more icing on what is fundamentally a turd.

add in that it has the worst service, the worst customer service and the poorest deployment when it comes to upgrading, the best rewarded CEOs and the most gutless politicians when it comes to getting any changes done (unless it’s to improve surveillance on the public and/or allowing the entertainment industries greater and greater powers for self-preservation and victimisation of citizens!). can’t be bad for the leading nation on the Planet!

seriously, is this type of statistic associated with the u.s. any surprise?! Considering how, over so many countless generations, those whom are expected to be Noble leaders were/are in fact, raised to REMAIN the Selfish children they were born,… duh.
Oh. and in case ANY need a specific example, all one need do is look at the infantile actions and mentality of the 45th President of this country,…

Oh look! we’re the 12th — courtesy of Guatemala and Bolivia.

.
Aside:
Does anybody know why Switzerland’s Internet service is so expensive?
And comparing Norway to Sweden and Finland seems to rule out geography as an excuse for exorbitantly high broadband prices)

Norway is generally more expensive than Sweden and Finland. Also, both Norway and Switzerland have the added bonus of a terrain that can make deploying infrastructure between 2 nearby towns take a route that’s 5 to 10 times longer than the actual distance between them because fjords and alps are in the way.

"Does anybody know why Switzerland’s Internet service is so expensive? And comparing Norway to Sweden and Finland seems to rule out geography as an excuse for exorbitantly high broadband prices)"

As Rocky has it, the terrain doesn’t help. Norways coastline looks like a fractal with the fjords in places almost cutting the country in half. It could accurately be described as a string of peninsulas connected to a rather thin spine. So the cabling has to zig-zag across some rather impressive distances. Same holds true to some respect for Switzerland although there it’s mountains voiding the ability to run cables in straight lines.

Meanwhile Sweden is basically long and relatively flat stretches of hilly plains and forests. Pick a compass heading from the southern tip of the country and start rolling out the cable trunk and you’ll not hit a serious terrain snag for about 500 km (750-800 miles).

After considering the expenses in material and labor cost then comes state subsidies, common carrier lend-lease agreements and all the other regulations which incentivize or don’t incentivize joint ventures in building core infrastructure…it all affects the end price as it determines how much competition there will be about broadband access.

Suffice to say the unregulated markets of the US have turned the place into a third world where infrastructure is concerned in general and it’s getting worse all the time.

Listing just the price without saying what it buys seems to really reduce the value of the number. Anecdotally most of my American friends have higher bandwidth speeds than most of my Canadian friends.
And I’m pretty sure that the Australian speeds are also going to be gimped because of the high international data rates.

"Anecdotally most of my American friends have higher bandwidth speeds than most of my Canadian friends."

One interesting data point here would be whether the broadband promised is the same as the one delivered.
Example; I’m on a 100/10 MBit connection…and every month if I can deliver a snapshot of a speedtest where the real-time connection dips below 50 MBit at any point three times then I don’t have to pay the broadband fee that month. The ISP’s in sweden like to provide a speeds guarantee.

Meanwhile what I keep reading from the US is about cases where the "100 MBit" linkage turns out to be effectively 10 Mbit most of the time or where latency and jitter make the link largely unusable for anything but browsing.

Because the US is almost unique in that there is no consumer law preventing an ISP from overselling their bandwidth fifty times over – which goes a long way towards explaining why the telcos there focus so hard on not being forced to suffer net neutrality or common carrier regulations which would block them from shaping traffic priorities to preferred customers.

So about Canada before we can judge the effective speed of their network we’d need to know whether the canadian ISP’s are overselling bandwidth at the same proportion as their US peers or whether they are forced to offer slower broadband because they’re not allowed to promise what they can’t deliver.