Stories about: "dar.fm"
Expand All Posts Collapse All Posts

from the what technology allows dept

Michael Robertson has a long history of pushing the boundaries of copyright law, by going where the technology allows, even if the law hasn’t quite caught up yet. As such, he frequently finds himself on the wrong end of legal actions from legacy players who hate being disrupted. Last year, we wrote about his DAR.fm effort, which basically is an online DVR for broadcast radio. He’s now taking that even further, with the launch of UberTalk, an online directory of what’s on radio right now (and in the future). You know your basic online (or on screen) TV guides? Yeah, UberTalk is that, but for radio — with the convenient ability to play… or to record and time shift anything you’d like. 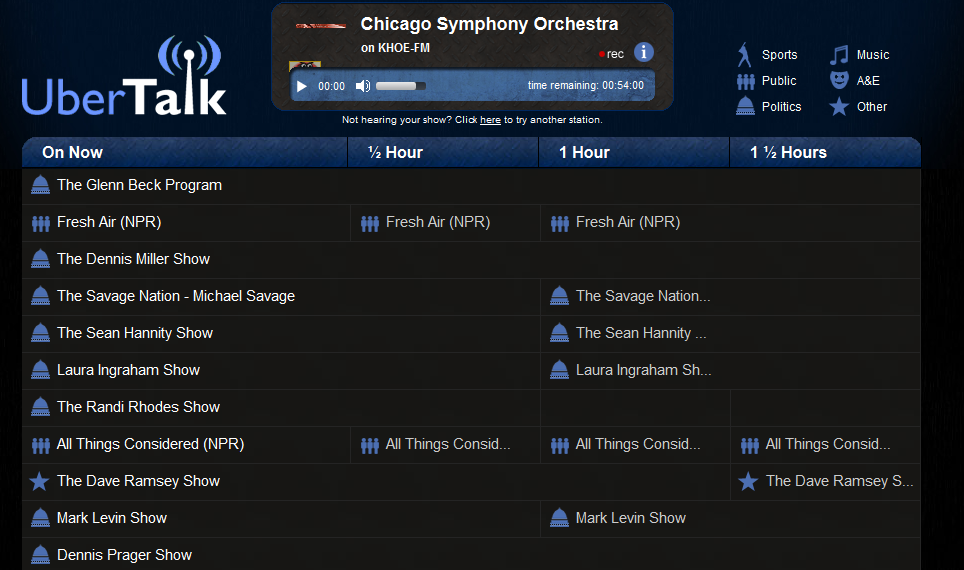 Given the state of radio today, this seems really, really useful. But, is it legal? We’ve already seen legal threats pointed at DAR.fm, and I can’t imagine that all the broadcast folks will like this either — even though it only increases the value of their product by making it more easy to find and useful.

What we’re seeing, yet again, is how the technology allows for something really useful that adds value to both the content and for the users. And yet… copyright law makes it very, very difficult to pull off. Why? Because copyright law is purposely built around keeping the status quo, not about encouraging innovation. So you have yet another clear case where it seems like copyright law is holding back “the progress” rather than helping to speed it along.

Earlier this year, we wrote about Michael Robertson’s latest project, DAR.fm, noting that he was tempting copyright lawsuit fate again. DAR.fm is basically an online DVR for radio. It lets you record and listen to all sorts of online radio programming. As we noted at the time, it seemed inevitable that someone would challenge the legality of this — but it seemed like the Second Circuit’s ruling in the Cablevision online DVR case at least presented him with a case that supported his general view that such time shifting of radio, even if done remotely, is legal.

Either way, it appears he’s received his first cease & desist, which comes from Univision and is embedded below. Robertson is making his case against Univision publicly, first pointing out that it seems to be reacting the same way the TV industry did to TiVo and ReplayTV:

Ten years ago, ReplayTV and TiVo burst onto the scene introducing the digital video recorder (DVR) to the world. Immediately some predicted the end of the TV business because people could fast-forward through commercials. Lawsuits put ReplayTV out of business (in spite of superior technology). Eventually cooler heads prevailed and the technology thrived to the point where nearly half of American households have a DVR. Consumers could, for the first time, enjoy their favorite programming at a time convenient for them. Thanks in large part to the DVR, TV viewing is up 40% over the last decade which is especially notable given that competition for consumer attention has stiffened due to internet browsing, Skype, video games, and social networking.

You would think that with this backdrop radio companies would welcome DVR technology into their own industry and many probably will but at least one doesn’t – Univision.

He goes on to make the case that such time shifting is quite common and legal. In fact, he points out that Univision is more known for its TV stations, and are they really arguing that a DVR is legal for video, but a DAR is not for audio?

While recording broadcasted material may be new to radio, it’s not new to society and surely Univision must know that. Nearly 50% of US households have a DVR today. Univision’s TV business dwarfs its radio business. It’s likely that millions of people are making recordings of Univision TV shows as I write this. And some may be blinking their eyes or listening from another room transforming these video recordings into audio recordings. Similarly, internet users can capture online articles for later viewing using popular services like Readitlater and Instapaper and some may be doing that from the Univision.com website. If it’s legal in those channels it only makes sense that the same functionality is legal for radio.

In their demand letter Univision says that no court has addressed the legality of “precisely” the kind of service offered by DAR.fm. Well of course not the PRECISE service, but darn close. The case is called Cartoon Network v Cablevision. Cablevision wanted to offer a remote DVR service and media companies sued them alleging copyright infringement. (You can read assessment of this critically important case here.) Courts eventually ruled that a centralized recording service did not require a license from media companies and was not a copyright infringement. Cablevision now commercially offers this service under the name DVR Plus. Other companies have begun offering online recording services.

It will come as little surprise that I think DAR.fm should be legal, but the courts can be funny about this kind of thing. Even though, functionally, it may seem identical to a DVR, having it actually go to court is a crapshoot. Still, if Univision is smart, it’ll back down on this. Making their stations and programs more difficult to listen to hardly seems like a compelling business strategy.

from the power of the possible dept

I used to joke that every company founded by Michael Robertson had a very simple “marketing plan”: get sued by someone big. So many of his startups ended up in lawsuits with big names, which helped generate even more attention for them. But, of course, part of the reason for that is that he continually stretches the technology to do what it obviously can and should be able to do, well before the law (and legacy companies) adapt to handle such things. It’s why many people have been pointing out that for all the hype around Apple’s new “Music Match” service, it sounds remarkably like what Robertson did a decade ago with MP3.com.

Speaking of Robertson and lawsuits, Robertson’s MP3tunes.com is still engaged in its big legal fight with EMI, which may help determine the legality of online music locker services, but Robertson clearly isn’t waiting around for that. Built on top of MP3tunes.com, he’s also launched DAR.fm, which is effectively an online DVR for all internet audio/radio. You can just set up what you want to record, and the site records it and stores it in an MP3tunes locker. At first I didn’t think there was all that much interesting here — the world already has podcasts, and did it really need a way to record online radio separately? However, things get a bit more interesting when you dig into the details, and you realize there’s an interesting copyright situation… and a potential lawsuit waiting to happen.

As David Pogue pointed out in his review of DAR.fm, beyond just recording the shows, it has an interesting feature:

Actually, maybe this part is even better: Many radio stations transmit the names of the songs and bands they?re playing. DAR.fm captures that information and detects song breaks. In other words, if you record a day or so of a music station, you?ve suddenly got a tidy list of songs, identified (and sortable) by title or band. You can listen to individual songs, skip the turkeys and otherwise enjoy your totally free song collection. It?s crazy cool, like a hybrid of iTunes and satellite radio.

Of course, there have been desktop software products that have done the same thing for ages. But automatically dumping the mp3s into a music locker, which — unlike the Google’s and Amazon music locker that have launched recently — actually lets you download the mp3s in your locker, is something the labels surely won’t like. In fact, lots of folks are predicting that lawsuits are on the way:

Internet entrepreneur Michael Robertson has just launched his own economic stimulus program. He?s going to provide jobs for a lot of lawyers.

That?s because Robertson has created a new online service called DAR.fm, which delivers a new way to listen to Internet radio streams. DAR.fm is a digital recorder for audio streams, capturing your favorite Internet radio shows whenever they?re broadcast so you can listen to them later. It works, it?s wonderful, and it?s very possibly doomed, because the world?s leading music recording companies will probably come after it with every attorney they have.

But, here’s the thing: does such a service actually infringe? It’s pretty clearly established that basic time shifting, such as with a TiVo, is considered legal. Separately, with the Second Circuit’s Cablevision ruling (and the Supreme Court’s refusal to hear the appeal), many consider the idea of a remote DVR to now be legal as well.

What it really comes down to is that such a service has the potential to upset the record labels (and radio broadcasters as well), but that, by itself, shouldn’t be illegal. Instead this is Robertson demonstrating, yet again, what the technology makes possible, even if it’s disruptive to those who don’t realize that the distinction between a stream and a download and local and remote storage is basically irrelevant in an era of widespread broadband connectivity. But, being disruptive and demonstrating the power of technology doesn’t make you immune from lawsuits… and judges often aren’t so savvy on these issues.