Stories about: "dwolla"
Expand All Posts Collapse All Posts

Kickstarter, Etsy And Dwolla All Speak Out On Net Neutrality And Why The FCC's Plan Is Dangerous To Innovation

During this open comment period for the FCC’s proposed rulemaking on net neutrality, it’s been great to see hundreds of thousands of comments go in to the FCC on the matter. It’s also been fantastic to see that a number of innovative startups have decided to speak out on how important an open and free internet is for being able to build their businesses, to innovate and to compete on the modern internet. They also point out that the current plan from Commissioner Tom Wheeler would put that all at risk. Here are three interesting ones worth mentioning.

First up, is Kickstarter. CEO/co-founder Yancey Strickler wrote a great opinion piece for the Washington Post along with a blog post highlighting the company’s actual FCC filing, which is similar to the WaPo piece. Here’s just a bit of it, but gives you a sense of why this is so important:

Kickstarter, like Wikipedia, Twitter and every other service on the Web, was built on the foundation of an open Internet. We would not exist without it. The more than 60,000 creative ideas that have been brought to life using Kickstarter — from new technologies to new restaurants to new symphonies — also depend on a free and open Internet.

Once a fast lane exists, it will become the de facto standard on the Web. Sites unwilling or unable to pay up will be buffered to death: unloadable, unwatchable and left out in the cold. It won’t be enough anymore to have a great idea and to execute it well. New entrepreneurs will have to pay their ISP tax, too.

Though Kickstarter is the largest and best-known “crowdfunding” platform, there are now dozens of similar sites out there. Competition is good. It inspires a better experience for customers. We’re happy to compete on the basis of our product. Under a paid-prioritization system, however, this kind of competition would end. Sites like ours would succeed or fail not on the basis of their passion or service but on whether they have the resources and desire to pay the big Internet carriers.

This proposed system would incentivize entrepreneurs to divert resources from their customers and staff and into paid deals with ISPs. Trading healthy competition for deep pockets is a terrible way to create an innovative, competitive economy.

That third paragraph is a key point that policy makers often don’t get about the startup world. People in the startup world thrive on competition — and they’re happy with an open playing field because they believe in their own ability to out-innovate others. It’s that sort of entrepreneurial spirit that makes such wonderful innovations online. The whole idea of putting up roadblocks for competitors is the type of thing that tends to happen later in a company’s life, when they’re less about innovating and expanding markets, and more about protecting their turf.

The end of net neutrality would make it easier for turf protecting, but make it much harder for the kind of open competition and innovation that drives so many entrepreneurs.

The next company is Etsy, the famed online marketplace, which has a blog post from Althea Erickson (the company’s director of public policy) and a link to the company’s comment with the FCC from CEO Chad Dickerson. Both are worth reading.

Etsy’s continued growth depends on equal access to consumers. Any rule that allows broadband providers to negotiate special deals with some companies would undermine our and our sellers’ ability to compete.

Etsy hosts over 25 million products; yet we are a low-margin business. We made a values-based decision to charge only $0.20 to list an item and 3.5% of every sale, much lower than other e-commerce platforms.

We spend considerable resources ensuring that large, high-resolution photos load quickly and efficiently. We have also considered offering our sellers the ability to create and share videos, which they could use to introduce themselves and the unique process behind their products. But our low margins would not allow us to pay for priority access to ensure our site loaded as quickly as rival sites if the FCC’s proposed rules went into effect.

If a consumer were to click on an Etsy shop and perceive delays in images loading or videos buffering, they would likely click away to another site, and our seller would lose that sale. We can’t predict the future of e-commerce or product innovations, but we want to ensure that Etsy sellers can reach buyers with the same technologies as any other online retailer.

Ultimately, the micro-businesses who sell on Etsy would suffer most if the FCC moves forward with this proposal. Most US Etsy sellers (88%) are women running micro-businesses out of their homes. Taken individually, they may be small, but together they sold over $1.35 billion worth of goods last year. The Internet has democratized access to entrepreneurship for a whole new cohort of Americans, and Chairman Wheeler’s proposal threatens to undermine this progress by creating a pay-to-play environment that gives even greater advantage to entrenched interests.

As with Kickstarter, Etsy is highlighting how the real impact will be on the users of these services, people who have been able to build tons of unique and wonderful businesses that mostly wouldn’t have been possible before. They are now — but they could be at risk if the FCC mucks this up.

The final company is payments company Dwolla, which posted its comment to the FCC from the company’s founder and CEO Ben Milne. Here’s an excerpt:

Dwolla supports an open Internet and we rely on it for the success of our business. Without an open Internet, companies, such as ours, would not be able to achieve the level of innovation made possible today. Technical discrimination and pay-to-play deals may directly harm Dwolla. We are working hard to develop our networks and scale our breakthroughs to the masses. Dwolla does not believe we can sustain our low-cost value proposition should a pay-for-priority come to fruition. We believe that there are legitimate concerns around the payments incumbents’ ability to outbid newer companies, such as ourselves, with existing cash on hand. Should we be negatively affected, Dwolla could be forced to increase transaction rates to our users, which conflicts directly with our low-cost business model. Additionally, Dwolla’s real-time payments service is dependent on the speed and reliability of payments. This impacts both us and our users. First, conducting business outside of the fast-lane would mean slower transactions and an impairment of one of our major competitive advantages; second, our users would not be able to transact amongst themselves with the same ease and assurances.

Government policy should encourage competition and innovation in payments processing, which would result in greater efficiency, speed and low-costs for businesses and consumers across the economy. The FCC should impose a rule against unreasonable discrimination, relying on Title II of the Communications Act. Technical discrimination and pay-for-play arrangements considered by the FCC will only stymie the types of innovation and creative solutions needed to address our country’s financial needs, which we believe the CFPB should encourage for the benefit of all consumers.

While so many like to pit the net neutrality fight as just a battle between internet giants like Netflix against broadband giants like Comcast, it’s stories like the three above that show it’s about much, much more than that. These three platforms have had tremendous success over the past few years, but in all three cases, the success is driven by the fact that they’ve enabled people and many thousands of small businesses and entrepreneurs to do things that simply weren’t possible before. It’s a powerful message that’s often lost in this debate.

As a reminder there are just a few days left if you want to add your own comments for the FCC to consider. And, as a further reminder, our crowdfunding campaign for our net neutrality reporting is still ongoing. If you support it, it will allow us to dig deeper and explore how the potential rules might impact companies like those above and many others as well. And, if you pledge now, you’ll have double the impact thanks to the matching funds that have been agreed to by some key donors.

The Crackdown On Alternative Currencies: Liberty Reserve Shut Down As Founder Arrested

Are governments ramping up their efforts to crack down on alternative currencies that are outside of their control? In the past, we’ve seen politicians attack Bitcoin as a form of “money laundering.” Then, a few weeks ago, ICE went after Mt.Gox, the super popular Bitcoin exchange. Now, the latest is that the founder of the digital currency site Liberty Reserve, which also dealt in Bitcoin, has been arrested and the site has been shut down. It’s no secret that Bitcoin can and is used for less than legal purposes, and it does seem like Mt.Gox and Liberty Reserve aren’t always perfect about complying with the ins and outs of running businesses that deal in currency. So these moves may be perfectly reasonable and legal. However, there is a larger concern about how these may suggest governments really taking a much harder look at things like Bitcoin, and closely targeting any company that is involved in Bitcoin exchanges with government-backed currencies.

from the no explanation dept

Update: The DHS has released a copy of the warrant, which claims probable cause to believe that Mt. Gox is engaging in money transmitting without a license.

We’ve discussed in the past how the government seems very skeptical of Bitcoin, and now it may be doing something about it. As a whole bunch of you have sent in, ICE (Immigrations and Customs Enforcement), a division of Homeland Security — best known around here for its cowboy attitude towards censoring websites with no basis — has cut off Dwolla transfers to Mt. Gox, the biggest Bitcoin exchange, preventing Dwolla from processing any Bitcoin transfers. According to Declan McCullagh at News.com:

The U.S. Department of Homeland Security confirmed it has initiated legal action that prompted the Dwolla payment service to stop processing bitcoin transactions.

Nicole Navas, a spokesperson for U.S. Immigration and Customs Enforcement, confirmed the legal action to CNET this afternoon.

Chris Coyne, from Ok Cupid, posted a screenshot of an email from Dwolla claiming that ICE had “seized” the account of Mt. Gox: 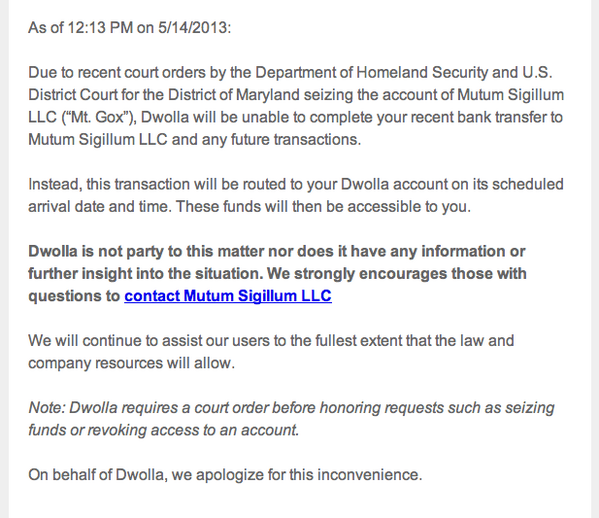 Mt. Gox, for its part, claims this is the first it’s heard of anything:

MtGox has read on the Internet that the United States Department of Homeland Security had a court order and/or warrant issued from the United States District Court in Maryland which it served upon the Dwolla mobile payment service with respect to accounts used for trading with MtGox. We take this information seriously. However, as of this time we have not been provided with a copy of the court order and/or warrant, and do not know its scope and/or the reasons for its issuance. MtGox is investigating and will provide further reports when additional information becomes known.

I would imagine there will be a lot more to this story, but for the moment details are scarce.