Stories about: "mark monitor"
Expand All Posts Collapse All Posts

You will hopefully recall the recent story we did on Darden, parent company of the Olive Garden restaurant chain, sending a legal threat letter to the man behind allofgarden.com, a site that reviews Olive Garden dishes, because the internet is a strange, strange place. At issues, according to the threat letter, was that allofgarden.com named Olive Garden in metatags in its reviews of the dishes, which you should already know is nothing remotely resembling trademark infringement or infringement upon any other types of intellectual property, either. With that in mind, Vincent Malone replied to the threat letter in a manner both well-informed of his own rights and one which demonstrated just how funny Malone is. After refusing to comply with the requests in the letter, he demanded a reply within nine days in limerick form.

His demands were not met exactly, but Darden has now responded to Malone, apologizing for the letter, promising no further action would be taken against him, blaming an IP enforcement bot for the letter, and sending him a $50 gift card. Sadly, none of this was delivered in the limerick form Malone had requested. 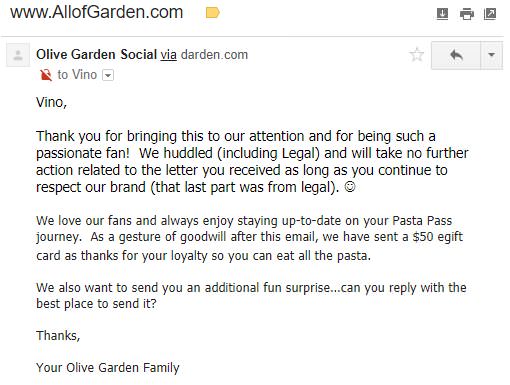 As apologies for this sort of thing go, this one is pretty good. It was apparently in further conversations outside of this letter that Malone was told of the bot, which may well be true but only demonstrates that too many companies play loose with the way they seek to enforce their rights. This story ends on a positive note only because Malone decided not to immediately back down out of fear of a much larger company, after all. It doesn’t take too much imagination to suppose that there could be, or perhaps have been, instances we don’t know about in which sites simply comply with these unreasonable demands instead of seeking limerick apologies as Malone had.

But if you thought I was going to leave you having read this post without a limerick to read, I can allay those concerns, as Malone himself decided to inform his readers of all of this in poetic form.

As of six thirty-five in the PMs
I’ve wrapped up my talks with the chieftains
They were misconstrued;
I’m not getting sued
And I needn’t write out any ™s

Yes! An official who represents Darden
Has granted me a total pardon
We’ve reached resolution
I received absolution
For daring to print “olive garden”

The source of the problem was sought
And the sender-offender was caught!
That e-mail was provided
(If you wonder [as I did])
by a prodigious, litigious spam-bot.

My sole issue with Legal’s retort
Was the prose of their written report
The demand was specific:
a reply via lim’rick
Well. At least I’m not going to court.

Techdirt has covered its fair share of idiotic legal threats over trademarks, but the following example is spectacular even for a field that has many superb examples of corporate bullying. It concerns the village of Copthorne (population 5,000), in the English county of West Sussex. It’s rather well established: it’s been around for a thousand years, and is mentioned in the Domesday Book, which was compiled in 1086. Recently, though, its village association was threatened with legal action for using the name ‘Copthorne’ on its Web site, as the Plymouth Herald newspaper reports:

A residents’ association in the village of Copthorne was threatened with legal action by a multinational hotel chain founded there — for using the name Copthorne.

Brand protection officers acting on behalf of Copthorne Hotels, which has a large hotel in Plymouth, wrote to the small local group — saying it was infringing its trademark.

As that notes, the hotel chain took its name from the village where it was founded. But there’s no sign of gratitude for that in the threatening letter the residents’ association received from Millennium & Copthorne International Limited (MCIL), which owns 33 hotels around the world:

It has come to our attention that you have registered, without MCIL’s permission or authorization, the domain name [copthornevillage.org], which includes a protected trademark of MCIL. This unauthorized use of MCIL’s intellectual property falsely suggests MCIL’s association with or endorsement of your website and is likely to cause confusion in the minds of the public that the website is associated with or connected to MCIL and the products and services offered by Millennium Hotels & Resorts. As a result, substantial damage is likely to occur to the goodwill and reputation of these trademarks.

We require that you immediately disable all content hosted at copthornevillage.org and allow the domain name to expire. Please confirm by return that you have done so within five (5) working days of the date of this letter.

After the village group sent off a “strongly-worded letter” mentioning its millennial history, that threat was rescinded. Millennium and Copthorne communications advisor Peter Krijgsman is quoted by the Plymouth Herald as saying:

“I can now confirm the ‘cease and desist’ letter sent to the Copthorne Village Association was sent in error in the course of an exercise carried out by Mark Monitor, a brand monitoring/protection agency.

“Mark Monitor will be contacting the administrator of the Copthorne Village Association website to explain this and to apologise for any inconvenience.”

The “sent in error in the course of an exercise” excuse sounds rather unlikely; this is surely yet another example of legal threats being fired off without even looking at the facts of the case, something that happens all-too-often in the world of trademarks. At least the company concerned admitted the error and apologized — something that by contrast happens all-too-rarely.

Last year, we pointed out that Steven Tepp, who worked at the US Copyright Office at the time, and was heavily involved in pushing for ACTA (and downplaying the legitimate concerns of ACTA critics), jumped ship to the private US Chamber of Commerce, which has been one of the stronger supporters of such bad laws. The Chamber of Commerce, which is basically a lobbying organization for some of the world’s biggest businesses, has a history of making up absolutely ridiculous claims about intellectual property, so it’s really not a surprise that it would hire Tepp, who did the same thing from within the government.

However, when Tepp speaks out in support of greater protectionism, especially based on a complete lack of evidence, shouldn’t the press point out that he was heavily involved in the crafting of some of the legislation he’s now supporting from the “outside”? For example, Hillicon Valley has an article about a silly new study from MarkMonitor, which notes the unsurprising fact that, gosh darnit, there are a lot of sites out there that offer infringing products. Big shock. But the article then quotes Tepp saying:

“Online counterfeiting and piracy is a destructive force that threatens consumers, hurts our businesses, and costs American jobs.”

That’s a sort of go to line that we hear all the time. Funny thing is, no one supports it with any actual evidence. It’s purely faith-based. What’s the neat trick that Tepp pulls is he says this in commenting on a report that sounds like it’s presenting evidence to back up his claims. It is not. The report says that there are lots of sites out there offering pirated or counterfeit content. That’s different than proving that those sites are “destructive” or harm consumers or businesses. In fact, over and over again, when you have independent research that looks at those actual questions, you discover that the actual impact of such activities is significantly less than industry lobbyists would have you believe.

So rather than just letting someone like Tepp, who is inherently biased, comment on a report that does not make the claims he says it makes, why not speak to folks who might question some of the claims from the report… or at least note that Tepp is hardly an impartial observer here, but someone who is paid to pretend that the impact of copyright and trademark infringement is significantly worse than any of the evidence actually suggests?

As for the actual report that Tepp was commenting on, it doesn’t actually say what Tepp says it says. You can read the details of the report (pdf) here. It’s almost laughably weak in its methodology. Nowhere does it support any of Tepp’s claims — and you would think that a journalist wouldn’t quote a biased commenter making claims that have nothing to do with the report in question. Specifically, the MarkMonitor report simply looked at some sites that are used for infringement, then assumed that they were used entirely for infringing purposes, and then used Alexa ratings (perhaps the least credible measuring system out there) and simply added up all visits, and seemed to suggest that this was all for infringement. When it came to pharmaceuticals, the researchers did not appear to make much of an attempt to determine which offerings were really gray market importers of generic drugs, as opposed to counterfeits. Instead, it just made some assumptions based on the sites themselves.

So basically, all the report actually shows is that, according to Alexa (again, not considered to be even remotely accurate), some sites that may have some infringing downloads or may sell some unauthorized products get a lot of traffic. Like that’s a surprise. And yet, that leads to a quote from a biased ex-government official, now paid to hype up the “threat” of infringement, as if this study proves we need the new laws he was a part of writing? How is that responsible journalism?