Stories about: "patagonia"
Expand All Posts Collapse All Posts

AB InBev And Patagonia Trademark Dispute Will Proceed To Trial

A little over a year ago, we discussed a lawsuit brought by Patagonia, famed West Coast clothier for all things outdoor lifestyle, against AB/InBev, famed macro-brewer. At issue was AB/InBev’s decision to sell a Patagonia-branded beer line at pop up stores at ski resorts, the exact place where Patagonia clothing is quite popular. Within those stores, AB/InBev also sold Patagonia-branded clothing. Coupled with the beer maker’s decision to do absolutely nothing with its “Patagonia” trademark for six years, you can see why Patagonia sought to invalidate AB/InBev’s trademark. It’s also understandable that the court ruled against AB/InBev’s attempt to have the suit tossed last summer, with the absurd claim that the Patagonia brand for clothing isn’t actually well-known at all. In the meantime, Patagonia asserted in filings that AB/InBev actually defrauded the USPTO when it got its trademark in the first place.

Which brings us to the present, where the beer maker attempted to get at least some of the claims against it dismissed, arguing that the claims about defrauding the USPTO were simple clerical errors and that Patagonia had failed to protect its mark for too long. The court ruled in favor of Patagonia, meaning this will now go to trial. We’ll start with the claims of Patagonia failing to protect its mark, which center around AB/InBev’s registration for trademark indicating the company had been using “Patagonia” continually for five years.

Argentinian brewer Warsteiner Importers Agency Inc. first filed the intent-to-use application for a Patagonia beer trademark in 2006, based on its intent to sell its beer in the U.S., the court said. It filed several extension requests, including one in 2011 that said it still intended to use the mark, but didn’t intend to import its beer. Anheuser-Busch asked it to file one more extension and then bought the application in March 2012. It filed a statement of use, claiming it began using the trademark in July 2012 and received the trademark registration later that year.

Patagonia learned of the trademark in 2013 but believed that Anheuser-Busch had legitimate rights, according to the opinion. But shortly after the beermaker launched Patagonia beer at a pop-up stores at ski resorts in 2019, with the beer and promotional apparel featuring a mountain logo that allegedly infringed Patagonia’s trademarks, Patagonia sued.

In other words, the company picked up on a long-delayed application by another beer maker, bought the application rights to the trademark, and then claimed it had been using the mark for five years, which it had not. When Patagonia learned of the application, it thought AB/InBev’s application was legit, but learned after the pop-up stores began selling clothing that it was not. Patagonia, to add to all of this, sells some beer under its mark as well. Trademark law includes “anti-trafficking” rules that prevent companies from buying applications like this prior to the mark in question actually being used in commerce. The rules for this are complicated, but the claims Patagonia is making as to how AB/InBev tried to get around these rules most certainly are not.

Patagoina also argued that the beermaker fraudulently had Warsteiner change the date on the document assigning the trademark to suggest compliance with the anti-trafficking rule. Anheuser Busch said the change was to correct an error.

The court rejected Anheuser-Busch’s bid for a judgment that its Patagonia trademark had become incontestable, finding it hadn’t been used continuously for five years as required. Incontestable marks can only be challenged if they became generic, abandoned for nonuse, or acquired by fraud.

Anheuser- Busch also still faces allegations of fraud through its alleged violation of the anti-trafficking rule and false claims of continuous use.

In addition to all of the above, the court also decided that the branding AB/InBev decided to use was similar enough that a jury should decide if there was true trademark infringement here.

What should perhaps be most striking in all of this is just how callous AB/InBev appears to be when it comes to the trademark rights of others, especially compared with how protective and expansionist the company is of its own trademarks. It is quite silly to expect virtue and consistency from a multi-national corporation, of course, but the hypocrisy is still quite glaring.

from the nice try dept

Earlier this year, we discussed a trademark suit brought against Anheuser-Busch InBev by Patagonia, the famed outer-wear maker known best for its association with skiing and outdoor sports apparel. While we usually make a big deal about market separation when it comes to trademark enforcement, this case was notable for two reasons. First, the trade dress choices made by AB InBev for its “Patagonia” beer were quite similar to Patagonia’s trademarks, not to mention that AB hosted popup locations at skiing and biking locations to sell its beer, exactly where Patagonia is so well known. Second, AB is a notorious trademark hound, gobbling up all kinds of marks and then wielding them like a cudgel against small entities. If anyone were going to be sensitive to the trademark rights of others, you would think it would be a company like AB. But not so much.

Rather than admitting its error and siding for strong trademark rights, however, AB InBev decided to try to get the lawsuit tossed by claiming that “Patagonia” is not actually well known and therefore should not be afforded federal trademark rights. The court took 20 pages to decide that AB InBev was wrong and that the case would move forward.

U.S. District Judge Virginia A. Phillips disagreed, writing in a 20-page order Tuesday that Patagonia has – at this stage in the proceedings – sufficiently shown its mark is both “famous and distinctive” and that promotion of its brand has factored in its $10 billion in sales since 1985.

“Assuming these allegations are true and construing the facts in the light most favorable to plaintiffs, plaintiffs have sufficiently alleged that its Patagonia mark is “famous” for purposes of its federal trademark dilution,” Philips wrote.

The sales numbers are really all that was required to refute AB’s ridiculous claim. Anecdotally, I can say that I haven’t been to a ski mountain in a decade or so, and even I am fully aware of Patagonia’s brand. The company has been around forever and is a common sight out west.

The court also refused to dismiss on AB’s claims that it in fact had not abandoned its Patagonia trademark by not using it for half a decade and that there would be no confusion by the public that its “Patagonia”-branded beer would be confused with the clothing company.

Phillips also denied Anheuser-Busch’s request to dismiss on grounds that Patagonia failed to show that customers would associate their beer with its clothing and its brand of environmentalism. The brewer likewise failed in its argument that it had not abandoned the Cerveza Patagonia mark from Warsteiner despite not using the mark for five years.

Rob Tadlock, a member of Patagonia’s legal team, applauded Phillips’ ruling as “a well-reasoned opinion rejecting Anheuser-Busch’s effort to avoid defending Patagonia’s claims, including that Anheuser-Busch committed fraud on the Trademark Office and has deliberately tried to confuse customers into thinking that Patagonia Cerveza is produced by Patagonia, rather than Anheuser-Busch.”

Again, where is AB’s strong stance on trademark in this case in which it is the one that appears to have run afoul of another’s trademark rights? To the shock of this writer, it appears the company has something of a “trademark for me, but not for thee” philosophy.

from the cheers! dept

Even if you haven’t read through our previous stories about giant beer brewer AB/InBev being very much into protecting its intellectual property to the extreme, you probably would have guessed that to be the case as a matter of instinct. With a large legal war chest and an equally large legal team, the company has had no problem with gobbling up questionable trademarks and then wielding them as a weapon against even the smallest of non-competitors. With such a strict view on its own IP rights and such an expansive view on trademark law, you would think that InBev would be super into making sure it’s own actions fell well within the bounds of trademark law.

You’d be wrong. Patagonia, the rather well known clothier, has sued InBev over how it’s used a trademark it received in 2012 for “Patagonia”. While you’re sure to be wondering how there could be customer confusion, as the apparel and beer markets are quite different, the details in this case definitely matter. We can start with what InBev did in the early days of holding the trademark, which mounts to essentially: not a thing.

AB InBev was granted a trademark to sell Patagonia beer in the United States in 2012, but the company sat on the name until 2018, when it started selling beer with the branding. Patagonia says their brand was created in the 1960’s and is registered in 90 countries.

So, one party has been using its trademark for decades while the other spent half a decade sitting on theirs. The rest of the details matter as well. For starters, Patagonia released its own brew, called Long Root, in 2016. InBev has also finally started using the Patagonia branding in part to tout a reputation for environmental work that InBev is now getting into. Patagonia, the company, has long been heavily involved in environmental initiatives as well. On top of that, InBev suddenly began setting up pop-up stores on ski hills and in ski villages, which is a prime marketplace for Patagonia. As part of those stores, InBev began selling Patagonia apparel, its rival company’s market for its own trademark. And, keeping all of those details in mind, there is the logo InBev chose to use. 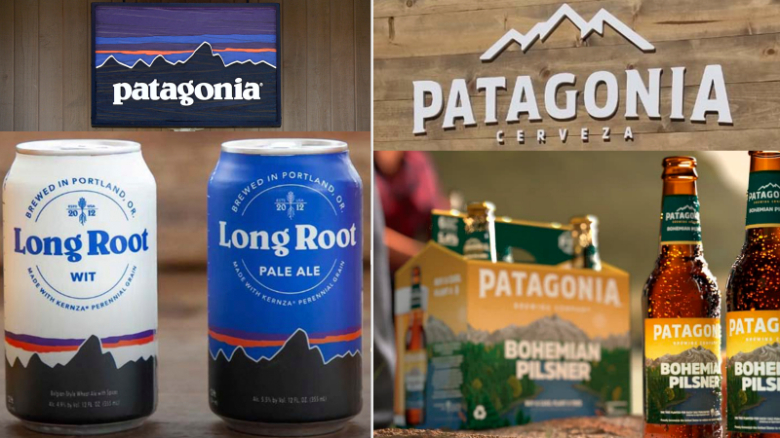 Now, are those logos super-duper similar? Absolutely not. On the other hand, given all of the details and shady actions mentioned above by InBev, it’s not outlandish for Patagonia to suggest that the logos are close enough to be confusing when all other factors are taken into account.

Once again, as seems to always be the case, we find a huge proponent of intellectual property, one that has been happy to use lawyers to bully others, is likely committing trademark infringement itself. It’s enough to make one wonder if there are any true champions of IP among large companies, or only cynics willing to use it when it suits themselves.