Stories about: "polaroid"
Expand All Posts Collapse All Posts

from the please? dept

Three years ago, we called out the stupid trend of big tech companies pretending that they’d hired some pop star as “creative director” after Intel had named Will.i.am to that role and Polaroid had done the same with Lady Gaga. A year later, we repeated what a dumb idea this was when Blackberry named noted iPhone user Alicia Keys to the same role. As we said, if this was, say, an actual music service, and the person was really involved, it might make sense. But the truth of all three of these situations was that they were little more than a promotional sponsorship deal pretending to be a “hire.” And, this really discounts the hard work that actual creative directors do for these companies.

Either way, it should come as little surprise that Blackberry — a company on the verge of not existing — is now admitting that Keys is “leaving her role” exactly a year after it started. Let’s be frank here: she’s not “leaving her role.” She had a one year endorsement/promotional contract, and that deal is now ending. The idea that she was actually employed as a creative director is clearly bogus. What did she do?

She appeared at numerous corporate events throughout the year and in some promotional material.

For whatever reason, tech companies always seem to announce these things in January (often in conjunction with CES, which is taking place next week). Hopefully, this year, we can avoid such silliness. I don’t want to hear about Justin Bieber becoming “creative director” at IBM or Miley Cyrus’ new “job” as “creative director” at Microsoft.

from the is intel the new polaroid dept

Last year, at Midem, one of the keynote interviews was with Jeffrey Hayzlett, who at the time was the Chief Marketing Officer for Kodak. Towards the end of the talk, someone in the audience asked Hayzlett if he could explain the thinking behind the hiring of Lady Gaga to be “creative director.” Hayzlett smiled and responded along the lines of “Well, actually, that wasn’t Kodak, but our competitor, and just the fact that you’re confused about that is pretty much all I have to say about the wisdom of that decision.” Of course, it was Polaroid who had made that “hire.” At CES a few weeks back, one year after this announced “hiring,” Lady Gaga debuted the results of her “job” at Polaroid to mostly unimpressed reviews.

Meanwhile, over at the Intel booth, I saw Will.i.am (and an entourage of folks) walking around and checking out the displays. Knowing that folks like Lady Gaga and Will.i.am don’t just show up at CES for fun, I just assumed that he had some sort of endorsement deal with Intel. Now, comes the news that he’s signed a similar “director of creative innovation” deal with Intel.

Now, to be clear, various reports claim that Lady Gaga was and has been actually involved in product design efforts. And, as an endorsement deal, there’s something quite nice about that aspect to it. After all, lots of celebrities sign endorsement deals for products they don’t even use or care about, let alone have at least some say in designing. But, does having a celebrity, who doesn’t actually have any experience or knowledge about the specific business you’re in, as a “creative director” really make sense? The Polaroid products announced by Lady Gaga at CES seemed sort of pointless — sunglasses that take photos, a paperback book sized “portable printer” for photos (I’ve had a smaller portable printer in my bag for years, and only recently stopped carrying it around when I realized I never use it any more).

On top of that, the idea that these celebrities have “jobs” as “creative directors” is just silly. They’re not creative directors at all, and it’s actually something of an insult to people who actually do have jobs as creative directors. They’re celebrity endorsers who are also advising on product ideas — at best. I like the idea of celebrities actually being more involved with the products they endorse, but pretending they have a real “job” at these companies really just insults the intelligence of people.

Oh, and, did anyone notice that, in the photo of Will.i.am showing off his “Intel badge,” it looks like he’s wearing the “Polaroid sunglasses” that Gaga revealed at CES? Maybe they have some sort of “mutual celebrity fake creative director appreciation society” thing going on between them. 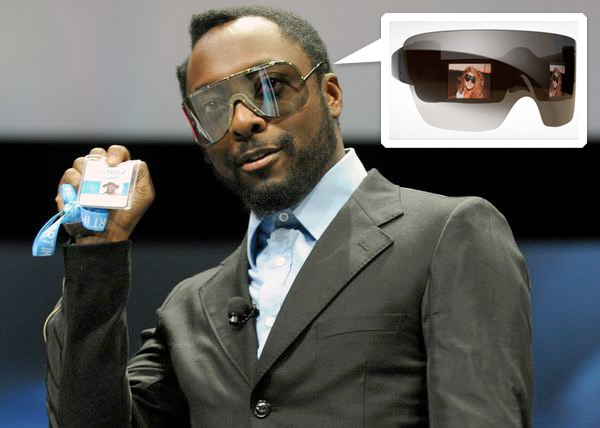 “But do HIS glasses take pics and have screens built in…?” — caption and photoshop thanks to Notcot