Winning the never-coveted “Stupid Patent of the Month” award is no honor. In fact, it sometimes enrages recipients to the point of sueball-throwing. But there is definitely a large amount of schadenfreude to be enjoyed by onlookers — perhaps no more so than in the case of 2015 “SPotM” winner, conspiratorially-monikered Rothschild Connected Devices Innovations, LLC (whose limited liability fails to save it).

Rothschild “invented” a method of hooking up a mixing device to the internet to allow consumers to produce custom blends of their own. Prior art should have invalidated it, but didn’t. Instead, the stupid patent allowed Rothschild to go after anyone who allowed users to customize anything over the internet. In one case, Rothschild applied its super-vague patent to a remotely accessible thermostat, arguing this was patent infringement because it allowed users to remotely customize temperatures. To cap off its troll pedigree, Rothschild filed all of its infringement lawsuits in the Eastern Texas District.

Now it’s being told by the Federal Circuit Court of Appeals it must shell out some money for its disingenuous claims and litigation. (h/t The Technologist) As the opinion details, Rothschild tried to dismiss the lawsuit once it became apparent it wasn’t going to win. The defendant served Rothschild with notice the patent would likely be found invalid after examination, as its first patent claim was ineligible for protection under federal law. ADS (the defendant) offered to settle for $43,000 in legal fees. Rothschild refused.

ADS then filed a motion to dismiss, using the same information it had given to Rothschild. It also included prior art that further bolstered its claims about the patent’s lack of validity. Rothschild quickly moved to dismiss the case, hoping to avoid both a settlement or being stuck with paying the defendant’s legal fees. This attempt failed.

ADS opposed and filed a cross-motion for attorney fees pursuant to § 285,4 see J.A. 249, based on its view that Rothschild’s suit was objectively unreasonable because Rothschild knew or should have known that claim 1 covers patent-ineligible subject matter under § 101 and is anticipated by prior art under § 102(a)(1), see J.A. 261–64. ADS also argued that Rothschild did not intend to test the merits of its claim and instead filed this and over fifty other lawsuits in the District Court to “‘exploit[] the high cost to defend complex litigation to extract nuisance value settlements’” from various defendants.

The district court, however, granted the motion to dismiss and stated Rothschild’s abuse of its likely-invalid patent was evidence of nothing. The Appeals Court reverses this decision, pointing out the lower court ignored evidence and statements presented to it by ADS almost as much as Rothschild did.

The District Court clearly erred by failing to consider Rothschild’s willful ignorance of the prior art. In its Safe Harbor Notice and Cross-Motion for attorney fees, ADS included prior art that purportedly anticipates claim 1 of the ’090 patent. In response to ADS’s Cross-Motion for attorney fees, Rothschild submitted two affidavits relevant here. In the first, Rothschild’s counsel stated that he had “not conducted an analysis of any of the prior art asserted in [the] Cross[-]Motion to form a belief as to whether that prior art would invalidate” the ’090 patent. In the second, Rothschild’s founder echoed these statements. However, in the same affidavits, Rothschild’s counsel and founder both assert that they possessed a “good faith” belief that the ’090 patent “is valid.” It is unclear how Rothschild’s counsel and founder could reasonably believe that claim 1 is valid if neither analyzed the purportedly invalidating prior art provided by ADS. More problematic here, the District Court did not address these incongruent statements in its analysis.

As for Rothschild’s long history of East Texas trolling, the Appeals Court has this to say:

According to ADS, Rothschild has asserted claim 1 of the ’090 patent in fifty-eight cases against technologies ranging from video cameras to coffeemakers to heat pumps. Appellant’s Br. 9. Further, ADS contends that Rothschild has settled the vast majority, if not all, of these cases for significantly below the average cost of defending an infringement lawsuit.

The District Court rejected ADS’s contention, finding “the fact that a patentee has asserted a patent against a wide variety of defendants and settled many of those cases . . . does not alone show bad faith.” The District Court based this aspect of its analysis on a clearly erroneous assessment of the evidence. The District Court predicated its finding on “the absence of any showing that [Rothschild] acted unreasonably or in bad faith in the context of this suit.” However, as explained above, that ancillary finding improperly rests upon statements from Rothschild’s counsel and founder that have no evidentiary value. Therefore, in the absence of evidence demonstrating that Rothschild engaged in reasonable conduct before the District Court, the undisputed evidence regarding Rothschild’s vexatious litigation warrants an affirmative exceptional case finding here.

This being an “exception case,” ADS is entitled to legal fees. The $43,000 Rothschild tried to duck by dismissing the suit is awarded to the defendant on reversal.

This will hopefully be the beginning of the end for this patent troll. A Supreme Court decision shutting down forum shopping — primarily by making the Eastern District of Texas far more difficult to exploit — should drive another nail into Rothschild’s coffin. I’m sure it never had any intention of paying anything out to anyone, as is the nature of all IP trolling operations. Once the judgments start going the other way, it’s difficult to continue to capitalize on this super-shady “business model.”

From Internet Connected Drink Mixer To Any Remote Configuration On The Internet: August's Stupid Patent Of The Month

Imagine if the inventor of the Segway claimed to own “any thing that moves in response to human commands.” Or if the inventor of the telegraph applied for a patent covering any use of electric current for communication. Absurdly overbroad claims like these would not be allowed, right? Unfortunately, the Patent Office does not do a good job of policing overly broad claims. August’s Stupid Patent of the Month, U.S. Patent No. 8,788,090, is a stark example of how these claims promote patent trolling.

A patent troll called Rothschild Connected Devices Innovations, LLC (“RCDI”) owns a family of patents on a system of customizing products. Each of these patents stems from the same 2006 application. The idea is simple: connect some kind of product mixer to the Internet and allow users to make custom orders. The application suggests using the system to make beverages or shampoo.

Here’s how the application describes the invention:

The system and method of the present disclosure enables a user, e.g., a consumer, to customize products containing solids and fluids by allowing a server communicating over the global computer network, e.g., the Internet, to provide product preferences of a user to a product or a mixing device, e.g., a product or beverage dispenser.

Even in 2006, this was a spectacularly mundane idea. The application did not disclose any new networking technology. Nor did it reveal any new beverage-making technology. It just connects a product mixer to the Internet. Any claim to such a humdrum combination should be found invalid as obvious.

All of the patents in this family are pretty silly. But it gets worse. RCDI’s most recently granted patent, U.S. Patent No. 8,788,090, includes an extremely broad claim. Claim 1 purports to cover any system where a “remote server” “transmits” a “product preference” to a product via a “communication module.” This is madness. RCDI is effectively claiming to have invented the idea of remote configuration … in 2006. Even if other claims in this patent family are valid (something we doubt), the Patent Office should never have allowed this claim. 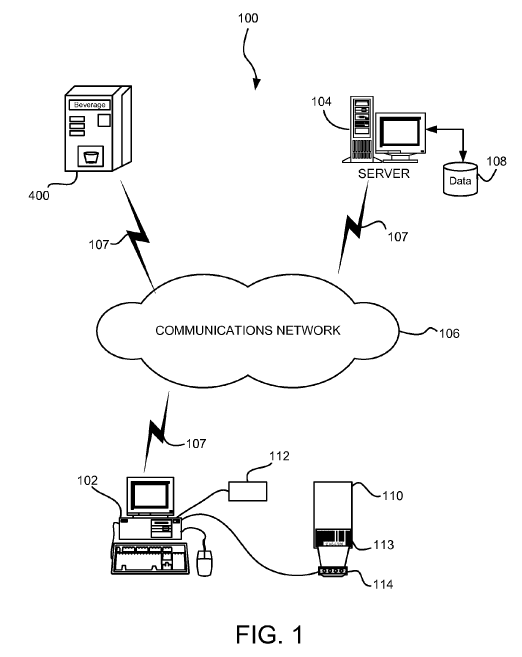 Taking an extremely broad view of this patent claim, RCDI has sued a collection of companies, including ADT, Cisco, Protect America, OnStar, and Rain Bird. It seems that any company that sells products that connect to the Internet is at risk. For example, in its complaint against ADT, RCDI states that a system that allows customers to “remotely customize the operation” of a “thermostat” infringes its patent. Having supposedly invented an online beverage mixer, RCDI is now asserting its patent against the entire Internet of Things.

Even though it traces priority back to a 2006 parent application, this month’s stupid patent is not the product of some earlier, less diligent, era at the Patent Office. The “continuation” application that led to this patent was filed in March 2013 and the patent issued in July 2014. This illustrates how applicants use the continuation process (which allows them to file an unlimited number of new applications based on a previous patent application) to try to get ever broader claims issued. Too often, once the Patent Office issues one patent in a family, examiners are overly lenient allowing continuation applications. This month’s winner likely would have never issued if the examiner had diligently applied KSR v. Teleflex‘s prohibition on obvious combinations.

There will be no prize for guessing where RCDI has filed all of its litigation: the Eastern District of Texas. We recently explained that the Eastern District is the venue of choice for trolls. Its unique, plaintiff-friendly rules make it easier for trolls to use the cost of defense to extort settlements, even when the underlying case is weak.

We need broad patent reform to stop abusive patent litigation. We need ligation reform (including venue reform) that makes patent trolling less attractive. We also need reform at the Patent Office so that it doesn’t issue terrible patents like this in the first place. Contact your representative and tell them to pass patent reform.