Stories about: "umpg"
Expand All Posts Collapse All Posts

Yet another in our ongoing series of stories concerning YouTube’s broken ContentID system. While the company has still mostly remained mute over its recent policy change, which resulted in a ton of bogus ContentID claims, an even worse problem is that ContentID does serious harm to fair use and public domain videos. The latest example of this comes from Adam Manley, who recently posted a nice video about the month of December and how awesome it is. The second half of the video has him singing the famous song “Silent Night.”

“Silent Night” was composed in 1818. It is, without question, in the public domain. There is no question about this at all. Adam’s rendition of the song is him singing it alone (so not using anyone else’s recording). There is simply no question at all that what he did does not violate anyone’s copyright. At all.

So, what happened? YouTube’s ContentID told him that he received not one, not two, but three separate copyright claims on the video, from three of the largest music publishers in the world — basically all of the publishing arms of the major labels. Actually, it’s worse than that. Because when he first published the video, he got a notice that ContentID had found a hit from “one or more music publishing rights societies.” Adam disputed it, pointing out that the work was in the public domain, and YouTube “acknowledged and dropped” the claim. The very next day, however, he got hit again, with completely bogus claims from BMG, Warner Chappell and UMPG Publishing (Universal Music’s publishing arm).

Yes, not only did YouTube’s ContentID hit him with an initial bogus claim, even after he disputed it with the basic logic that the song was written in 1818 and is in the public domain, YouTube came back the next day anyway and hit him with three more bogus copyright claims from three of the biggest music publishers in the world. Basically, the music publishing world, with an assist from YouTube, is making sure that Adam can’t get any of the money he rightfully earned from singing a public domain song — with those publishers stealing it instead. Adam has disputed the claims as well, and while BMG was quick to relent, the other two have not, leaving Adam in a lurch.

Adam’s post is interesting. He points out that he’s used YouTube to make claims against others using his own work, so he sees the value of ContentID, but his mind is changing on the overall value of the program:

As an independent content creator, it is absurd, ridiculous, and downright insulting that I can have my content de-monetized based on a completely fraudulent claim. The fact that the claims are based on an automated system doesn’t make it any better. If anything, it makes me think the automated system should not be in place. Or at the very least, it needs a major overhaul, and a lot more human eyes involved before action is taken.

Now, I’ve been on the other side of this a few times. I didn’t deal with the automated system, but I’ve had to have content taken down for infringing on my copyrights (I generally leave remixed videos alone, but I’ve had to keep an eye out for complete re-uploads of entire videos). So I do understand the point of view of the rights holders who are trying to keep hold of their content. And when I’ve been in that situation, I’ve appreciated the prompt action taken on my behalf against infringing content.

But we’re playing with people’s income, here, and I don’t think an automated system should be in charge of that. Certainly not one that apparently has public domain songs registered to it. Anything fitting that description should only be acted upon once a human eye has reviewed it. Perhaps a different category within the content ID system is needed. A category for protecting specific recordings and arrangements of public domain content, but without YouTube’s entirely too impressive ability to recognize the similarities of someone singing their own version.

This has been a major complaint against ContentID for years, and it’s one of the main reasons why people are so concerned with automated determinations of potential infringement — something the recording and movie industries have been pushing to be mandated by law in various places. This is yet another reason why the idea that it’s “easy” to automatically find and deal with infringement is so technically illiterate. The false positives have very real consequences — sometimes to the point of taking money from independent content creators like Adam, and handing it over to the major labels represented by the RIAA and NMPA.

But it’s also a condemnation of ContentID itself and how YouTube handles it. If you’re dealing with a work that has already been reviewed to be public domain, YouTube should make the system recognize that any future claims should at least be reviewed before being applied.

Here we go again. Less than 24 hours ago, content-protection bots killed a livestream of the Hugo Awards, thanks to the brief appearance of fully approved clips from an episode of Dr. Who. The whole situation was completely absurd to anyone harboring the tiniest vestige of common sense, but IP-protection software isn’t built on common sense: it’s built on algorithms.

This time, content protection via crawling bots have taken down another approved, perfectly legal stream. The victim this time? The Democratic National Convention’s official stream, hosted at YouTube. As Wired reports, if you’re looking to catch up on last night’s activities, including a speech by Michelle Obama, don’t bother:

The video, posted by the official YouTube account for the convention, DemConvention2012, was blocked, according to YouTube, for ostensibly infringing on the copyright of one of many possible suspects:

This video contains content from WMG, SME, Associated Press (AP), UMG, Dow Jones, New York Times Digital, The Harry Fox Agency, Inc. (HFA), Warner Chappell, UMPG Publishing and EMI Music Publishing, one or more of whom have blocked it in your country on copyright grounds.
Sorry about that.

When contacted by Wired for comment, Erica Sackin, an Obama campaign staffer who works on digital outreach, had no knowledge of the outage, asked this reporter for the url and then upon seeing the takedown, said, “I’ll have to call you back.”

The video has since been updated to state that “This video is private.” There’s probably quite a bit going on behind the scenes at the moment, but fortunately Wired snagged the complete list of claimants for future reference. 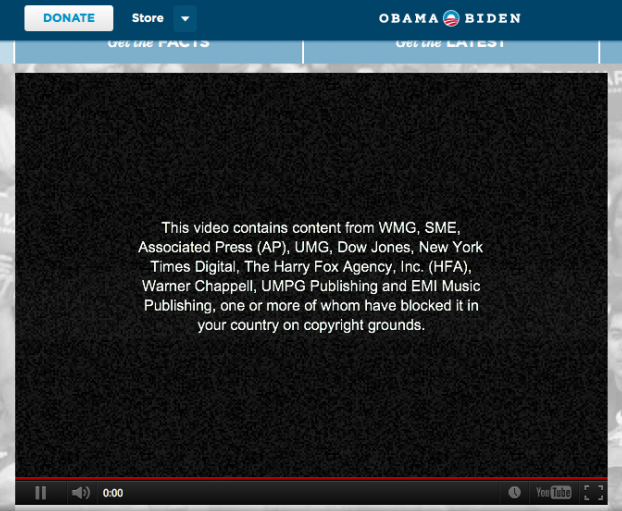 Take a good, long look at that list. There’s a few of the usual suspects in there, including AP, UMG and Warner, entities not known to be shy about claiming content that isn’t theirs.

Now, these entities aren’t directly responsible for this takedown. This is more of an automated match situation, but it still doesn’t change the fact that the inherent stupidity of the action, automated or not, does absolutely nothing to lock down stray, unmonetized content and absolutely everything to highlight the ridiculous nature of copyright protection in a digital age.

If Google can work with copyright holders to produce content matching software, it seems like it might be possible to designate certain accounts or entities as “off limits” from the wandering killbots. If the stream is authorized by, I don’t know, the party of the current President of the United States, maybe, just fucking maybe, everything’s “above board.”

Sure, defining legitimate, pre-approved accounts may prove to be as difficult as determining which content is infringing and which isn’t, but this should be the sort of thing that content holders should be working toward, rather than simply moving from disaster to disaster, smugly secure in the knowledge that filthy file sharers are getting content-blocked thousands of times a day.