Stories about: "wef"
Expand All Posts Collapse All Posts

Internet Society Says 'Oh, Hell No' To ICANN's Plan For A 'UN Security Council For The Internet'

Earlier this month, ICANN, along with the World Economic Forum and a Brazilian government group called CGI.br, announced a NetMundial Initiative, which is being described as a sort of “UN Security Council for the internet.” If NetMundial sounds familiar, that’s because back in April there was a big meeting on internet governance in Brazil called NetMundial. While this has the same name, it seems to be basically unrelated to that, but rather, it appears to be these three groups setting themselves up in power positions over internet governance. While those behind it tossed in a bunch of buzzwords, about how it would be “open source,” a “shared public resource” and would have a “bottom-up, transparent” process, there was a bit of a problem with all of that. You see, the three founding organizations also… installed themselves as permanent members who would control the council. 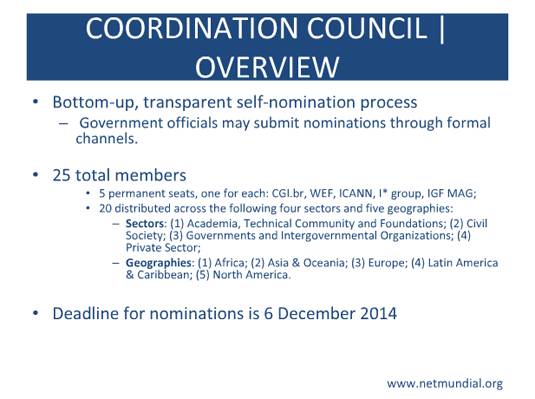 Yes, they want other members, but setting themselves up with permanent seats seems a bit iffy on the whole “bottom-up, transparency” bit. The whole thing didn’t exactly go over well at launch:

“Everything will be done bottom-up, this is the mother of all bottom-up processes,” said Chehade to widespread disbelief in both the chatroom and on Twitter.

The claim that the initiative would not overlap other organizations’ work was also derided. “Why create another platform?” asked one person in the short Q&A session after the presentation. “How do you expect to avoid duplication?”

Asked why ICANN was installing itself as a permanent member of a body that would only focus on non-technical issues when ICANN is specifically a technical body, Chehade gave an answer that left many scratching their heads:

“Why is ICANN on the Council? Precisely to clarify why our role should remain as it is: purely technical. It should not be at ICANN where these issues should be solved.”

So, ICANN is purely technical, and it needs to install itself as a permanent member of a committee that isn’t technical to clarify why its role should be purely technical. Got that?

Anyway, you can see in the slide above, the “I* group” listed as being offered one of the remaining seats. The I* group was supposed to be made up of a bunch of organizations you should already be familiar with: the Internet Society, IETF, IAB, W3C, Regional Internet Registries, ICANN and regional TLD organizations (yes, it appears that the I* group also includes ICANN, despite its separate seat on this council). Either way, the folks at the Internet Society, who have been heavily involved in a variety of internet governance efforts, often in conjunction with ICANN, have slammed on the brakes after seeing this new initiative, saying that the group cannot support a plan that seems so questionably designed:

With respect to the need for new groups, such as the NETmundial Initiative and its Coordination Council, the Internet Society Board reiterates that the Internet Society?s longstanding position is that there is no single, global platform that can serve to coordinate, organize or govern all the Internet issues that may arise. At its heart, the Internet is a decentralized, loosely coupled, distributed system that allows policies to be defined by those who require them for their operations and that ensures that issues can be resolved at a level closest to their origin. The ecosystem draws its strength from the involvement of a broad range of actors working through open, transparent, and collaborative processes to innovate and build the network of networks that is the cornerstone of the global economy.

ISOC further notes that a much bigger priority is getting through the transition of the IANA functions, from being under NTIA/Dept. of Commerce to being separate, thus taking ICANN out from under the thumb of the US government. As we’ve noted in the past, we support this move as being necessary for a variety of reasons, including some that will help prevent dangerous changes to internet governance. However, if this is the kind of crap that ICANN is going to pull, it’s only going to raise even more skepticism about the organization’s position in managing key parts of the internet.

Kudos to the Internet Society for not just giving in. Yes, if you look over the presentation below, there may be plenty of good ideas embedded in the NetMundial project, but if it’s going to go forward, it simply cannot include founding members electing themselves to a permanent controlling position (and also giving those organizations tremendous power in selecting the other council members). This is not how the internet should be run.