Stories filed under: "aacs"
Expand All Posts Collapse All Posts

The other day it occurred to me to have a look at the Pirate Bay’s ‘Physibles’ category for 3D printer plans, to see what’s been added since it launched with a 3D pirate ship model earlier this year. Among the odds and ends (both useful and just-for-fun) like a whistle, a stylus for touch-screens and a Guy Fawkes mask, there is one particularly amusing item: a 3D-printable portrait of MPAA CEO Chris Dodd: 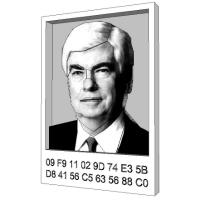 Print it, and behold the visage of yesteryear.

As many will recall, the AACS encryption key (used in decrypting HD DVDs and Blu-ray discs) was at the center of a controversy in 2007, when aggressive MPAA takedowns of the hexadecimal series sparked a massive Streisand Effect that plastered the key all over popular websites like Digg. While this was hardly the only time that Dodd and the MPAA have clashed with the Pirate Bay community, it has since been commonly used as a symbol of the unstoppable nature of information online.

So if you have a 3D printer and would like a constant reminder of “the visage of yesteryear”, go ahead and extrude yourself one today. And if you’re a former Senator who took over a major lobbying organization despite your promise not to become a lobbyist, go ahead and continue waging war with the internet community—they’ll just keep finding creative ways to rub it in your face (or a 3D replica thereof).

AACS Is Like Every Other DRM: All It Does Is Annoy Customers

The cornerstone of the AACS copy-protection technology used on next-generation DVDs is the ability to revoke keys on playback devices. This means that when AACS keys get cracked (as happened months ago), DVD makers start pressing discs with a new key — and discs with that key not only won’t work in playback devices until they’re updated to recognize it, it renders those device unable to play back any Blu-ray or HD DVD discs at all. Sure, the system “works”, but at the expense of potentially pissing off customers who have legitimately bought their DVDs. For the movie industry, though, that’s a price they’ve long been willing to pay; the AACS scheme just further illustrates that DRM doesn’t stop piracy, all it does is frustrate users.