Stories filed under: "arson"
Expand All Posts Collapse All Posts

Reverse warrants have been deployed again. And, again, Wisconsin law enforcement agencies are involved. The feds used a reverse warrant to track down robbers who hit a bank at a strip mall just outside of Milwaukee earlier this year.

The feds are at it again. This time it’s the ATF and the targets are two people suspected of arson.

The “reverse” warrant affidavit [PDF] spends a great deal of time letting us know what Special Agent Thomas Greenwich knows: that phones generate a ton of location info using a variety of connections (WiFi, Bluetooth, cell towers) and this information tends to get hoovered up almost immediately by service providers. In this instance the target is Google and the ATF wants any records that fall within two geofenced areas surrounding the sites of two suspicious fires.

If there’s any upside here, it’s that the geofenced locations won’t be sweeping in as many non-suspects as other reverse warrants we’ve seen. And it includes photos depicting the areas targeted by the non-targeted warrant, which helps judges (and interested citizens) see how much potential data the ATF is targeting.

There were two suspected arsons in Milwaukee, located less than 5 miles apart, occurring within three weeks of each other. Both started at the back of the houses and both used accelerants. And both houses had a common denominator: John P. Hunt. Hunt had been evicted from one address (4047 N. 7th) two weeks prior to the first fire, and had been trying to claim tools left behind by a deceased family member, which were stored at the second address (5915 N. 42nd St.). This included one unscheduled visit to reclaim the disputed possessions which had been sorted out by local law enforcement four days before the second suspicious fire.

Here are the geofence coordinates included with the affidavit: 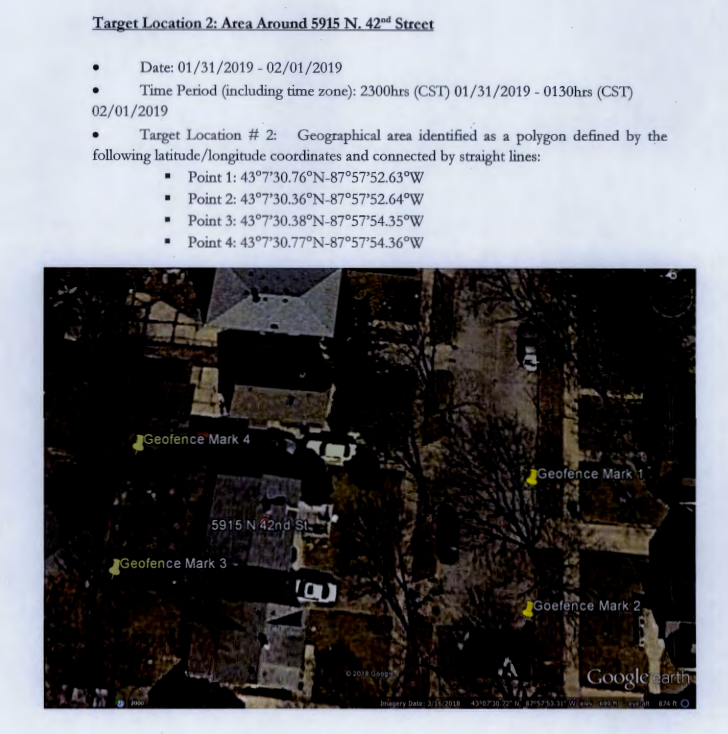 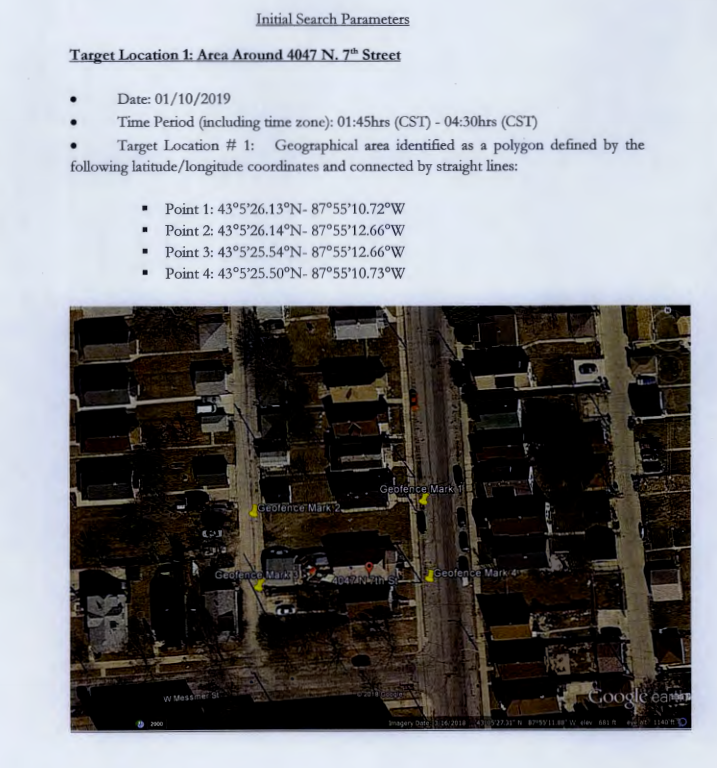 The geofences here are about as limited as they can be, given the nature of the crime. These are much more constrained than others we’ve seen — ones that cover entire blocks in heavily-trafficked areas.

That being said, there are still a few problems. First, coarse location data isn’t precise enough to exclude people living in surrounding houses. The geofenced areas will also capture foot and road traffic that passed through the area during the time frame investigators are looking at.

Finally, there’s the problem that simply does not ever go away, no matter how tightly-constrained the geofence is: these warrants work in reverse, providing law enforcement with location data on people who aren’t suspected of committing criminal acts and allowing investigators to use a pile of non-suspicious data to develop reasonable suspicion.

This data request seems almost extraneous. The ATF already appears to have a couple of suspects — ones well-known to both federal agents and the Milwaukee Police Department. The MPD executed a search warrant at the 4047 N. 7th Street address last summer (following “10-15 visits” to the house by MPD officers during that same summer), recovering “a large amount of narcotics and several firearms.” John Hunt — the person connecting the two torched properties — was charged with several drug and gun-related offenses.

Given this fact, it would seem investigators might want to start with John Hunt and then work their way outward if that doesn’t pan out. Instead, they’re demanding location info on everyone in the area and then hoping to narrow this list of info down to the person (or people) they already suspect. Yes, it’s always useful to have as much evidence in hand as possible before arresting someone, but that law enforcement desire needs to be weighed against the impact it will have on non-suspects just because they happened to connect to cell towers in the wrong place at the wrong time.

Ohio Arsonist Gets Busted By His Own Pacemaker

When we talk about pacemakers here at Techdirt, the focus is usually on how the devices have paper-mache grade security, allowing anybody to assassinate the cardiac-challenged with relative ease. In fact we’ve reached the point where the FTC had to recently issue its first ever warning against a pacemaker vendor when it announced that hackers could comprmise pacemakers made by St. Jude Medical, sending “commands to the implanted device, which could result in rapid battery depletion and/or administration of inappropriate pacing or shocks.”

But your pacemaker may just betray you in other ways, too. In Ohio a man was indicted this week on arson and insurance fraud charges after his Pacemaker data contradicted the story he was telling authorities. When the man’s home burned down on September 19, Middletown resident Ross Compton told authorities he quickly packed some belongings in a suitcase and some bags, broke a window with his cane, and quickly fled through the window before carrying his belongings back to the car. The man also acknowledged at the time that he had a pacemaker.

So police obtained a warrant for the data stored on the device, and doctors quickly concluded that the story the man’s heart was telling didn’t match the narrative coming out of his mouth:

“A cardiologist determined that it was “highly improbable,” due to his medical conditions, that Compton could do all the collecting, packing and removal of items from his house and then carry them in the short period of time he indicated, according to court records. Police have said statements they received from Compton were “inconsistent” with the evidence they gathered. They also have said that he gave statements conflicting with what he had told a dispatcher, the Hamilton-Middletown Journal-News reported.”

Obviously there are numerous privacy questions at play here, since we’re living in an era when your car, home, phone, and implant data can not only be used to support criminal charges, but will increasingly be used by giant corporations to determine everything from your insurance rates to your qualification for health care. As such, the Electronic Freedom Foundation was quick to warn the AP about the slippery slope of having your own body’s data used against you in such a fashion:

“Stephanie Lacambra, a criminal defense staff attorney with the San Francisco-based foundation, said in an email Tuesday that Americans shouldn’t have to make a choice between health and privacy.
“We as a society value our rights to maintain privacy over personal and medical information, and compelling citizens to turn over protected health data to law enforcement erodes those rights,” Lacambra said.”

Internet-of-things devices are not only poorly secured, the privacy policies affixed to most of them are a dumpster fire. So remember folks: the next time you intend to commit a crime or apply for health coverage with a pre-existing condition, remember to wipe the data from all of your cybernetic implants — and get the latest firmware update for your cerebral and coronary firewalls and intrusion detection systems.