'Get Up, Stand Up' For… Whose Rights Now?

from the what exactly are they promoting dept

If you read our recent post on the US’s new IP czar, Danny Marti, and his questionable ideas, you already saw much of this, but that was a (super, crazy) long post, and I just can’t stop thinking about the ridiculousness of the World Intellectual Property Organization (WIPO) using the title of a popular Bob Marley song to promote World Intellectual Property Day, which was held back on April 26th. Here’s the WIPO website about it: 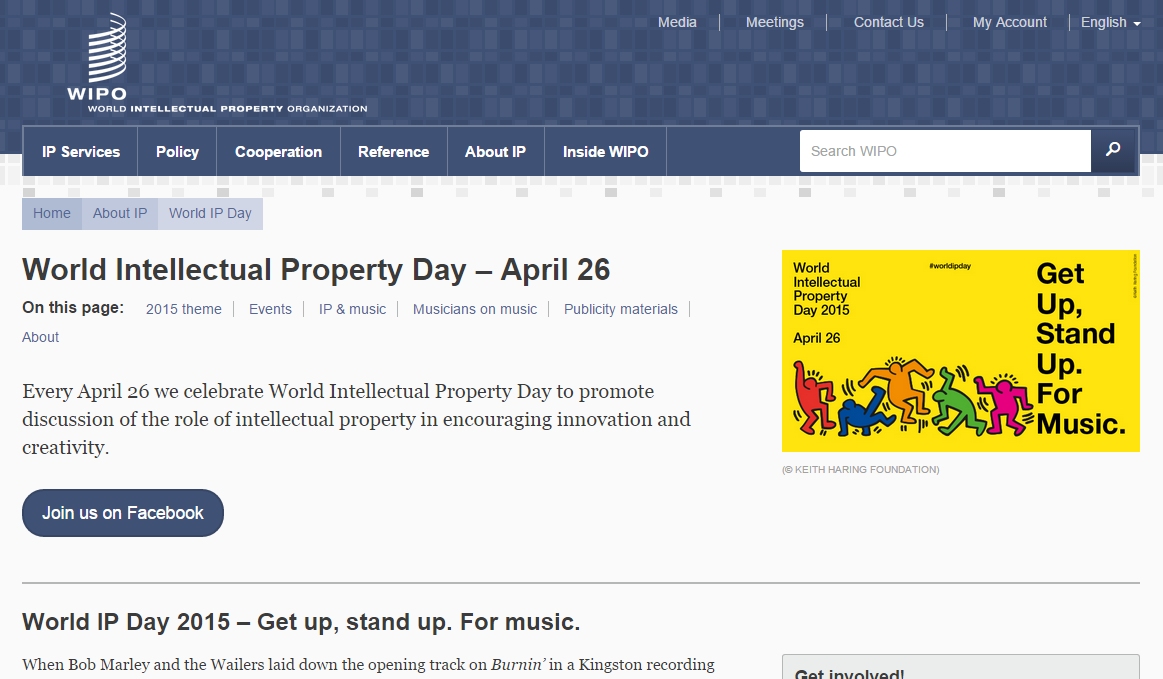 As you can see, the theme was “Get Up, Stand Up. For Music.” This is a play on the title of Bob Marley and the Wailers’ famous song “Get Up, Stand Up.” As you may know, this song was written by Bob Marley after touring Haiti, and was first released on the Wailers’ 1973 album Burnin’. That’s important because a few years ago, Bob Marley’s heirs sought to regain control of his copyrights from Universal Music (which got them when it bought Island Records) by going through the copyright termination process (which allows original artists to regain control over their copyrights years after assigning them to others). We’ve written a bunch about copyright termination in the past, though this case was a bit different — as it was under the old termination rules, rather than those in the 1976 Act (obviously, a recording from 1973 wasn’t recorded under the ’76 Act).

The end result? The court claimed that Marley wrote the song as a work made for hire and thus Universal could keep the copyright, and not give it back to the Marley Estate.

So, if we’re “getting up, standing up, for music,” what message is WIPO really sending here? That we should support giant multinational gatekeeper corporations that play legal games to keep the copyright and control from the actual artists and their heirs? Really?

The decision is even more bizarre and ridiculous if you’re even remotely familiar with things like the history of popular Jamaican music. Hell, even the history of reggae itself that led to Bob Marley becoming so famous. You had records that made their way from America that first influenced Jamaican music in the late 50s and early 60s, and without enough of it flowing into Jamaica, local record store owners started setting up their own recording studios, combining Jamaican and other Caribbean rhythms with American R&B to create entirely new kinds of music, but very much built off of American music: Jamaican shuffle, ska, rocksteady and, eventually, reggae. Some of the earliest songs were merely re-imaginings of American songs but with a Jamaican twist.

Hell, just look at Bob Marley’s own first album, The Wailing Wailers, which was put out by Studio One, the leading and biggest Jamaican studio for popular Jamaican music at the time. It included a cover of the American hit “What’s New Pussycat?” and, more importantly, the song “One Love” (in a very different version than the famous one you probably know — though, frankly, I prefer this original one). However, that version included a pretty clear copy of Curtis Mayfield’s amazing tune “People Get Ready,” which was released the same year — but Mayfield wasn’t credited at all, to make sure there were no copyright issues.

You can find that kind of story repeated throughout the history of popular Jamaican music, and it was this kind of regular copying, building on and remixing of others’ works, that helped make Jamaican music — and Bob Marley, in particular — so popular.

In fact, in an effort to produce more new records more quickly, it was pretty common for producers/sound system operators in Jamaica to get a bunch of studio musicians together to record a bunch of backing tracks, or “riddims” and then let a whole bunch of different singers sing different songs over them. You can find tons of classic old Jamaican songs with identical backing tracks. Here’s Sound Dimension’s “Real Rock” which you can probably find on dozens of reggae songs, such as Dennis Brown’s “Stop that Fussing & Fighting”,
or Willi Williams’ “Armagideon Time” (which was famously covered by the Clash a few years later).

Or, you have Jamaican bands taking American hits and writing entirely different lyrics. Ever hear the Gaylads doing “Stop Making Love”? That song sound familiar? Of course it does, it’s the Four Tops’ “Same Old Song”.

And, of course, nearly all of this happened almost entirely in the absence of any real copyright laws. An explosion of creativity and music, that you can then take and trace a fairly straight line from Jamaican reggae to Jamaican dancehall to American hip hop and onward.

Yet, we have WIPO pointing back to all of this as an example of the need to “get up, stand up” for stronger copyright laws for music? Really?

Now, to be clear, the situation in Jamaica for musicians wasn’t always great. Producers/sound system operators frequently screwed over artists. The underlying aspects of the story in The Harder They Come is only loosely fictionalized. Some musicians were screwed over, and what little bits of copyright law that were actually used, it was generally used to benefit gatekeepers over the artists — which is how Bob Marley’s heirs were left in a situation in which Universal Music fought and won in court to keep those copyrights from going back to the Marley estate.

Given all that, it’s a mystery as to why anyone involved in intellectual property could possibly think that referencing Bob Marley, Jamaican music, or the song “Get Up, Stand Up” would even remotely make sense for “World Intellectual Property Day.” The entire song and the history behind it is more of a condemnation of intellectual property and how it was often used to harm artists. But, of course, the geniuses at WIPO don’t know much about actual culture. They just saw an opportunity to co-opt a popular concept and use it to their own advantage. That’s perfectly fine of course, but it does make me wonder if WIPO gave Marley’s heirs any compensation for using the title of his song? Or, does WIPO not really believe in “standing up” for that sort of thing?

Reuters is reporting on the fact that Bob Marley’s family has lost a case where they attempted to get control over certain rights concerning his most famous songs. I haven’t yet seen the actual ruling (anyone have it?), and the Reuters writeup is a bit confusing at points, but the point that caught my attention was that the judge ruled that Universal Music holds the rights to Marley’s music, because Marley’s work was done on a “work for hire” basis:

Cote concluded that Marley’s recordings were “works made for hire” as defined under U.S. copyright law, entitling UMG to be designated the owner of those recordings, for both the initial 28-year copyright terms and for renewals.

“Each of the agreements provided that the sound recordings were the ‘absolute property’ of Island,” Cote wrote. “Whether Marley would have recorded his music even if he had not entered the recording agreements with Island is beside the point.”

She added that it was irrelevant that Marley might have maintained artistic control over the recording process. What mattered, she said, was that Island had a contractual “right” to accept or reject what he produced.

If you’ve been paying attention to the music legal world lately, you know that the whole question of whether or not sound recording deals were “works made for hire” is a multi-billion dollar question right now. In fact, it’s such a big deal that the RIAA had a Congressional staffer named Mitch Glazier sneak four words into a big Congressional bill in the middle of the night when no one noticed making all sound recordings into works-made-for-hire — thus depriving artists of the right to regain control over their copyrights via the copyright termination process (purely as a coincidence, we’re sure, Glazier was officially hired at over $500k/year by the RIAA a few months later — and he’s kept that job ever since). Thankfully, people noticed this underhanded move, and a campaign from musicians forced Congress to fix Glazier’s trick.

The legal issue here is a bit down in the weeds, but effectively, along with copyright extension, Congress does allow content creators to “reclaim” their copyright — regardless of any legal contract saying otherwise — at certain “termination” points. The big exception? If the work in question was done as a “work-for-hire,” and certain types of works were deemed “work-for-hire” in an extremely arbitrary fashion (basically based on who had political clout in the negotiations). I actually think copyright terminations make very little sense, and it’s a weak “response” to ever-lengthening copyright law. A much better solution would be to vastly shorten copyright’s term, and then not have to deal with termination issues. However, the fact that the recording industry fought it so hard shows how their claims of being looking out for the best interests of musicians is pure hogwash.

However, with musicians gearing up to exercise termination rights, and record labels looking for any possible way to keep those rights for themselves — including any possible way to twist the law to say existing works were, in fact, done as work-for-hire. Of course, the fact that they had Glazier slip changes into the law makes it pretty damn clear that they know, quite clearly, that such works were not really work-for-hire.

While I don’t know if there was a specific contractual anomaly with Marley’s contract, the fact that a judge found those works to be “works-for-hire,” suggests that the same may be true of other recording artists’ contracts, and you can bet that the RIAA lawyers are dancing a happy dance with such a ruling coming out. Some musicians, however (you know, the ones the RIAA pretends to represent), may have just had the rights they thought they were about to get back, ripped out from under them.

You Can't Sue For Trademark Infringement Forty-Five Years Later; Wailers Get To Keep Their Name

If you’re a music fan, and you hear of a band called “The Wailers,” your first thought is most likely to be the band originally formed with Bob Marley, which continued to perform well after Marley’s death. However, there’s apparently another band called “The Wailers” that was formed in Seattle in 1959, pre-dating Bob Marley, Peter Tosh and Bunny Wailer getting together at Studio One in Kingston for Coxsone Dodd in 1963. Obviously, that was a long, long time ago, so it was a bit strange that the Seattle Wailers sued the Jamaican Wailers back in June for trademark violation. Considering the two bands had coexisted in some manner for 45 years, you would think there wouldn’t be much of a problem. In fact, the Seattle Wailers only registered a trademark on the name in 2003. And, while they complained that the Jamaican Wailers owned the wailers.com domain name, that was registered before 2003. Luckily a judge has agreed, and told the Seattle Wailers that they waited way too long to file such a lawsuit, and there’s no evidence that the Jamaican Wailers did anything in bad faith with their name or domain name. This is a good ruling, at least, but even the fact that the Seattle Wailers thought it was worth taking a shot at such a lawsuit shows how the concept of “intellectual property” has been changing recently. It really has reached the point, where people are associating any kind of intellectual property with having total and complete rights over things that shouldn’t be limited that way. In an age where copyright, patent and trademark lawsuits are so commonplace, it’s really no surprise that folks would dredge up a situation that had worked fine for 45 years and try to make a lawsuit out of it.