from the we know all about you, but good luck finding out about us dept

Chris Soghoian, the ACLU’s chief technologist, has decided to troll the DEA. His complaint is valid, though. The problem is, how do you troll the DEA when it’s almost impossible to find the contact info of the person you want to speak to? Just like the FBI has more options at its disposal than simply demanding Apple help it beat down an iPhone’s front door, Soghoian was able to route around the DEA’s unforthcoming attitude.

How to disclose a security flaw to the DEA.
1 Find CISO on LinkedIn.
2 Look up consulting company records.
3 Email.https://t.co/sRK56FSkEL

How to disclose a security flaw to the DEA.
1 Find CISO on LinkedIn.
2 Look up consulting company records.
3 Email.

The email address was harvested from a third-party website for a company DEA CISO Bret Stevens is apparently associated with, Innovative Security Solutions, Inc., conveniently located in northeastern Virginia, right outside of Washington, DC.

This site will allow you to edit company info, provided you can socially engineer your way into a position at the company. That being said, it looks loads better than the company’s original site, which appears to have been last updated five minutes after the domain was registered (2004). 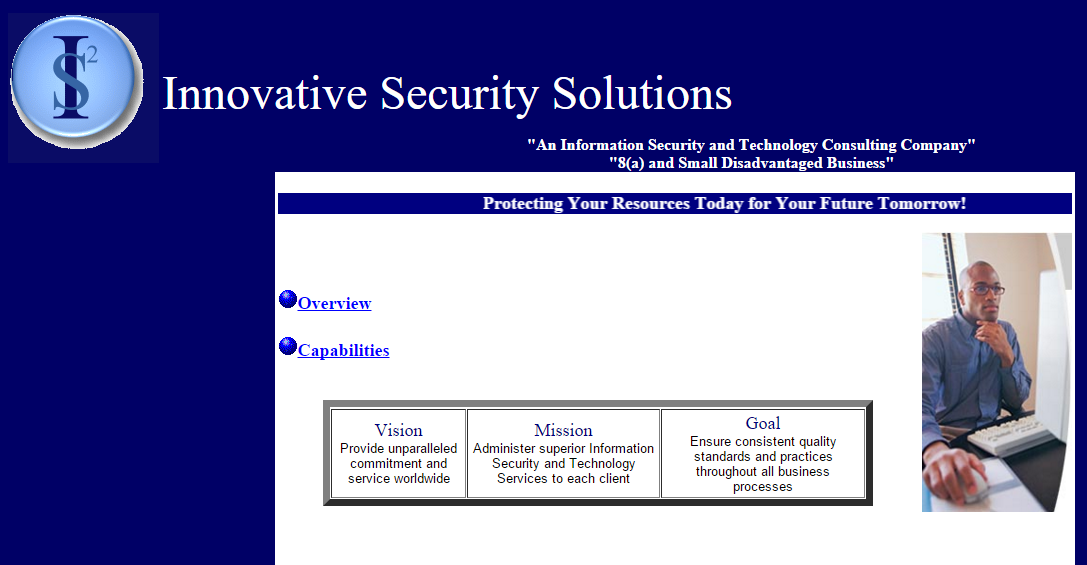 There’s nothing on this site referring to Bret Stevens, current DEA security chief, but then again, the site doesn’t appear to be subject to frequent updates. Or any updates.

Anyway, Soghoian wanted to point out a security flaw on the DEA’s website. The DEA will accept tips from citizens. However, it does absolutely nothing to protect these helpful citizens. From Soghoian’s notification email:

This website does not use HTTPS to protect the transmission of information. It should.

Quite correct. Not only has the Office of Management and Budget stated every agency must use HTTPS on all public-facing websites by the end of 2016, but you’d think a form that collects personal info about members of the public — especially in conjunction with info about possibly armed and violent criminals — would be given an extra layer of security. Apparently, the DEA is not all that concerned about its tips being scooped by criminals, or criminals intercepting unsecured tips in order to target do-gooders.

Soghoian’s email also suggests the agency be a little more transparent about its security staff.

On a more general note, I would also like to encourage you to post publicly contact information for your information security team, so that researchers and other individuals can responsibly disclose flaws such as this issue. This is a best practice followed by some federal agencies, widely adopted by those in the private sector, and promoted as a best practice by the Federal Trade Commission.

If this email manages to reach Bret Stevens, it will likely be sneered/groused at before being discarded as the imperious communications of a meddling motormouth representing an entity far too concerned about the rights of all Americans, especially the guilty, drug-dealing ones. As for its unsecured tip form, it will likely remain unsecured until the DEA is finally forced into compliance with the OMB’s instructions.

Use at your own risk.

A few weeks ago, there was quite a big story concerning how the NSA paid $10 million to RSA to make its compromised random number generator the “default” in a key RSA product. The RSA issued a ridiculously stupid “categorical denial” of the report, which actually denied something entirely different, more or less confirming the original report. Following this, one of the most well-known security researchers around, Mikko Hypponen, announced that he was cancelling his planned talk at RSA’s big conference in February. Since then, additional security experts, including Chris Soghoian, Jeffrey Carr and Josh Thomas have each announced that they’re cancelling their own talks as well.

Carr also has a good post debunking some of the key claims in RSA’s non-denial denial. For example, RSA tried to suggest that Dual EC DRBG was fairly standard when it decided to make it the default, but that wasn’t the case. In fact, as a few others have pointed out as well, the NSA actually used the fact that RSA had made it the default in its BSAFE toolkit to push Dual EC DRBG forward as a key standard via NIST, leaving out the tidbit where they had paid RSA $10 million to sell its soul. Carr further notes that, not too long before that, RSA’s former President and CEO, Jim Bidzos, had clearly stated that RSA needed to recognize that the NSA believed that RSA was the enemy:

“For almost 10 years, I’ve been going toe to toe with these people at Fort Meade. The success of this company (RSA) is the worst thing that can happen to them. To them, we’re the real enemy, we’re the real target.”

While Bidzos was long gone from RSA when this deal was concluded, anyone working at RSA had to know that the NSA’s interests and RSA’s interests were not aligned. The fact that RSA appears to have, at least, looked the other way concerning the security of Dual EC DRBG, while quietly pocketing the money, is really damning. It’s good to see security experts speaking up and taking a stand against the company, not just for the deal, but for its totally bogus fake denial.

Who Should Be On The 'Independent' NSA Surveillance Review Board?

We’ve been pointing out that President Obama’s “Surveillance Review Board” — which is being put together to provide an “outside” review of the NSA’s surveillance efforts — doesn’t inspire much confidence. All are barely “outsiders”, having worked closely with President Obama in the past. There are no technologists on the panel at all. Beyond Peter Swire, it’s not clear that any have that much experience or focus in civil liberties/4th Amendment issues. Oh, and it all “reports” to James Clapper, the Director of National Intelligence who runs these programs, and a confessed liar to Congress about them. It’s the kind of board that you put together when you want to pretend there’s been an outside review.

Given all of that, Gordon Mohr suggested via Twitter that we put together our own “shadow” board, comprised of members who we’d love to see on the board instead of who they currently have. Who would we want reviewing these things if there were to be a real “outside” and “independent” review of the NSA’s surveillance efforts? This is not an easy list to put together, because there are so many folks who would be good. But I’ll suggest a few here and would like to hear from others in the comments. We’ll start with the first five (to match the same number on the official board), followed by some potential alternates.

At least that would be my initial top five list — all of whom have technology experience, some legal experience, and while every one has had some connections to government, they are generally considered “outsiders”, while still clearly having the credibility to be taken seriously by the federal government. There are, of course, plenty of others who I think would be good as well — including folks like Julian Sanchez, Marcy Wheeler, Jim Harper, Jennifer Granick and others who have spent a lot of time digging deep into NSA claims and related privacy issues — but they have less of the technology background necessary. There are plenty of other good names out there, so feel free to suggest some in the comments.

While we keep hearing folks in the entertainment industry and their supporters in DC talk about how great it is that the “six strikes” “Copyright Alert System” (CAS) was a “voluntary” agreement between industry players, one of the worst kept secrets in the world was that the White House was heavily involved. They basically helped Hollywood out and at least hinted strongly at the fact that if no “voluntary” agreement came through, legislation might have to be put in place (creating a novel definition of “voluntary”). Specifically, it came out that Victoria Espinel, the White House’s IP Enforcement Coordinator (IPEC), had been emailing with people about the program.

That news came out because Chris Soghoian had submitted a Freedom of Information Act (FOIA) request, seeking details of all communications between Espinel and her staff and the various players in six strikes, both the entertainment industry and the various ISPs (no need to seek communications with the real stakeholders, the public, since they weren’t even invited to the table). However, Soghoian felt that the Office of Management and Budget (OMB), in which Espinel works, kept key documents from being revealed, and appealed. Following that, OMB released a few more documents, but still kept many secret. Soghoain then went to court over the issue — arguing specifically that exemptions claimed for “trade secrets, commercial or financial interesets” and “privileged intra-agency memoranda and letters” were inappropriate. Unfortunately, the court has now rejected that case, siding with OMB.

At issue are some details of the draft “memorandum of understanding” that created the six strikes CAS program. Apparently, entertainment industry lobbyists shared those drafts with Espinel, but OMB won’t release them, claiming that they’re commercial, confidential information. OMB also argued that the documents were provided voluntarily and that the drafts “were not compelled or obligated.” In response, Soghoian argued that the documents were clearly provided to OMB for the sake of having Espinel “press ISPs for additional steps to combat copyright infringement (steps they are not legally obligated to take).” The court rejects this, saying that the info was provided confidentially, and voluntarily, and it represents commercial information. So… they remain secret.

The court also rejected an attempt to see internal discussions within the government about the six strike plans (as well as discussions on foreign laws like the Hadopi six strikes plan in France). Espinel’s office argued that these are protected because they’re a part of the “deliberative process privilege” that lets them withhold internal deliberative discussions about policy (so that government employees can discuss stuff openly before coming to an official policy position). However, here, Soghoian argued that Espinel and the IPEC have almost no policy setting role under the law, and thus this exemption makes little sense. Once again, the court disagreed. Here, they argued that since the government may make policy decisions based on whether or not six strikes formed (or how well it works) that these communications were properly classified as privileged and not open to FOIA requests.

The court goes into a bit more detail on a few specific withheld documents, but the conclusion is all the same: OMB can keep these documents secret because they involve internal deliberative discussions. This isn’t too surprising, but it also means that we don’t get to learn the full extent of the government’s involvement in this “voluntary” process.