I thought writing about San Diego Comic Con being censorial assholes would be the strangest story we’d write about Comic Con this year, but leave it to airline security to come up with an even more bizarre story. Apparently United Airlines (because of course it would be United) put up a sign at the airport in San Diego telling people that all books needed to be removed from checked bags. A Twitter user named Adi Chappo tweeted a picture of the sign at the airport: 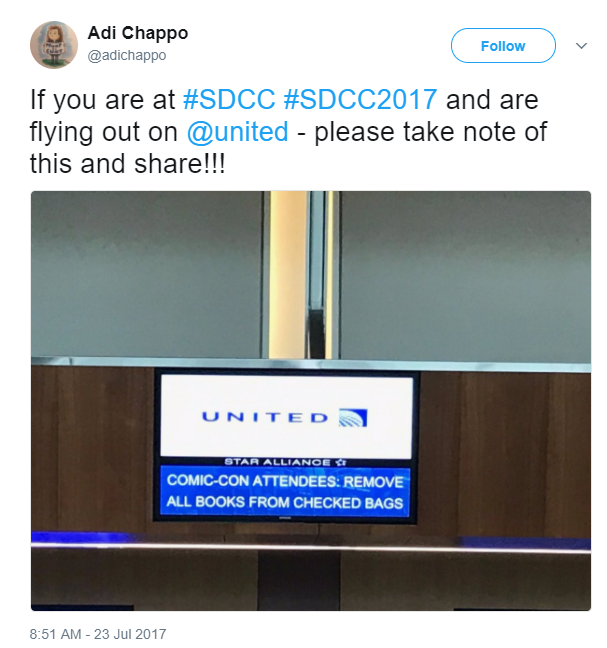 United, being United, responded that the TSA was demanding that all comic books from San Diego Comic Con could only go in carry on luggage.

Chappo asked for more detail and United told him to reach out to the TSA directly.

This wasn’t just a one-off either. Another Twitter user posted a Twitter direct message conversation with United, in which it claimed that there was a TSA restriction on any comic books in checked luggage:

Ahaha holy shit the airport is going to be a clusterfuck. #SDCC cc @SD_Comic_Con pic.twitter.com/WIYqSpzlaA

So that’s all bizarre enough. I mean, there has been talk about restricting electronics on flights, as well as some talk of sifting through reading materials, but comic books? From San Diego Comic Con? Many people were left wondering what the hell the TSA could be thinking… and that included the TSA. When asked about all of this by reporters, the TSA appeared to be just as confused as everyone else and insisted there was no such restriction:

There is “no restriction on anything related to putting comics or any type of books” in baggage, and TSA never put out any guidance to that effect, she said.

“In fact, they are allowed in both checked and carry-on baggage,” the spokeswoman told Consumerist, adding that there were no delays in the processing of checked bags out of San Diego yesterday.

Apple Threatens To Kick Out Comic Book App Over 'Adult' Content, Forcing Publisher To Pull 40% Of Its 4,000 Titles

Once again, Apple has decided to arbitrarily boot more content out of its garden, expressing its concern that things might be getting a little too sexy for its apparent target audience of schoolchildren who have never browsed the internet.

Reports are coming in that the digital comics distributor Izneo has had to radically prune their catalog or face banishment from iTunes.

Izneo has been selling digital comics on the iPad since they released an iPad app in mid-2010, and they successfully built a catalog of over 4000 French and Belgian titles.

Everything was going fine until late Friday night when one of Apple’s censors noticed that Izneo sold adult comics. And since Apple clearly cannot allow their precious iPad to be sullied by salacious content, the censor gave Izneo 30 hours to remove all adult comics.

Like other Apple takedown requests, this one arrived with no warning and no clear indication as to what content Apple felt was inappropriate and should be removed.

IDBoox broke the story earlier today, and they report that Izneo had absolutely no warning that there was a problem or guidance as to which titles needed to be removed. All they were reportedly told by Apple was that the adult content had to go, so Izneo drastically pruned any comic that showed a breast, cleavage, and even ones with characters evoking a suggestive gesture.

In order to comply with this incredibly vague request, Izneo immediately pulled 2,800 of its 4,000 titles. After a more in-depth review of its content, Izneo restored about half of what it had dumped, bringing it back up to 2,500. That’s still 1,500 titles pulled because Apple said, “Jump,” and couldn’t even be bothered to specify how high.

Now, Izneo is stuck in a bit of a bind. It can abide by Apple’s ethereal “guidelines” and hope that it doesn’t need to remove even more titles. Or, it can start looking at a few options to get around the walled garden while still remaining somewhat ensconced. Nate Hoffelder suggests it switch to an HTML-5 reading app, or better yet, simply stop selling titles from within the app. This will allow Izneo to avoid Apple’s app censoring while also bypassing the “opportunity” to toss 30% of the in-app purchase Apple’s way.

As long as Apple is going to continue to behave like a stern parent in need of mood stabilizers, app developers and content creators are going to find themselves on the receiving end of vague missives like these. Apple is, of course, welcome to run its business however it sees fit, but every story like this serves as a warning to developers: if you want to play in Apple’s garden, you’ll have to abide by the nebulous, arbitrary rules. Apple has stated that if game developers want to handle serious issues (like the Syrian War), they should write a book instead. What is it going to tell comic book creators whose artwork veers into adult areas? Fire up the keyboard and turn those pictures into 1,000 words?

from the connect with fans dept

Paul Watson points us to yet another example of how engaging with fans of your work (even if, technically, they infringed on your copyrights) can lead to pretty happy outcomes for everyone. The basic details are that comic book artist Steve Lieber discovered that folks at 4chan had scanned in and uploaded every page of his graphic novel Underground. Now, the typical reaction is to freak out, scream “piracy,” whine about “losses” and demand that “something must be done.” But, in a world where obscurity is really a much bigger issue than “piracy,” another option is to actually engage with those fans who liked his work so much that they put in the effort to share it with the world. And that’s exactly what Lieber did. He went to the site and actually started talking about the work with the folks on 4chan (image from Paul): Nice. But, what did it actually mean? Well, the day after he engaged with fans on 4chan, Lieber posted a blog post highlighting his sales. As he says, “pictures help us learn.” But “piracy” is killing the ability to earn money, right?

Marvel Claims Jack Kirby Was Just A Workerbee; Has No Right To Reclaim Copyright On Marvel Characters

Last fall, we wrote about how the heirs of famed comic artist Jack Kirby had started alerting everyone that he intended to reclaim his copyrights on various popular comic characters, such as Spiderman, the Hulk, Iron Man, The Avengers and others, using the termination right in copyright law that was recently used by the heirs of one of the creators of Superman to reclaim some of those rights. Not surprisingly, Marvel, who owns many of the characters that Kirby’s heirs want to take back, isn’t particularly pleased about this (especially since many of those characters have recently become extremely lucrative movie franchises). So it has gone to court to insist that Kirby had no right to the characters and that his work with Marvel was a “work for hire” situation, where Marvel retains all the copyrights. Kirby’s heirs, not surprisingly, disagree. They point out that Kirby worked out of his own house as a freelancer with no contract or employment agreement.

I have to admit that I’m not a fan of the termination right for copyright, because it makes a huge mess of things. However, given that it’s there, it’s really pretty sickening the lengths to which big entertainment companies will go to try to block creators from using it. Remember, these are the same giant entertainment companies who will insist time and time again that they need special government protections to “protect the artists.” But any chance they get they’ll screw those artists over. You may recall the attempt a decade ago by the RIAA to change copyright law in the middle of the night (literally) by having a staffer slip four words into a larger piece of legislation that would have avoided some of these termination claims. The entertainment industry has no interest in protecting the artists. It only wants to protect its bottom line — and if that means screwing over the artists, it will do so at every turn.

from the Kryptonite vs greed dept

In August, we wrote about the latest in the long saga of the heirs of one of Superman’s creators trying to regain the rights to Superman. Copyright law, among its many complexities, includes a provision for terminating the assignment of copyrights, such that the original creator can get them back over time. Getting into exactly how it works and the reasoning behind it isn’t worth mentioning here. But it’s created the mess with Superman, and now the lawyer who helped win that case is helping the heirs of Jack Kirby, a comic book artist who worked on a bunch of comic books, to send out 45 letters warning pretty much everyone in Hollywood that they intend to take back the copyrights on a bunch of works, including the X-Men. Of course, the earliest they can actually do this is in 2014… so why announce it now? Well, one guess is that with Disney in the process of buying Marvel Comics, the studio might not want to have to deal with the complication and may be willing to pay off the heirs now. (Update: Some lawyers have pointed out that you have to alert the copyright holder a few years in advance to terminate… so that’s another reason). While some may find it amusing to see the Hollywood studios suddenly on the “wrong” side of copyright law, the whole situation is pretty ridiculous. It’s nothing more than a pure money grab on the part of heirs — people who had nothing at all to do with the creation of a work.

Paddy Dwyer writes "The comic book publisher Boom Studios announced about 2 weeks back that they were going to release the full first issue of a new comic called North Wind online free the exact same day as it was released in shops. They also plan to do this with the remaining 4 issues in the mini series. There was some retailer outcry when this was announced but it didn’t last long. As the book quickly sold out with Diamond Comics Distributors. Then even though the book is still available online for free they are planning on doing a second printing to fulfill remaining back orders for the book. Also the book was released in CBZ format which is to comics what the mp3 is to music. There is no DRM and it is of very high quality."

This comes just a couple months after Tim Lee pointed out why comic book publishers should free up their content. He also discussed how the big comic book publisher, Marvel and DC have, instead, chosen to lock up their content and threaten people for sharing their books online. Yet, here we are, once again, with an example where the companies who embrace the ability to use free content as a promotion are finding that it actually helps them sell more.