Stories filed under: "cupcakes"
Expand All Posts Collapse All Posts

Cupcakes were really trendy for a while, but they’ve probably jumped the shark by now. Still, who doesn’t enjoy a good cupcake every now and then? Here are just a few examples of some interesting twists on the traditional cupcake — that include a few more animal parts than you might expect (or want).

DailyDirt: Cupcakes With a Twist

An amazing number of cupcake stores have been popping up everywhere over the last few years, in what’s been called the “Cupcake Bubble”. (Just check out CRMB on NASDAQ for one public company dedicated to cupcake bakeries — or the reality show about cupcakes, Cupcake Wars.) These tasty treats are not only easy to make cheaply, but scaling up also doesn’t require too much effort. As a result, there are tons of different cupcake choices out there, and stores are distinguishing themselves by offering cupcakes with a twist. Here are just a few examples.

While the TSA continues to not catch terrorists, it is catching flak for its decision last month to confiscate a cupcake. Even more bizarre, the TSA is continuing to defend the confiscation, claiming that since this cupcake was in a jar it meant that the frosting was considered a gel and subject to the totally silly and pointless 3 oz. rule.

I wanted to make it clear that this wasn’t your everyday, run-of-the-mill cupcake. If you’re not familiar with it, we have a policy directly related to the UK liquid bomb plot of 2006 called 3-1-1 that limits the amount of liquids, gels and aerosols you can bring in your carry-on luggage. Icing falls under the “gel” category. As you can see from the picture, unlike a thin layer of icing that resides on the top of most cupcakes, this cupcake had a thick layer of icing inside a jar.

In general, cakes and pies are allowed in carry-on luggage, however, the officer in this case used their discretion on whether or not to allow the newfangled modern take on a cupcake per 3-1-1 guidelines. They chose not to let it go.

Or maybe they were just hungry. Either way, rest assured that terrorists who get through security won’t be able to get fat on cupcakes.

Or… maybe they can. A bakery in Rhode Island, picking up on this ridiculousness and sensing a marketing opportunity, is now offering a TSA-complaint cupcake, complete with exactly 3 oz. of frosting… a plastic baggie, and a faux boarding pass declaring compliance: 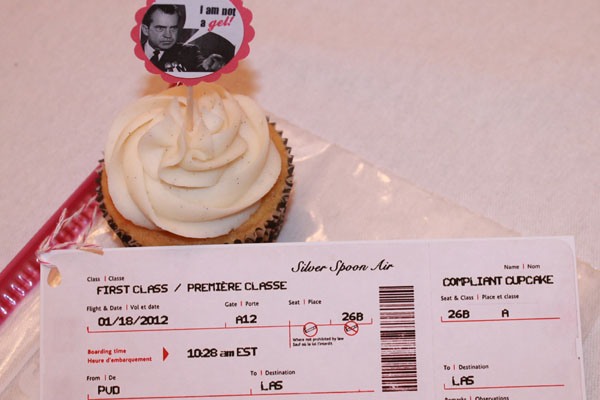 Do Morons In A Hurry Eat Cupcakes?

Reader GeneralEmergency alerts us to yet another bizarre trademark lawsuit — this time involving cupcake shops. Apparently, there’s some fancy cupcake-store-to-the-stars, called Sprinkles Cupcakes that has trademarked putting a circle with a dot in the middle on top of its cupcakes. Another cupcake company, Famous Cupcakes also started putting a circle with a dot on top of their cupcakes — so now they’re heading to court. I’m sure this is what the original creators of trademark law intended: stopping dastardly cupcake makers from decorating their cupcakes in a similar manner.