Techdirt is off for the long weekend! In the mean time, check out our new face masks and other gear on Threadless »
Stories filed under: "custody"
Expand All Posts Collapse All Posts

Parents have a lot of decisions to make that they may be encountering for the first time — choosing between formula or breastmilk, letting a kid have more than 2 hours of screen time per day, determining when a kid is mature enough to be left alone, and the list goes on. Decades ago, some of these decisions didn’t even exist, but recently, it seems debatable parental choices can be criminal offenses under exactly the wrong circumstances. Here are just some examples of the increasing societal judgment of bad parenting.

Another In Custody Death For The Kern County Sheriff's Dept. — The Third In Four Months

The Kern County Sheriff’s Department has no problem taking people into custody. It just seems to have trouble keeping them from dying. For the third time in four months, an arrestee has died while in custody.

Back in May, Kern County deputies responded to a call about a possibly intoxicated man sleeping in someone’s yard. The man’s combativeness (not much of which is shown on the available video of the “arrest”) apparently could only be handled by nine law enforcement officers, who deployed batons and a police dog in order to restrain him. By the time it was all over, the man (David Saul Silva) had “become unresponsive” (nice use of the passive voice) and was rushed to the hospital, where he died.

According to the official coroner’s report, the batons and attack dog, along with the weight of any number of officers on his back, had nothing to do with his death. The coroner’s call? Heart disease.

On July 1st, Kern County deputies arrested 51-year-old Ruben Ornelas for heroin possession and took him to Central Receiving in downtown Bakersfield. At 1:30 am on the 3rd, Ornelas was “found unresponsive” in his holding cell and rushed to Mercy Hospital, where he was pronounced dead. A Sheriff’s Department spokesman said Ornelas was in a cell with others, but there was no sign of a struggle or trauma. The official cause of death?

The sheriff’s department says there were no signs of foul play, and the coroner’s office told The Daily News that the cause of death was determined to be “hypertension due to cardiovascular disease.”

And now, there’s a third person who hasn’t survived the department’s policing.

According to a press release by the Kern County Sheriff’s Office, deputies responded to the Walgreens store at 2629 Mt. Vernon Ave. at about 8:35 p.m. regarding suspicious persons. Two males were inside the store acting strangely, and both were possibly under the influence of a controlled substance.

Officials said Ledesma became uncooperative when the deputy attempted to detain him. Ledesma resisted arrest and fought with the deputy for approximately two minutes before additional deputies arrived, including a K-9 unit.

“Mr. Ledesma was resisting, kicking the officer. He was struck with a baton several times to gain compliance. He would not submit to the arrest. He was warned that the K-9 would be placed on him if he didn’t stop resisting,” said Sheriff Donny Youngblood.

Sheriff Youngblood says when a deputy arrived to a call at Walgreens on Mount Vernon Avenue, he found Ledesma in a nearby park and believed he was under the influence of PCP. The deputy called for backup and the sheriff says five deputies tried to subdue Ledesma, including the K-9 officer on patrol near the scene.

“They said they struck him with batons. There’s no mention that he was struck in the head with a baton,” said Youngblood.

No mention, eh? By who, his deputies? Not surprising, as hitting people in the head with batons is against department policy. Here’s the video the Sheriff’s Department has made available, captured by a bystander’s cell phone.

This, too, is “under investigation” and the department is still waiting for the full coroner’s report. A preliminary toxicology report has been released, and unsurprisingly (read that however you want), the coroner found several drugs in Ledesma’s system.

[R]eport revealed Ledesma had PCP, amphetamines and Benzodiazapine in his system.

My guess is that this death will also be ruled “accidental” at worst, or chalked up to a preexisting heart condition. Being beaten, restrained and attacked by a dog will have had nothing to do with it. There’s a pattern here and it goes back further than the last four months.

In December of 2010, three deputies arrived at Jose Lucero’s house to speak to him about the repeated bogus 911 calls he’d been making. According to Lucero’s family’s lawyer, Lucero was a recovering meth addict who suffered from mental illness. Apparently, Lucero had fallen off the wagon and was using meth again, which, combined with his mental problems, led him to believe a friend of his was being assaulted — hence the repeated calls to 911.

When Lucero didn’t cooperate, the three deputies (who were joined by a fourth) tased him 29 times, hit him 33 times with batons and deployed pepper spray. All of this happened in front of Lucero’s parents, whom the deputies repeatedly asked to leave. The incident lasted all of six minutes, and Lucero was dead by the end of it.

The cause of death according to the coroner?

Lucero’s official cause of death was cardiac arrest following police restraint in association with methamphetamine intoxication.

A bad heart, some meth in the system and a little “police restraint” was all it took to kill Lucero in less than six minutes. Why, he practically brought it on himself with his drug use and weak heart.

The coroner may have declared Lucero’s death to be at least two-thirds Lucero’s fault, but a jury found the four officers guilty of using excessive force and awarded his parents $4.5 million in damages. Despite this decision, the department’s counsel kept blaming the outcome on everyone but the responding deputies.

[T]he parents were repeatedly told to leave the home and kept coming back to see what was happening, said Chief Deputy County Counsel Mark Nations. That makes them at least partially responsible for any emotional distress, he said.

Way to blame the victims, counselor. I’m not surprised Lucero’s parents didn’t accept the deputies’ invitation to “please leave the house so we can assault your son without any witnesses.” Unfortunately, refusing to leave didn’t change the outcome, either.

But here’s the issue: the department goes overboard, deploys excessive force and somehow, the coroner finds that everyone the department restrains to death has heart problems. Lucero might have survived being tased or beaten roughly every six seconds if he’d been blessed with a stronger heart. What appears to be excessive force is always found to be by-the-book restraint.

The Kern County Sheriff’s department’s close relationship with the coroner is far from unusual. Sheriffs and coroners are generally intertwined. But in the case of this sheriff’s department and its skill at deathbringing, it might be better to bring in someone more independent. While I’d like to believe the coroner’s office only reports to Sheriff Donny Youngblood (here’s a PDF showing the chain of command [page 2]) rather than caters to him, these recent incidents don’t give me much confidence.

What seems to be happening is that once the coroner decides the officers’ actions weren’t directly related to the death of the person in custody (i.e., crushed larynx, signs of asphyxiation, head trauma), the sheriff clears his deputies of any wrongdoing. Even the awarding of $4.5 million in a wrongful death suit failed to result in any further punishment of the officers involved, one of whom (Ryan Greer) was also involved in the David Saul Silva case.

In addition to the coroner’s ability to find latent heart problems behind every tasing and beating, the sheriff’s office itself has been less than forthcoming with additional evidence. In Ledesma’s case, the Sheriff’s official website says there’s footage from both a cell phone AND a security camera and that both are available. However, a visit to the official Youtube account of the Kern County Sheriff’s Office shows that only the cell phone footage has been uploaded. What’s on the other recording? (Most notably missing from the cell footage is the police dog in action. You can see the aftermath in the upload but not the actual attack, as well as nothing previous to Ledesma being on the ground.)

In Silva’s case, the California Highway Patrol has continued to refuse to release its dashcam footage and the Sheriff’s office itself hasn’t released anything captured by cameras or mikes worn by other officers.

Youngblood also has had help in keeping his own backyard from being cleaned up. Last August, Jaime Duran was beaten severely by deputies while being taken into custody. Of course, the officers were very careful not to hit him in the head with their batons, but they were very enthusiastic about making sure his legs didn’t go untouched. (More pics here and here.) 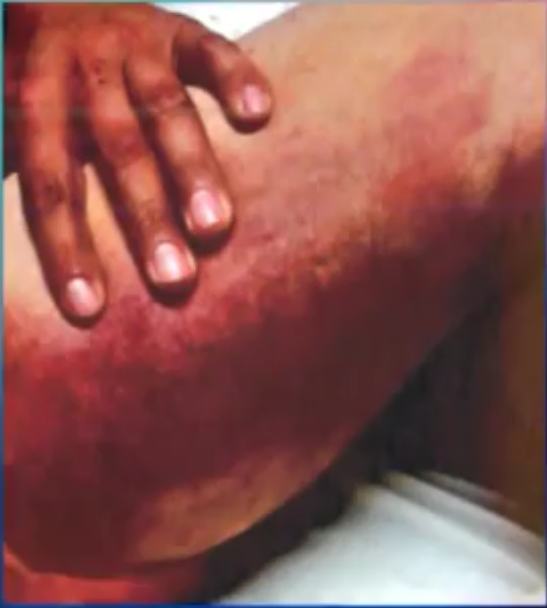 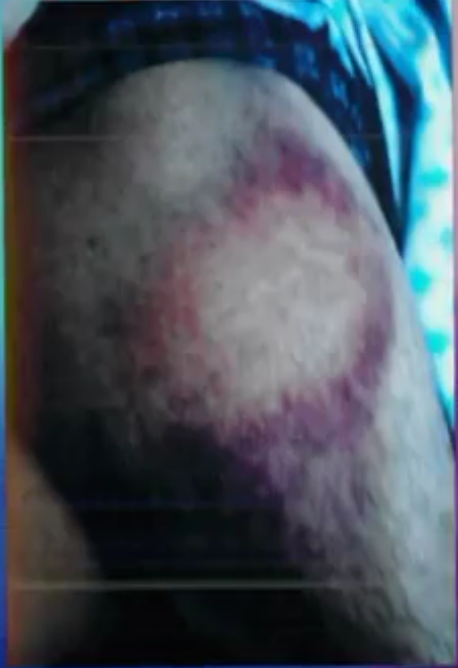 After Duran filed a claim against the county, Internal Affairs sent the case to the DA’s office, looking to prosecute on charges of excessive force and filing a false report. The DA’s office refused to prosecute, saying it couldn’t prove these charges beyond a reasonable doubt. And again, the Sheriff’s department itself held back information, including helicopter footage which captured the incident.

There seems to be an acceleration of incidents involving Kern County deputies, and given the responses from the district attorney, the coroner’s office and Sheriff Youngblood, it’s going to keep on accelerating. “Internal investigations” tend to clear deputies of wrongdoing. Coroner’s reports latch onto pre-existing conditions as the cause of death, and seem to give no weight to the fact that being beaten (even by-the-book) and restrained by multiple deputies may have something to do with the resulting deaths. These reports imply that the deceased were walking dead anyway, and the deputies’ actions only possibly accelerated an eventual outcome.

Even paying out a settlement in a wrongful death suit has failed to alter deputies’ tactics, and why should it? The deputies were cleared by the Sheriff’s office of any wrongdoing. Youngblood says he gives no preference to his deputies when under investigation and treats them “like any other member of the public.” But as jpmassar points out in his discussion of the Silva beating at the Daily KOS, that can’t possibly be true.

Can you imagine if nine random people found a drunk on the sidewalk and beat him to death, videoed by numerous witnesses. How long do you think it would be before they would be in a jail cell and arraigned on millions of dollars bail (or more likely the DA would demand none at all)?

The prevailing argument seems to be that these deputies do what they need to do to take dangerous and resistant suspects into custody. The danger aspect is always played up when defending against excessive force allegations and the implication is that these reactions were prompted by officers who feared for their own safety when confronted by resistance. But here’s the scorecard: three people “restrained” to death (and a fourth dying while in jail) in three years by Kern County deputies. Contrast that with the department, which has had three deputies killed in the line of duty — in 30 years.

The tactics deployed far outweigh the threat, and the lack of accountability provided by Youngblood’s office only encourages further abuse.

Techdirt is off for the long weekend! In the mean time, check out our new face masks and other gear on Threadless »
Essential Reading