Two and a half years ago, Daily Variety, the big Hollywood trade magazine, basically ceded the entire online world to its main competitor, The Hollywood Reporter, by putting up a paywall. At the time, it bizarrely claimed that doing so would mean it wouldn’t have to cover “gossip, half-truths and anonymous rants.” Apparently, you have to do that sort of thing if you don’t have a paywall. Who knew? Of course, the reality was that, over the past few years, The Hollywood Reporter has established itself as a massive online presence with quality reporting, while Daily Variety basically became an also-ran that no one cared about anymore… leading to its recent sale. The new owners have announced that the paywall will be coming down, and reporters there were thrilled:

Many Variety reporters and editors have been frustrated that their content is less read online than that of competitors such as the Hollywood Reporter and Penske-owned Deadline, in part because it is only available to paying subscribers.

Attendees at the meeting in Variety’s mid-Wilshire Boulevard office applauded when Penske said he would remove the publication’s digital paywall.

It appears the reporters there recognize that relevance is kind of important in the media business — and charging too much for information that your competitors are delivering (often in a better format) for free just isn’t a way to remain relevant.

We’ve written a couple times about the absolutely ridiculous lawsuit that publishing giant Reed Elsevier filed against the punk band The Vandals. At issue was the fact that, years ago, the band put out an album, in which its logo was designed to parody the logo of Daily Variety, the Hollywood trade rag published by Reed Elsevier. 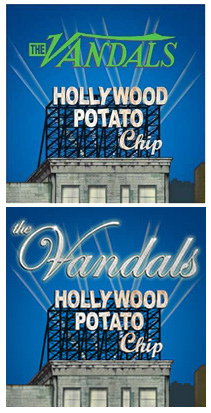 Way back when the album was first coming out, Variety had sent a cease and desist letter, and rather than fighting it (with a very strong fair use/parody claim) The Vandals caved and agreed not to use the image. However, the image can still be found online — but not on sites controlled by the band. So Reed Elsevier and Variety are suing the band for somehow not magically stopping these other sites from using the image.

I had thought that once the ridiculousness of this became public, Reed Elsevier would quickly back down, but instead it dug in. Even more ridiculous is that it sued in Delaware, knowing that this would make life more difficult for the band, which is based in LA. Making things even more interesting is that the band’s bassist, Joe Escalante, is also a former entertainment industry lawyer, though not a litigator. But, not one to back down from a fight, he decided to represent the band, went about learning the basics of litigation, and even got himself admitted to practice in Delaware.

Escalante emailed us to let us know that all of this has paid off so far, as the band has won the first round of the legal fight, and got the suit tossed out in Delaware and sent to California where it should have been filed in the first place. The short and sweet court order makes it clear that the judge finds it distasteful that Reed appears to have purposely filed the lawsuit across the country from the band to make life difficult for the band. You can see the full order below, but the key point is in the footnote, where the court notes that it certainly could have jurisdiction on the case, but given the circumstances, it feels that it is not appropriate, clearly suggesting that it recognizes the use of the court in Delaware was mainly to inconvenience the band:

The court recognizes that it could, if it were so inclined, choose to exercise jurisdiction over this matter and permit this case to proceed here in Delaware, given that a settlement agreement between the parties contains a clause that names Delaware as the forum for litigating disputes arising from the agreement. That settlement does not bind this court, however, and given the facts and circumstances surrounding this case, the court has decided in its discretion to decline to exercise jurisdiction. First, all relevant conduct and activities appear to have taken place in California, where the defendants reside and operate. Similarly, it appears that the Central District of California would be a far more convenient forum for trial, since the court’s reading of the complaint and other documents in the record is that the vast majority of documents and witnesses pertaining to this case are in California. Furthermore, the consent judgment that underlies the plaintiffs’ complaint was entered by the United States District Court for the Central District of California, and states that that court retains jurisdiction for the purposes of enforcing the consent judgment and related permanent injunction. It would be far better for that court to determine whether the conduct in question falls within the scope of the consent judgment and permanent injunction. Finally, given the defendants’ apparently limited financial resources and the significant costs associated with litigating in Delaware, the court finds that the defendants would be unfairly prejudiced if they were forced to litigate in this district.

In response to this ruling the band has been mocking Variety and its lawyers relentlessly. The link above goes to a pretty incendiary blog post which, frankly, might also open the band up to defamation charges, but that would really only be digging Reed Elsevier deeper into a truly pointless legal battle. Separately, the band has used our favorite movie creation tool, Xtranormal to create this rather hilarious (and probably NSFW) video of a “fictitious meeting” between Variety’s outside lawyer on this case and Variety’s editor. It made me laugh:

Daily Variety Refuses To Back Down On Vandals Lawsuit

Earlier this year, we wrote about how publishing giant Reed Elsevier had decided to sue the band The Vandals, for supposedly violating a previous agreement not to use an album logo that parodied Reed’s publication, Daily Variety: While the band had agreed not to use the logo, images with the logo were being found on various websites, but it was other sites using it, not the band promoting it itself. Furthermore, it’s clearly a parody, which should be legal (though it’s complicated by the band’s agreement to stop using the logo, so the contractual issues take precedence over the trademark/parody questions). What’s amazing is that after all the negative attention being put on Reed over such a ridiculously minor issue, the company refuses to back down and is still pushing forward with the case. It’s difficult to see why this makes sense in any way. Reed is a publishing giant. It hardly needs to win this lawsuit, and it’s got nothing to do with protecting its trademark any more. Besides, this lawsuit has done a hell of a lot more to promote the old logo than anything that happened before.

Where this gets even more interesting (or potentially dangerous, depending on your opinion), is that the band’s bassist, Joe Escalante, is a former entertainment lawyer who is representing the band in the case. Despite not being a litigator, he’s been learning about litigation and even got himself admitted to practice law in Delaware, where the lawsuit was filed (the band is trying to get the case moved to LA). Escalante has been publicizing all of the aspects of the case, and the band is even holding a “fundraising” concert to fund the legal defense.

brian williams alerts us to the news that the punk band The Vandals was recently sued by publishing giant Reed Elsevier because back in 2004, the band put out an album that used the font used by Hollywood trade publication Daily Variety for its own name on the album cover:

After the album was released, the band and its record label were sent a cease-and-desist over the logo. Rather than fight it (and they had a strong parody case), the band and the label complied with the C&D and stopped using the logo, replacing it with the one you see at the bottom of the image above. The Vandals seems quite confused over the nature of the lawsuit, seeing as they complied with the C&D more than five years ago:

We do not have this logo, or any other of their logos on any of our sites under our control. They are telling us that it is still on the Internet but they wont tell us where it is. Instead, they have demanded a HUGE sum of money. I mean HUGE, OUTRAGEOUS, and IMPOSSIBLE TO RAISE; and $25,000 for their attorneys to cover all the damages they have suffered from what they call a breach of our settlement agreement.

We have breached nothing. We are just a punk band and a small insolvent record label trying to keep stuff on the shelves and pay royalties to other artists.

Website The Wrap asked Reed Elsevier for comment and got the following message, which doesn’t address any of the actual issues:

“The stylized VARIETY mark is a very well known and valuable trademark which the Vandals misused,” Henry Horbaczewski, counsel for Reed Elsevier, wrote in an e-mail message to TheWrap. “We sued them, and they accepted a settlement agreement in which they promised to stop misusing our mark, because we wanted to stop the misuse, not their money. They then ignored their agreement.”

Horbaczewski added: “[Vandals drummer Joe] Escalante is a lawyer. He should have known the consequences of his actions.”

It’s difficult to see how they have much of a case unless there’s a lot more going on here. First of all, the use of the logo here is almost certainly protected as a parody use — and it’s difficult to believe that anyone (moron in a hurry or not) would face a likelihood of confusion and believe somehow that the album was endorsed or supported by Daily Variety. Even so, if it’s true that The Vandals are not selling anything with this logo, then it’s difficult to see how Reed Elsevier can claim that this is “use in commerce.” This whole thing seems like a pointless lawsuit for no reason whatsoever. Perhaps Reed Elsevier’s lawyers would be better served making sure that the company isn’t publishing fake, ghost-written journals at the behest of industry interests, rather than suing a random punk band for a parody…